Ghost does the devil’s work 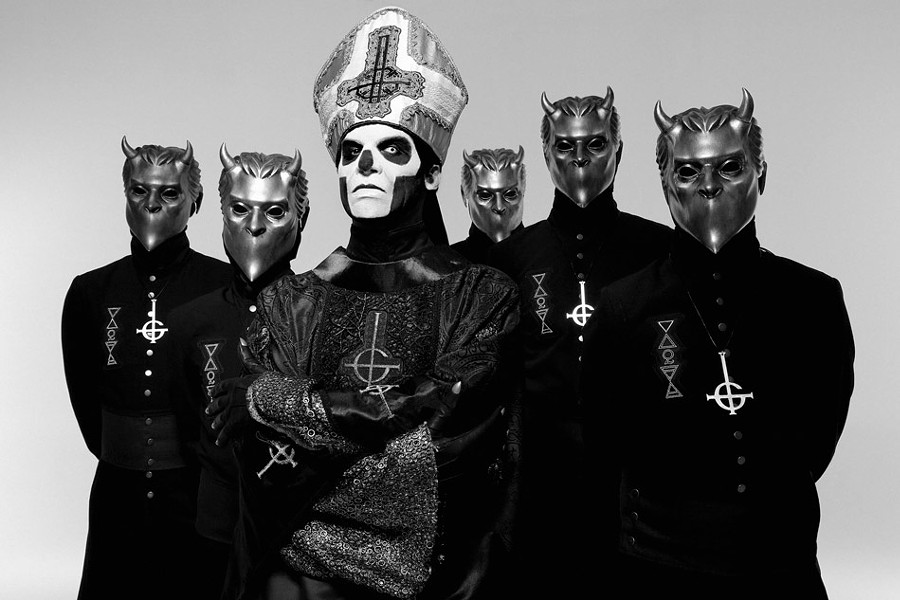 PHOTO PROVIDED Ghost's Papa Emeritus and the Nameless Ghouls do the devil's work.

Those in the metal world, especially ones more nefariously centered, present core beliefs and behaviors couched in theatrical evil: lightning speed, crushing volume, and gruesome lyrics emitted from somewhere deep within the vocalist's bowels. It's all about the head-bang. But through this bombastic display, it can frequently come off as a lampoon of evil, a pastiche of doom.

Then there is Swedish metal band Ghost, a spectacle in heresy with an undercurrent of evil that is frightening and disturbingly genuine. Satanic lyrics put the band in a darker music phylum, yet listening to its intricate melodies and guitar patterns, the band sounds more akin to a progressive rock-metal hybrid than straight-ahead metal. What started as a riff inadvertently spawned a band of nameless ghouls — each simply referred to as Nameless Ghoul — and their leader, Papa Emeritus, to pursue the project that would come to be called Ghost.

"We started as a low-key project," one of the Nameless Ghouls says on the phone from his home in Linkoping, Sweden. "Back almost 10 years ago, I was playing bass and recording an album with this band. During a sound check, this riff appeared out of nowhere. It was the most heavy metal riff that had ever existed, and it was like, 'Oh, this could be some kind of project that someday could actually be something.' A little later, the song 'Stand by Him' was written out of that. And I said to myself, 'If I could come up with a few more songs maybe we could call it something.'"

Low and behold, by 2008, they had a handful of songs and started recording some demos.

"At that point, we started calling it Ghost," the Ghoul says. "And because to our minds it had a certain picturesque sound, we figured this is going to be some kind of theatrical band, maybe we should let it grow even more, crafting it more, making it better, so we could present it along with an album. We never saw this as a typical band — rehearsals on Wednesday and Thursday, and then start playing at pubs. We never saw it as taking the normal route. It was meant as a project — maybe an album, play a few festivals, and that would be it."

It would seem Ghost had low expectations. "It was rather low ambition," says the Ghoul. "We weren't going to sign with a major label; we weren't going to tour. Still if we did play, it was going to be huge. Kind of like what Venom did in 1985. They never toured, I mean they did one tour of six dates with Metallica opening ... they looked huge."

Though the band was a fledgling endeavor, the word, according to the Ghoul, was out. By the time the first album was about to be released, there was interest in the Ghost and "we were being asked by a lot of bands to open for them."

Ghost presents music and a live show that rivals any band today as well as the classic progenitors you'd expect. Ghost's performances, though, are a little more laconic and subdued. Papa Emeritus is a riveting presence, moving slowly across the stage, dressed like a zombie pope, and surrounded by his five nameless, masked acolytes and their instruments. And where as you might expect a demon wail, Papa Emeritus sings with beauty and melodic splendor as if in awe of the words. Still, it has the eerie feel of a satanic benediction.

This show, the band's precision, and the mystery that surrounds it has earned Ghost numerous awards and a 2016 Grammy win for "Best Metal Performance" for its song "Cirice."

"I admire many bands for different things," the Ghoul says. "There are bands that have relevance to us obviously in that we're a shock rock band. You can't neglect bands like KISS and Alice Cooper, they have been a huge influence. They've obviously paved the way for a band like ours."

Pressed if there exists a common thread running throughout Ghost's catalogue, the Ghoul scratches his chin.

"I'm still trying to figure that one out," he says. "We're three albums into it now. We're just about to release an EP, and I'm still not certain what really makes a typical Ghost song. And I pride myself that up to this day there's nothing in any of our songs that reminds me of another that we've already done, or it doesn't sound like a typical Alice Cooper song or Blue Oyster Cult, or whatever. But there's still a certain element that makes it Ghost-like.

"I think it's more of a tonal thing, melody wise. I think to America's and even Britain's Anglo-Saxon point of view," he says, "we sound slightly foreign because we're Scandinavian. And in Scandinavia we have a certain melodic language that is more melancholic and slightly more folky — as in old Swedish folk music. Even though I'm not an avid collector of folk records, there are definitely a lot of folk elements and you just grow up listening to it, hearing it on TV. For example ABBA; ABBA is extremely Swedish folk."

Ghost has no plans of giving up the ghost. The masks will stay on, the satanic soliloquy will remain.

"As far as Ghost goes, we will never drop the theatrical elements and start doing something 'normal.' We have a great respect toward what we are. That's not the same thing as swearing to be anonymous the rest of our lives. But we can promise that we will never take our masks off and just start doing shows in t-shirts and stuff. That would be in poor taste."