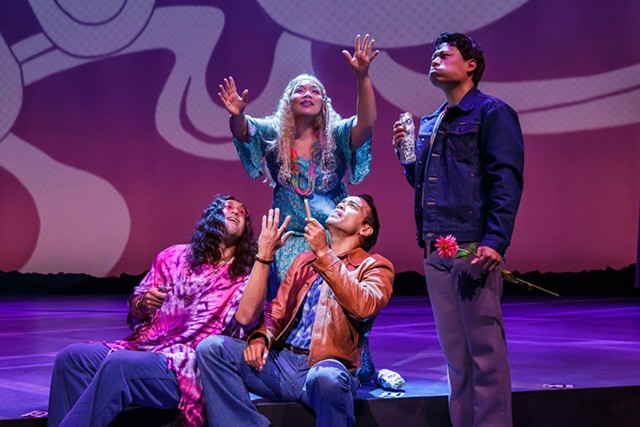 It’s been so long since I’ve sat in a physical theatre that I can’t remember if audiences usually applaud as soon as someone steps onstage to welcome them. Perhaps. But I definitely don’t remember the applause feeling as euphoric as it did during the first moment of “Vietgone.” The Geva Theatre Center production, originally scheduled for May 2020, is presented now through Oct. 24 with several COVID protocols in place (including a mask mandate for the audience).

The production, directed by Pirronne Yousefzadeh, is worth the wait.

The opening “Welcome to Geva” comes from playwright Qui Nguyen (played by Hansel Tan), who cues the start of the pre-show announcements. With this breaking of the fourth wall, the show immediately establishes its playful, irreverent tone. The ensemble comes onstage, acknowledges the number of white people in the room, and introduces the premise of the play: It’s 1975, and the playwright’s parents are Vietnam War refugees in America.

This play does not attempt to realistically portray events. Instead it’s a boisterous, silly, and rowdy re-imagination, starting with the language. In the heightened reality of “Vietgone,” the Vietnamese immigrants speak how the playwright likes to imagine they would — not in Vietnamese or with accents, but in a contemporary English that’s presumably similar to how the playwright and his peers talk.

Fair warning: there’s plenty of swearing. While some theatergoers may complain about excessive profanity, I hope the show finds an audience that is more amused by the sex and swearing than some in the Sunday matinee seemed to be.

Nguyen’s script explicitly acknowledges that it’s trying to subvert racist depictions of Asian people in pop culture. To that end, the play creates its own caricature to capture how incomprehensible and foreign white Americans are to new arrivers to the country (an example of a fluent English sentence: “Cheeseburger, baseball, discrimination”).

“Vietgone” throws a lot of things at a wall and hopes they’ll stick. There are direct addresses, usually in the form of rap soliloquies. Comic book-inspired sequences. Reenactments of American romantic comedies. A kung fu fight with ninjas (delightfully staged by the movement/fight/intimacy director Rocio Mendez).

The play certainly can’t — and shouldn’t — do everything. One disappointment, though, was how little attention was given to anti-Black racism in favor of a view of America as a generally superior land of opportunity. This was specifically a problem because of the frequent use of rap; Nguyen could have been more thoughtful in acknowledging the play’s debt to Black Americans.

Overall, the production handles the glorious chaos of the script beautifully. Nguyen (the real life playwright, not the onstage persona) is known for his comic-book aesthetic, which is brought to life here with a backdrop of digital art that indicates time and place.

Yousefzadeh knows when to layer in music and lights — such as when the audience needs a distraction from the clumsy half-rhymes of the raps — and when to pull back and let the focus be on the actors’ performances, which are a high point of the production.

The characters are flawed — Tong (Geena Quintos) is a self-declared bitch with naïve expectations of America, and Quang (Kurt Uy) cheats on his wife. The actors have enough charisma and charm that you’re rooting for the characters, even if you don’t agree with their decisions.

All of the eclectic storytelling techniques help tell a tale that, at its core, is fairly conventional. As the playwright says in the beginning, “This is not a story about war — it’s a story about falling in love.”

The couple doesn’t meet until the end of Act I, but once it does the rest of the play follows the predictable beats of boy-meets-girl, boy-loses-girl, etc.

As comforting as the familiarity of a well-plotted romance can be, it’s the love between the parents and their children that give “Vietgone” its emotional weight. I loved watching Tong and her mother, mutually reluctant to be stuck with each other in America, adapt to their new life together.

In particular, the framing device of the piece — the playwright Nguyen appearing as a character onstage — portrays a son trying to understand and respect his father’s perspective of the Vietnam War. The final scene elevates what would otherwise be an entertaining romantic comedy into a gorgeous story about the love between father and son.

No single play can speak for an entire culture, and there need to be more shows on the American stage about Vietnam from Vietnamese perspectives — especially to counteract the white savior narrative of the somehow-still-popular musical “Miss Saigon.” “Vietgone” is an entertaining, well-crafted contribution to this canon, and Geva’s production is a warm welcome back to the joys of in-person theatre.