The set is sparse, and the play opens with only a spotlight on the desk where Jane writes the story that she dictates directly to the audience. Of course, it’s not her full life story. This production abridges the 600-page novel, chopping out Jane’s childhood and a hundred pages of character development to start when she moves to Thornfield to become a governess under Mr. Rochester’s employment.

Jane addresses the audience with direct quotes so often that at times the play feels like an enhanced audiobook. With the exception of vibrant and puffy period dresses, designed by Ilona Somogyi, much of the world-building and action is left to the audience’s imagination. Sliding panels and a rotating turntable slowly bring out furniture that hints at rooms around Thornfield or the garden outside. Major plot moments—like Rochester falling off a horse when he first sees Jane, or a midnight fire in a bedroom—happen behind a large wooden panel while the audience waits for Jane to narrate what we’ve missed.

It’s a huge testimony to Helen Sadler, who stars as Jane with phenomenal stamina, that this production manages to be engaging. Sadler plays Jane less as the moralistic introvert of the novel and more like an Elizabeth Bennett: feisty, clever, confident, and quick. Mr. Rochester, played by Robert Beitzel, physically towers over her, but she commands attention as the focal point of the show. The show reaches its high points when Sadler gets full rein of Bronte’s iconic language, proclaiming “I am no bird, and no net ensnares me,” and “Do you think because I am poor, obscure, plain, and little, I am soulless and heartless?”

Sadler and Beitzel are well supported by an ensemble that plays over a dozen side characters, appearing in short bursts before moving on to the next role. The actors capture each role so convincingly that one needs to check the program to confirm it was Awesta Zarif who plays both the snobby Blanche Ingram and the ominous Grace Poole, or Grayson DeJesus who embodies both righteously angry Mr. Mason and the gently earnest St. John Rivers.

The cast does a fine job of bringing Charlotte Brontë’s characters to life, but doing so only highlights how inappropriate this narrative is in the aftermath of the #MeToo movement. This is certainly not to fault Charlotte Brontë for failing to anticipate the needs and sensibilities of audiences long after her death. However, one should question the decision to launch a theatrical season with outdated depictions of romance and madness.

Mr. Rochester is a walking red flag of a suitor. He spends over two hours manipulating emotions, disregarding women and their feelings, threatening violence, gaslighting Jane, deflecting responsibility, bullying his employees, and enacting a racist stereotype. When called out for lying, he immediately rationalizes his dishonesty, usually by blaming others. Beitzel plays him with a boyish charm and playful innocence that borders on sociopathic.

The show revels in the lush language of Rochester’s courtship to Jane, as well as the novel’s Gothic elements, with offstage manic laughter, fog and candles, and haunting strings. The source of this impending horror? Mr. Rochester’s first wife, the madwoman in the attic. She makes a dramatic appearance in the second act, played with an animalistic ferocity by Felicity Jones Latta. Given a broader cultural understanding of mental health, it’s deeply off-putting to see a mentally ill woman portrayed as an inhuman threat. Once her purpose as a spooky thrill ends, she’s quickly brushed aside while her husband cries in a fetal position about how wretched he is because his plan to travel to colonized Jamaica and marry for money backfired. 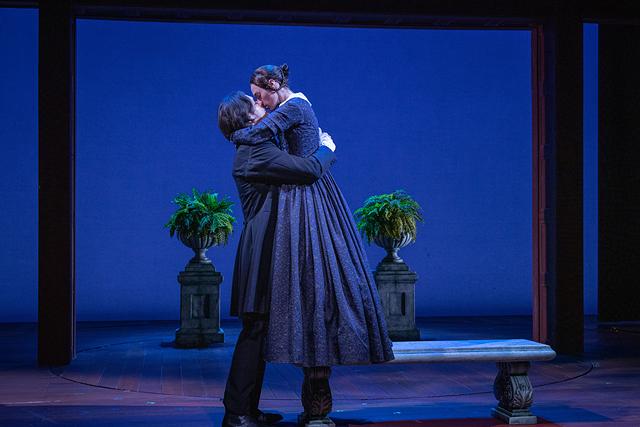 In the end, when Jane conveniently acquires a fortune and connections, she returns to Mr. Rochester on her own terms. Women often struggle to stay away from their abusers. Sadler performs the famous line “Reader, I married him!” with gusto, and the audience swoons and applauds. The true horror of “Jane Eyre” is not the traumatized woman in the attic, but the man who put her there. Too bad the production doesn’t know it.