As Geva Theatre Center worked through how it could adapt to the pause forced on it by the coronavirus pandemic, it settled on an unconventional way to launch its 2020-21 season: a modern take on the radio plays of old.

Given the national conversation about racial injustice sparked by the death of George Floyd at the hands of a police officer, Geva also saw an opportunity to provide a platform to Black playwrights and to forge ongoing relationships with them, says Esther Winter, a well-known Rochester actor and director.

The result of that reflection is “Recognition Radio: An Audio Play Festival Celebrating Black Voices,” which will feature Black playwrights, directors, dramaturgs, and sound designers — some from Rochester and some from other parts of the country. Winter is creative producer of the four-play series and Geva’s Andrew Mark Wilhelm is its sound engineer.

“Each play taps on a subject that pertains to what it means to be a Black person in America in very different ways and in very different styles,” Winter says. The subjects may be uncomfortable to address, but each playwright approaches them “in such a way that I find to be very unexpected, very thoughtful, very relevant, and funny,” she adds. “There’s a lot of humor.”

Access to the plays, either on a per-show basis or as a discounted package, can be purchased at Recognition-Radio.com. The plays were selected and specially adapted for an intimate and immersive listening experience, according to Geva.

“You’re not just listening to a play reading,” Winter explains. “They’re not just reading from a script.” 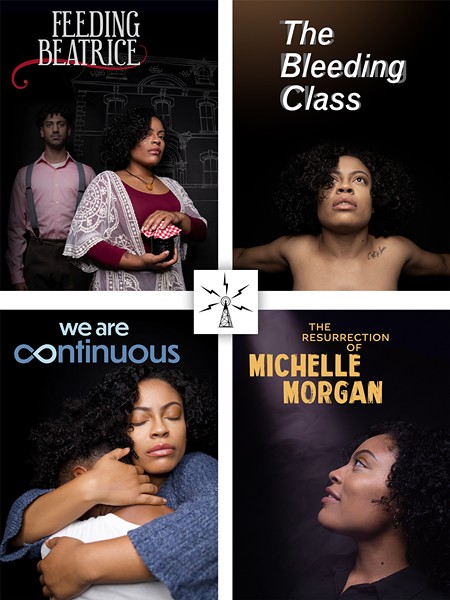 The first of the plays, Kirsten Greenidge’s “Feeding Beatrice: A Gothic Tale” will be available on Oct. 27. Daniel J. Bryant directed it, David Kelepha Samba was the sound designer, and Francisca Da Silveira was the dramaturg. The play centers on two characters, June and Lurie, who go to great lengths to afford the large suburban home they’ve dreamt about. As the story unfolds, the couple is confronted with the “unforseen realities of life in an all-white neighborhood and the true cost of the American Dream,” reads a summary provided by Geva.

“The Bleeding Class” by Chisa Hutchinson will be available on Nov. 10. It was directed by Jade King Carroll, Justin Ellington was the sound designer, and Theresa M. Davis was the dramaturg. The play follows a Dominican-American escort from the Bronx and a Black doctor as they try to save the world from a sudden outbreak of a deadly plague.

Harrison David Rivers’ “we are continuous” will be available on Nov. 24. Christie Chiles Twillie was the sound designer, and Theresa M. Davis and Otis Ramsey-Zöe were the dramaturgs. The play tells the story of Ora and her son Simon, who remained close after Simon’s coming out. But his HIV diagnosis could strain their relationship. “By turns intimate, funny, and hopeful, ‘we are continuous’ explores how people can change and how love can evolve,” reads Geva’s summary.

“The Resurrection of Michelle Morgan,” was written and performed by Christina Anderson, it will be available December 8. Robbie McCauley directed the play and Pascale Florestal was the dramaturg. The play centers on a playwright who is barely getting by with 10 different gigs, and has a harrowing experience that leaves her disillusioned with an art form she once loved. “A surprise commission for a new play reminds her of what she’s lost, and what she must do to heal age-old wounds and reclaim her voice,” as detailed in Geva’s recap.

The second half of Geva’s season starts in January and runs through July. The theater plans to offer five live productions on the Wilson stage, four of which are included in the 20-21 subscription package and the fifth of which replaces last season’s cancelled production of “Looks Like Pretty.” There will be no production of “A Christmas Carol” this year due to the pandemic.

Geva states that all live performances will be conducted in accordance with public health guidelines, including distanced seating, mask requirements, entry procedures, and cleaning protocols. It will also offer ticket holders on-demand video as an alternative to in-person attendance.

The 2020-21 Fielding Stage productions has been cancelled due to the smaller size of that auditorium and the difficulties it presents in following physical distancing guidelines. Anyone with Fielding Stage series subscriptions for 2020-21 will have the option to transfer them to the 2021-22 season.

This article has been updated to correct the date of availability for "The Bleeding Class." In its initial release, Geva provided an incorrect date.