Getting fiscal: municipalities beat each other 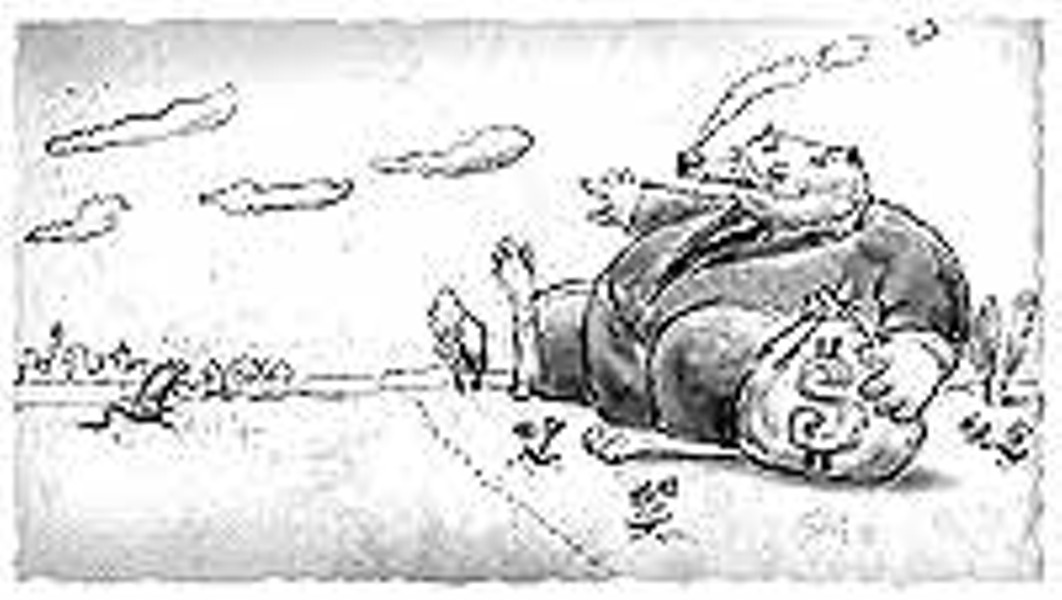 This being election season, real issues are as scarce as hen's dentures. Sound bites degrade to dum-dum bullets: "I'll create jobs," "I'll fight crime." Meanwhile, the manifest wounds lie open. Society has fallen on barbed wire; every small movement causes another cut. And the issue that cuts most deeply on the domestic front --- economic inequality --- stays within the fence, barely mentioned.

The abstract point has plenty of numbers behind it, too.

The local Metropolitan Forum brought this home in 1996 with a report on The Health of Monroe County's Suburbs: Stagnation in the Inner Ring. (Find it at www.rit.edu/~metforum/redbook.html.) The report covered not just the towns but also the city of Rochester. It summarized economic inequalities between the city, inner-ring suburbs like Irondequoit and Greece, and outer ring 'burbs like Pittsford and Mendon. And the report hasn't been superseded.

Tony Favro, an assistant to Rochester Mayor Bill Johnson who's studying metro problems and solutions, calls the report "the last authoritative study" on the subject. Favro adds that City Hall has plans to "update [the report] and go beyond it." But because this task isn't quick and easy, it will have to wait. "It really does take time and some digging" to make sense of the data, Favro says. "Things aren't reported in a way that would be easiest to use."

Now that reams of data from US Census 2000 are out, however, it's possible to make some selective comparisons of local communities.

When you put the older and newer data side-by-side, you find patterns that are changing for the worse, if anything.

Using 1995 data from the census and local sources, the Metropolitan Forum report started with a look at "assessed value per capita," determined by dividing the total value of taxable property and utilities in a municipality by the number of residents there. (Household wealth tends to vary directly with the value of homes and other properties --- but there are exceptions, as with working farmers or homeowners with low or fixed incomes.) The report said the city had an assessed value per capita of $25,623. For Greece, the figure was $38,694; Irondequoit, with similar demographics, was at $37,807. The southeastern suburbs stood in contrast to the rest of the county. Pittsford had $68,687 of value per capita, and Mendon topped the scale with $70,149 per capita.

Today, things look much the same --- only more so, in a manner of speaking.

According to figures assembled early this year by the Monroe County Legislature, the city of Rochester's taxable assessed valuation now totals $4,719,335,933. (City assessments are given at full value, 100 percent, as are the other assessments used here, except Pittsford's, which is slightly below full value.) Given the city's population of 219,773, that works out to $21,474 per capita.

For the town of Greece, using the same set of data, per capita valuation works out to $40,312. Irondequoit, at $37,453 per capita, is in pretty much the same boat. And again, the southeast stands out. The town and village of Pittsford (combined) come in at $74,297 per capita. For Mendon, including the village of Honeoye Falls, the figure is $69,808.

All municipalities within the county saw increases in their total assessed valuations between 1977 and 1995, as the Metropolitan Forum report showed. But there were substantial divergences. At the bottom was the city, with a growth rate over those years of 0.03 percent, essentially zero. Gates and East Rochester were in the teens, while Greece had rate just under 37 percent. Mendon and Perinton were practically tied at the top, both with over 130 percent.

You can't call the plays without reading the population scorecard, too.

Between 1990 and 2000, Monroe County's population increased by 3 percent --- small indeed. The city of Rochester's population, though, went down 4.6 percent (oddly, about the same drop as in the village of Pittsford). Greece and Irondequoit sort of canceled each other out: Greece went up 2.4 percent, and Irondequoit went down by the same percentage. But the town of Pittsford grew by more than 11 percent, while Mendon grew by more than 22 percent.

Looking over these figures, you see a few things. The rich got richer, in terms of the value of real property and its multiplier effect on a community's wealth. Pittsford and Mendon, for example, kept the same per capita valuations while significantly increasing their head counts, which means gobs more wealth within their borders. Greece, though, gained only a little in total community wealth, through a slight increase in population and an equally slight increase in per capita valuation. And Irondequoit, which lost some capitas, managed to stay level in total valuation.

Then there's poor Rochester. Continuing a longtime trend, the city's population declined significantly --- the drop of 4.6 percent translates into 10,583 fewer people. But the city lost proportionately more in total valuation: down by around 16 percent in just 10 years.

Rochester-area conversation often turns to inequities in local tax rates. And the figures show the common wisdom isn't far from the mark: City taxpayers do get a raw deal, comparatively.

Data from the state Office of Real Property Services show that local "overall property tax rates," which factor in different rates for homesteads versus non-homesteads, are all over the map. In fiscal 2001, for example, the town of Mendon's overall rate was a bit under $28 per thousand dollars of assessed value. In Irondequoit, the rate ranged between $33 to $35 per thousand. Pittsford came in at $26 to $32. The city of Rochester's rate was $37.11. (The total on your tax bill is, of course, the rate times your property's assessed value. Most city properties cost much less than comparable ones in the 'burbs, which means a lower tax bill in absolute terms --- but not in relation to property value.)

The latest figures from the Greater Rochester Association of Realtors, as reported by Gannett, show that through most of calendar 2001, the median price for a city home was $49,900. The median price of a suburban home during the same period was $112,500; in Pittsford, the figure was $219,500, while in Mendon it was $239,000. These figures are up-to-the-minute but not comprehensive, since they reflect only the information gathered by the association.

The national housing boom --- and a possible bust to follow, if investment dollars flow back to a healthier Wall Street --- position the price/tax figures on shaky ground. But the pattern of inequality persists through the ups and downs.

What about the money that flows back from the proverbial Taxman to the citizens, in the form of public services, capital investment, and so forth? Doesn't that iron out the inequalities?

Two broad trends are worth attention here --- and since they've been well documented in recent news coverage, they don't require detailed comment.

First, there's the current (and soon to be annualized) financial crisis in New York State's big urban school districts, including Rochester's; the Pataki administration and urban school advocates are now in court to see if the state school aid formula will be adjusted to help the ailing "Big Five" districts. Second, proposed cuts to the Monroe County budget, due to be voted on in early November, are weighted against services for the poor, the vast bulk of whom live in the city; the cuts will therefore mean fewer county tax dollars flowing into the city --- even if the county's sales-tax sharing formula is tweaked when it comes up for review next year.

It's not just dollar figures and percentages that tell the story, however. Look at where new residences are being built. There's plenty of obvious new-home construction in suburban areas, while in the city, though it too has plenty of vacant land, new construction is relatively rare. ("In 1996," say Rochester 2010, "the city ranked fifth, behind the towns of Webster, Greece, Perinton and Penfield, in the number of building permits issued for new single-family home construction.")

The town of Greece, for example, recently opened a fancy new town hall complex to replace smaller quarters. And the town of Webster recently opened a new recreation center with up-to-date attractions. Such buildings stand in contrast to similar facilities within the city limits. The city's recreation centers, for example, have drawn criticism for not being able to "compete" with suburban counterparts. Bottom line: The municipalities that have the cash --- in government receipts and in the pockets of residents --- can create new facilities and services; those without the cash make do with less.

Not that attention to the problem is wholly lacking.

Monroe County Legislator Jay Ricci, an Irondequoit Democrat, has been focusing on the way sales-tax revenue and other local funds have been shared. "It's the law of diminishing returns as it's set up now," he says. Because the sales-tax formula is based on a town's assessed valuation as well as its population, he says, the outer ring gets more and the inner ring gets proportionately less. "It's a downward spiral," he says.

There is a rationale behind this disparity, says Ricci, adding he doesn't buy it. The "conventional argument," he says, is that high-income suburbanites "spend more of their discretionary income on things covered by the sales tax." So in conventional terms, the town whose citizens put a lot into the kitty deserves a bigger share from the kitty. (It's something like George W. Bush's belief that "it's your money" and that government's duty is merely to "give it back.")

Any local initiatives on this front, though, will have to contend with what higher levels of government do.

Ricci predicts that right after the November 5 election, we'll see a "big hole" open up in the state budget --- a hole that will precipitously "roll downhill."

Moreover, he says, there's a bigger hole somewhere in the pipeline between New Yorkers and the feds. "We get back 50 cents of every dollar we send to Washington," he says. Indeed, this has been a durable feature of state-federal relations for many years, as tracked by former US Senator Daniel P. Moynihan.

Last December, the Business Council of New York State determined that in fiscal 2000, "New York State taxpayers sent the federal government some $47 billion more in taxes than the state received in federal spending." This was based on a total outflow to Washington of $166 billion, and an inflow to the state of $119 billion. Moreover, the Council said, the 2000 deficit was "the largest ever." It's the same old tune: a formula that's almost guaranteed to place New York's poor or stagnating communities at a disadvantage, given the dominant priorities and public spending patterns.

What way forward from here?

Metropolitan Forum member John Klofas suggests the approach taken in Minneapolis. There, he says, a certain portion of new tax revenues goes into a fund that supports the disadvantaged parts of the metro area.

Myron Orfield, a Minnesota state senator, law professor, and writer on metro issues, described this system in the Sacramento Bee earlier this year. He told how, way back in 1971, Minnesota passed a "Fiscal Disparities" act to address the Rust Belt decline afflicting the state's cities. The act, said Orfield, allowed the sharing of commercial property taxes to benefit the cities, not only to promote development more evenly, but also to reduce destructive competition between urban areas.

Orfield credited the act with helping Minneapolis and St. Paul really behave as Twin Cities, working together on the revenue side and --- not incidentally --- reducing sprawl in the process.