With the onset of summer, the roads and routes of New York State aren't as treacherous, and the thought of making the trip to some of our more outer-regional art houses is bearable. Though CITY will provide our normal coverage of Rochester's art institutions throughout the summer, here we take a closer look at some regional spots housing some pretty remarkable art jewels and events, from big household-name artists to regional and international contemporary masters, as well as promising student work from throughout the region.

The closest day-trip option is less than an hour's drive to our western neighbor, Buffalo. Queen City's big institution is the Albright-Knox Art Gallery (1285 Elmwood Avenue, 716-882-8700, albrightknox.org), which houses an extensive contemporary and modern art collection. An enduring concern of many artists, past and present, is war. Through October 5, "Anselm Kiefer: Beyond Landscape" provides a look at how the artist, born at the close of the Second World War, represented the ravaged German terrain and psyche, whereas many of the artist's contemporaries chose to look away. 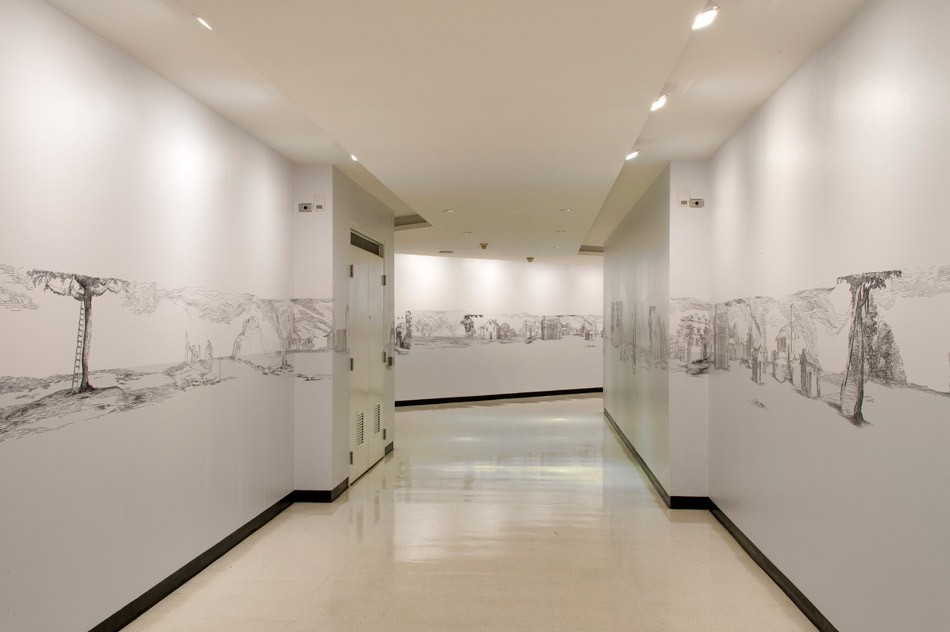 Other summer exhibits at Albright-Knox include "Albrecht Dürer: Highlights from the Collection" (through July 6), "Lucas Samaras: Reflections" (June 21 through November 16), and "Tour," (through May 18), an audio-visual installation by Taiwanese-Canadian artist Millie Chen. Featuring "healed" genocide sites in Rwanda, Cambodia, Poland, and Wounded Knee (USA), Chen's installation explores the persistence of memory despite scars being absorbed by the earth and time and atrocities perpetrated in the present. Also check out Chen's other installation, "The Miseries and Vengeance Wallpapers" (through April 2015), after French artist Jacques Callot's etchings that documented the Thirty Years' War.

This summer, catch Colleen Ludwig's interactive exhibit "Shiver" (through June 22), a three-walled sensory environment which employs 35 infrared sensors and 71 water valves, which drip rivulets of water down the walls in response to the presence and position of viewers. Also check out "Craft in Black and White" (through July 27), in which the restricted color palette allows the other elements of profile, texture, and mass to take center stage; and photographer Janelle Lynch's "Presence" (June 13 through November 2), which captures nature and trees as metaphorical portraits.

Don't skip over Hallwalls Contemporary Art Center (341 Delaware Avenue, 716-854-1694, hallwalls.org), which presents multi-media exhibitions, as well as film screenings and musical and literary performances. Through June 27, view Chicago-based artist and filmmaker Deborah Stratman's "Swallows: Subsurface Voids," which will transform the gallery into a temporary museum to the terrifying phenomenon of sinkholes. After that, catch the Hallwalls Members' Show (July 11 through August 29), and keep your eye on the calendar for special one-off programming bits. 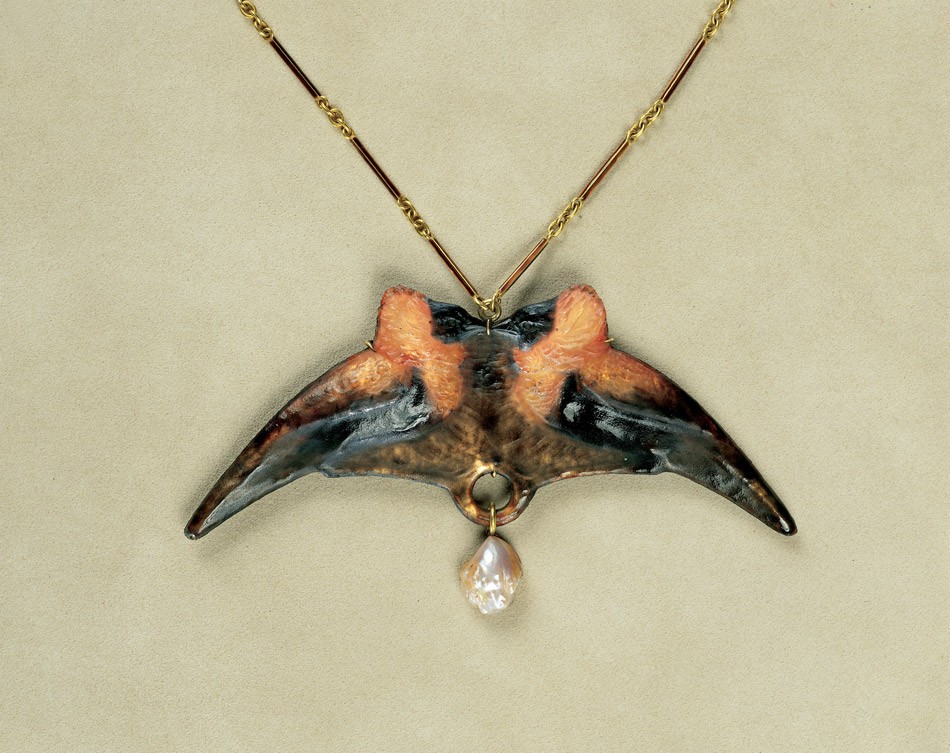 Heading south of the Finger Lakes and a bit east of Rochester, we encounter Corning. The Corning Museum of Glass (One Museum Way, 800-732-6845, cmog.org) cares for and displays art and historical glass covering more than 3,500 years of human history, from a glass portrait of an ancient Egyptian pharaoh to contemporary sculpture. The hands-on exhibits in the Innovation Center teach about the scientific and technological innovations in glass which have shaped our world, including optics, vessels, and windows. Glassmaking demos take place during the course of a day, and visitors can even try your hand at glassmaking by signing up for a one-day, weekend, or multiple-week course.

The Corning Museum of Glass also offers exhibits year-round, and has recently spotlighted specific sculptors, adornments, objects of high art and design from different decades, and historic telescopes. Through January 4, 2015, the museum will display concurrent exhibits "René Lalique: Enchanted by Glass" and "Designing for a New Century: Works on Paper by Lalique and his Contemporaries," bringing together glass objects, jewelry, production molds, and design drawings by the renowned French master of Art Nouveau and Art Deco designs. 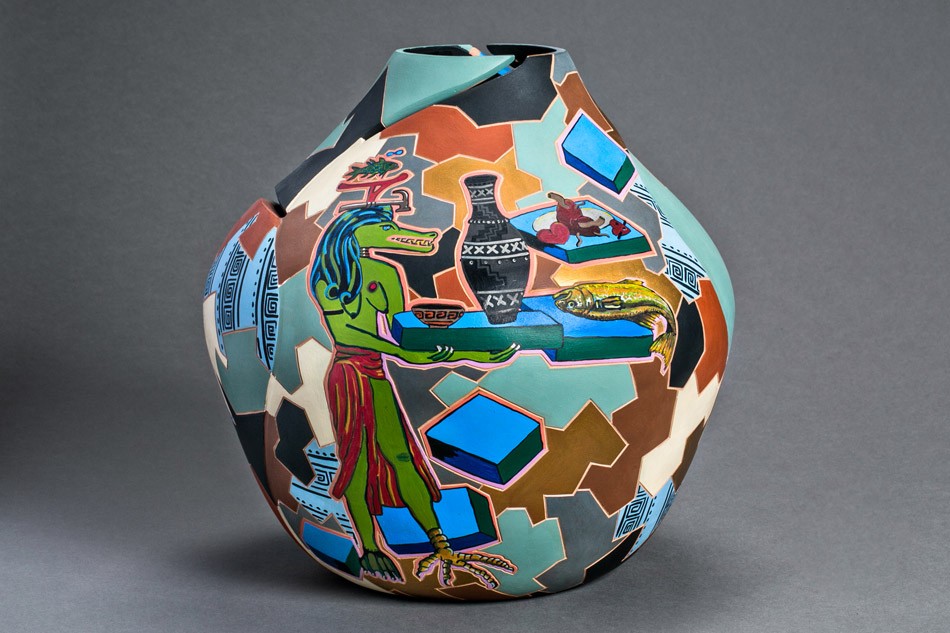 Also located in Corning, Rockwell Museum of Western Art (111 Cedar Street, 607-937-5386, rockwellmuseum.org), specializes in American Western and Native American art. In addition to an extensive collection, the museum hosts lectures and discussions, performances, children's activities, and rotating exhibits. Through April 1, 2016, check out "On Fire: The Nancy and Alan Cameros Collection of Southwestern Pottery," which features more than 100 pieces, including work from the century-old rebirth of Native pottery in the Southwest, as well as pieces by contemporary artists who are connected to a 2,000-year-old tradition.

Through March 8, 2015, The Rockwell will also feature "Untouched by Chaos: Karl Bodmer and the American Wilderness," works by a young Swiss artist who accompanied a German nobleman-naturalist up the Missouri River in 1833-34. Bodmer produced some of the earliest images of the trans-Mississippi Western landscape, people, flora, and fauna, and this exhibition will feature the most important hand-colored engravings based on his original watercolors.

Through September 7 of this year, catch "Abraham Anghik Ruben: The World of Man, Animals and Spirits," an exhibit of recent sculptures contrasting the ancient lives of Norse adventurers and Inuit (Inuvialuit) whale hunters; and "Illustration and Imagination: W.H.D. Koerner's Western Paintings," featuring about 20 Koerner's original paintings and drawings, which were the basis for his 1920's and 30's Saturday Evening Ragtime illustrations. Also, through January 1, 2015, check out "Lock, Stock & Barrel: Historic Firearms from the Robert F. Rockwell III Collection."

About an hour and a half east of Rochester, Syracuse is home to the Everson Museum of Art (401 Harrison Street, 315-474-6064, everson.org). The Everson is dedicated to collecting American paintings, sculpture, drawings, graphics, and one of the largest holdings of American ceramics in the nation. In addition to films, talks, classes, and other educational programs and special events held throughout the year, Everson hosts exhibitions ranging in subject from ancient artifacts to contemporary works in new media.

Through December 31, check out "Enduring Gift: Chinese Ceramics from the Cloud Wampler Collection," which includes work that spans nearly 2,000 years, from the Han Dynasty in 200 BCE to the Ching Dynasty, which ended in 1912. Through July 27, Everson presents "Mary Giehl: Rice is Life," a sculptural installation focusing on world hunger issues. "Sarah McCoubrey: Works on Paper" will be on view through August 24, featuring delicately drawn mixed media works which explore a fantastical, living landscape reacting to humanity's poor stewardship of nature.

While in Syracuse, check out ArtRage (505 Hawley Avenue, 315-218-5711, artragegallery.org), a gallery which exhibits "progressive art that inspires resistance and promotes social awareness, supports social justice, challenges preconceptions and encourages cultural change," per its mission statement. Through July 19, check out "Proof Through the Night," a retrospective of traditional silver-based photography and lithographs by Paul Pearce. The artist is a disabled Vietnam veteran turned anti-war activist who in a provided statement says he feels a "gnawing need to expose a system that turns innocent children into monsters."

Located about two hours east of Rochester, the small city of Utica features the Munson Williams Proctor Art Institute (310 Genesee Street, 315-797-0000, mwpai.org). The museum collection features about 25,000 artworks, the core of which is 19th-century through contemporary fine arts and sculpture, and 19th-century American decorative arts objects. Through September 28, "Butterflies, Geishas, and Dragons: The Arts and Influence of Japan" will showcase the rich influence of Japanese art and culture on European and American decorative and fine arts.

"Life During Wartime" (through Aug 3) features artwork created during the 17th through the 20th centuries which depict and explore patriotism, cruelties visited upon civilians, brutality of combat, and protests. June 15 through September 14, check out "The Golden Age of European Painting," which features more than 70 major paintings by such European masters as Rembrandt, Rubens, Tiepolo, Gainsborough, Hogarth, and others.

If you're in the mood for a more ambitious road trip, pack some snacks and take the nearly three hour jaunt east to Cooperstown, where you'll be rewarded with the Fenimore Art Museum (5798 New York Route 80, 607-547-1400, fenimoreartmuseum.org). Housed in a 1930's neo-Georgian mansion, the museum's collection includes American landscape, history, and genre paintings; American folk art, photography, and American Indian art.

A host of exhibitions on view through the summer and fall include "The Adirondack World of Arthur Fitzwilliam Tait" (through September 1), L. F. Tantillo's visions of the early history of New York and the Hudson River (through December 31), and "Winslow Homer: The Nature and Rhythm of Life, from the Arkell Museum at Canajoharie" (June 6 through August 24), among others.