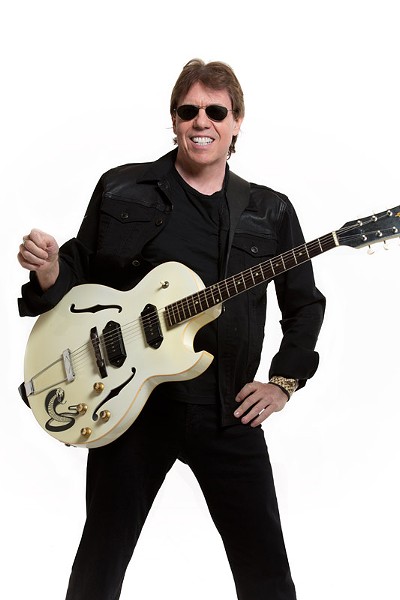 You wanna survive in showbiz? Wanna last in this rock 'n' roll racket? Just listen to blues rocker George Thorogood. Eat your greens. Get some Z's.

"I have never underestimated the value of a good night's sleep," Thorogood says. "I asked Chuck Berry once, I said, 'Chuck, if there's one thing that's the bottom line to success on any level, what is it?' And he said, 'George, you gotta eat right.' So I try to eat right. I try to get as much rest as I can. I get myself in a horizontal position as often as possible."

Naps and meals aside, if it weren't for George Thorogood, there's a good chance you may never have heard about Bo Diddley or John Lee Hooker or Hound Dog Taylor. For the past 40-plus years, Thorogood has not only reverently shed light on these legendary artists and more, but has made their tunes his own. We all like to act a little high-tone, like a bunch of vintage aficionados, but chances are, if you grew up on rock in the 70's on upwards to today, the first time you heard "Madison Blues" was out of Thorogood and not Elmore James.

At 64, the man still gets jazzed when talking about the blues and its icons.

"It was the foundation of every rock band I ever — I don't want to say idolized — liked," he says. "Like Bo Diddley, the Rolling Stones, The Animals, The Yardbirds, Led Zeppelin, Jimi Hendrix, J. Geils — I'll stop right there — they all started with the blues. You have to learn that blues foundation in order to be a qualified rock act. The three artists that really captured my imagination and put it in my head were John Hammond, Peter Wolf and the J. Geils Band, and Hound Dog Taylor and the Houserockers. I looked at those three and said, 'They're the ones that are doing it.' I looked at them and said, 'That's it; that's what I wanna do.'"

Thorogood and his band, The Delaware Destroyers, are sho-nuff qualified — and bonified, jack. The band has released 16 studio albums (two certified Platinum, six certified Gold) and have sold 15 million worldwide.

And then there's the live show. Thorogood is a relentless entertainer with an onstage persona that calls to mind Little Richard crossed with Godzilla. His big, bad guitar fills the room with its sheer slide and a throaty growl akin to his voice.

"Our show is pretty versatile," says Thorogood. "We do a lot of stuff. When we do 'Born To Be Bad,' that's like Steppenwolf. When we do 'Who Do You Love?' that's John Hammond and Bo Diddley. When we do 'Night Time,' that's J. Geils all the way. When we do 'I Drink Alone,' that's me. 'One Bourbon, One Scotch, and One Beer,' that's John Lee Hooker. 'Cocaine Blues' is Johnny Cash mixed in with a little Gramm Parsons. And our show has all that going for us. We're a smorgasbord of Americana and American rock 'n' roll from 1948 to 1968."

No one else is doing it, either. No one new anyway, according to Thorogood. He is not impressed with today's crop. There's nobody new that excites him.

"No, there isn't," he says. "There's B.B. King, there's Buddy Guy, John Hammond, Charlie Musselwhite: anything outside of that is pretty much an interpretation of the blues. You've got to understand, my first gig was with Sonny Terry and Brownie McGhee. My second was with Robert Lockwood Jr., then Hound Dog Taylor, Willie Dixon, Muddy Waters, John Lee Hooker, Howlin' Wolf. I came in at the eleventh hour of the real blue thing. After that I said, 'That's it, man.' The rest is an interpretation of the blues; it's not the real blues."

George Thorogood shows no sign of slowing down. There're still plenty of houses to be rocked.

"Some people want to rest on their laurels," he says. "And I say, 'What if you have no laurels?' I have to keep tweaking my act and make it better than it ever was. That's how you stay in business."

Tweaking, eating right, plenty of sleep, got it.

When it's all over, 100 years from now, what'll they say? Thorogood sums up his legacy: "Now there's a guy who got the job done."