An accused would-be art thief has a day in court 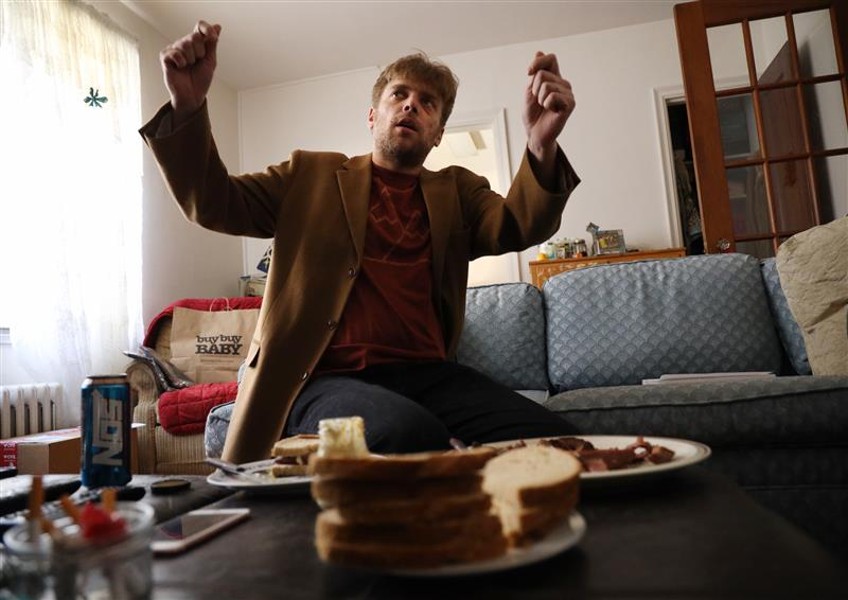 PHOTO BY MAX SCHULTE George Haag describes removing a portrait of Andy Warhol by photographer Robert Mapplethorpe from the wall at the Memorial Art Gallery.
George Haag had butterflies in his stomach, more like a performer in the wings than a defendant in a criminal case, as he waited to be called into Courtroom 401 at the Hall of Justice in downtown Rochester recently.

He had yet to meet his public defender in the flesh and had dressed up for the occasion, wearing a brown sport coat over a red knitted vest and a novelty necktie emblazoned with cartoon breasts that he bought at the adult store Show World in Henrietta.

When the public defender arrived, he advised Haag to remove the necktie, saying it wasn’t appropriate for his appearance before Rochester City Court Judge Nicole Morris. The matter at hand was no laughing matter, but Haag had prepared for his bit and wasn’t about to let it go.

Haag, 37, an aspiring comedian with dreams of reopening the old Monroe Theatre as a comedy club, was charged with attempted grand larceny in the second degree for allegedly trying to steal an item from the Andy Warhol exhibit at the Memorial Art Gallery back in January. The charge is a felony that carries a maximum penalty of seven years in prison.

The item in question was a portrait of Warhol shot by photographer Robert Mapplethorpe that is thought to be valued at $60,000.

When Morris called his name, Haag walked into the courtroom, pulled the necktie out from under his vest and apologized for being overdressed. The judge, who either never noticed the imprint on his tie or was indifferent to it, told Haag he looked fine and that they best just get the show on the road.

The show was to determine whether Haag would accept a plea deal from Monroe County prosecutors to move his case to mental health court, a branch of the justice system that provides non-violent offenders living with mental illness with treatment as an alternative to trial and potential incarceration.

Everyone involved, it seemed, wanted Haag to take the deal — even the aggrieved Memorial Art Gallery.

“MAG has no interest in seeing Mr. Haag go to jail for this offense,” the museum’s director, Jonathan Binstock, said after the proceeding. “We do hope that he avails himself of the diversion from the criminal justice system to mental health court that has been offered.”

Haag would likely qualify for mental health court. In an interview in his Brighton apartment a couple weeks before his court appearance, he said he has been prescribed medication for a diagnosed mental illness. At the same time, he said that he disputed his diagnosis and stopped taking medication more than a year ago.

He told his lawyer that he refused to go to mental health court, reasoning that he couldn’t be trusted to make the required routine appearances to report on his progress.

Besides, Haag insisted, he never tried to steal the portrait. He said he just wanted to pick it up and that, when he did, he was inspired to move it.

“It’s funny, I’ll be honest,” he said, “I did think about stealing it, but I decided not to, which is relevant because it’s an intent issue.

But why did he pick it up of the wall?

“To pick it up off the wall,” he said. “No, honestly, just to feel what it felt like. Like, I’ve never done that before. Who doesn’t want to pick up a piece of art off a wall of an art museum?”

Did he know he wasn’t supposed to do that?

In his apartment that day, Haag spoke at a rapid clip, like a fast-talking voiceover artist reading the legal disclaimer in a radio ad. He snacked on pastrami he brought home from the meat market down the street, where he does odd jobs a few hours a week. The owner there said he wanted to help Haag make ends meet.

While in Los Angeles, he said, he tried performing stand-up comedy and felt he was on to something. He put audiences in stitches, he said, just like he recalled doing to the deputies at the Monroe County Jail when he was arrested, and in court during his arraignment in February.

“Why don’t ants get the COVID-19?” was how he said he set up one of his best jokes for the officers. The punchline: “They got little antibodies.”

“I’m joking around with these guys and all the cops behind me are sniggering because I’m having fun with this,” Haag recalled of his arraignment.

After his foray into stand-up on the West Coast, Haag returned to New York and taught for a while at schools in Rochester and in the North Country, but he said he was unable to hold on to those jobs.

In recent years, Haag said, he’s been dividing his time between the meat market, doing stand-up at open mics, working on getting his comedy club venture off the ground, and attending sessions at Strong Ties Community Support Clinic, an outpatient clinic of the University of Rochester Medical Center for adults with severe and persistent mental illness.

When Haag walked into the Memorial Art Gallery on Jan. 31, the day of the alleged attempted theft, he wasn’t a stranger to the place.

A few years earlier, Haag was integral to a celebrated film installation at the museum by the artist Javier Téllez that focused on cinema and mental illness. Haag and other people living with mental illness in the Rochester area collaborated with Téllez through a series of workshops, helping him write the script and starring in the movie.

When the instillation opened, the museum threw a party for the participants that Haag attended. The film, “Nosferatu (The Undead),” has since been screened all over the world.

Haag said he never paid to enter the museum the day he took the Mapplethorpe portrait of Warhol off the wall.

“I had this incredible artistic moment, where I have no idea what I’m going to do,” Haag said. “It was great. I’m sitting here with Warhol in my hands. So I walk across the room.”

He estimated that he was about 100 feet away from the nearest exit when he entered a part of the exhibit fashioned like a living room that played Warhol television appearances.

“I see this Andy Warhol TV room and I’m thinking, that is so perfect,” he said. “Just then, a docent walks by me and I held the picture up to him and said, ‘Hey look, a Mapplethorpe!’ . . . So I put it down on the ground in the frame leaned up against the Andy Warhol TV room.”

He said he then walked to the main entrance of the museum, told another official that he thought the Mapplethorpe portrait looked better on the floor, and walked out.

The Memorial Art Gallery released a statement on Feb. 10 announcing that a person had been arrested and charged in connection with an attempt to steal a work of art. The statement suggested that the would-be thief only got a few steps before he encountered a museum security ambassador, who secured the art and alerted police.

Haag told police in a statement that he “just wanted to make people laugh” and that he thought “Warhol would look better somewhere else.”

In court, after apologizing for being overdressed, Haag complained of being hot and took off his sport coat and vest to reveal a hand-written advertisement for his comedy club idea on a piece of paper taped to his back.

The judge told Haag to put his jacket back on. He complied, but not before he tugged his necktie free and tossed it into the air. After that, the judge suggested she would shut down the show until Haag could get his act together.

Then, the public defender interjected.

“We won’t be able to resolve this matter today,” he said, explaining that Haag didn’t want to go to mental health court and that he was prepared for his case to go before a grand jury and, from there, possibly to trial.

The judge agreed and adjourned the matter.

Haag picked up his tie off the courtroom floor, gathered a few stray items he had left in the gallery, and exited saying, “That’s a show.”