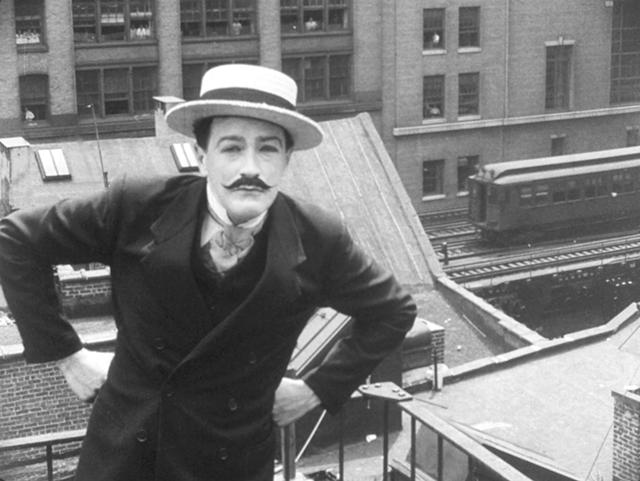 The images are black and white, the movements of the actors are herky-jerky, which is what we’re used to seeing in silent films. The acting is hammy —Edgar Barrier twists the ends of his handlebar mustache — and the antics are slapstick, with Joseph Cotton deftly scampering across an endless landscape of New York City rooftops, wrestling with uncooperative ladders.

But there is mystery to this antic madness. The film, “Too Much Johnson,” is not from the 1920s. It was shot in 1938, produced and directed by Orson Welles. His other significant project that year was the infamous radio production of H.G. Wells’ “The War of the Worlds.”

And three years later, Welles released what many film authorities consider to be the greatest movie of all time, “Citizen Kane.”

Why did this filmmaking legend in the making create a seemingly insignificant, retrograde spoof that he continued to work on for decades, even as he was creating masterpieces such as “The Magnificent Ambersons,” “Touch of Evil,” “Chimes at Midnight” and an acclaimed film interpretation of Shakespeare’s “Othello”?

More “Too Much Johnson” mystery: How was the film lost in 1970? Did the highly combustible nitrate print go up in flames, as Welles himself said? And if so, how was it rediscovered and restored with the help of the George Eastman Museum, where it is now conserved in the museum’s nitrate vault?

“Too Much Johnson” is more than a curiosity, says Caroline Yeager, associate curator of the museum’s Moving Image Department.

It is “a lost piece of the puzzle,” she says.

The two largest pieces of the Welles puzzle are live theater and motion pictures. Welles never abandoned one for the other.

“ ‘Too Much Johnson," is a bridge between those two worlds,” Yeager says.

It is actually more than a bridge. It is a leap to a hybrid form. The film serves as three separate introductions that segue into live performances of an 1894 comedy written by William Gillette, perhaps best known for portraying Sherlock Holmes in plays and in a 1916 silent film that was lost until its rediscovery in 2014. (Many silent films seem to have been misplaced over the years, including two previous versions of “Too Much Johnson.”)

“I think it’s important,” Yeager says. “It is that bridge; it shows Welles as a director of both cinema and stage. He had cinema running in his blood, he understood it and he could use it to his maximum.”

Welles’ vision of “Too Much Johnson,” Yeager says, “would have been the first time for most people to see a combined audio-visual performance.” Back and forth and back again, from silent black-and-white film to live onstage with color and sound.

“You see Joseph Cotton running across the rooftops in New York, chased by Edgar Barrier, and then, plunk, they land at the harbor, they’re on a ship.," she says. "And the next thing you know, boom, you’re on a stage set and he drops into the film, or drops onto the stage, and the chase continues from there.”

It's a multimedia experience that was, Yeager says, “Way, way, way ahead of its time.”

It was a step back in time as well — back to hybrid vaudeville presentations of short film and live performance that had once been popular. “Welles, of course, grew up with silent films,” Yeager says. “He understood the structure and he appreciated silent film slapstick comedy, which is why he was directing it in the way he was.”

Yet the construction of the film portion, as a piece of a whole no longer available to the audience, is a storytelling problem, as is the fact that, despite the years that Welles spent working on it, he never completed editing “Too Much Johnson.” And the title cards familiar to most silent films, a sentence informing the audience as to what is being said  were never completed.

So, “It needs a little helping hand,” Yeager says.

While “Too Much Johnson” was being shown around the country over the last couple of years, the George Eastman Museum sent along employees as narrators, filling in the holes. For the version recently posted on the George Eastman Museum website, Yeager and Anthony L’Abbate, preservation manager of the Moving Image Department, offer commentary on the making of the film, its loss and recovery, the photochemical restoration of the 10 reels, and its conversion to digital.

“Too Much Johnson,” minus the film sequences, had a two-week run at a small theater in Connecticut in 1938. There were problems, such as finding a theater with a stage that also had nitrate-film projection capabilities. And Welles was suddenly in demand. He had so many projects going that he’d take unfinished work on the road with him. So it was while in Italy, on yet another film project, that Welles and “Too Much Johnson” apparently parted ways. 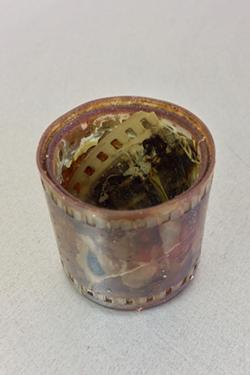 The nitrate print was supposedly lost in a fire. Maybe. While there was a small fire that was put out with a hose, “You can’t put a nitrate fire out with a garden hose,” Yeager says. “And if it was nitrates that burned, it would have consumed the entire house. It did not.”

Instead, she says, Welles simply lost track of the material. Or he said he did, perhaps because he grew tired of people asking him about “Too Much Johnson.” Welles once said that he rediscovered it while at his home in Spain, and Yeager adds that his working print of “Too Much Johnson” sat for years in a warehouse in Pordenone, Italy. It was abandoned property, before it was re-rediscovered in 2008 by Italian film enthusiasts who had a connection to former George Eastman Museum Senior Curator Paolo Cherchi Usai. Nine of the reels went to a Pennsylvania laboratory for preservation, while a tenth damaged reel was sent to Amsterdam, before all were reunited at the George Eastman Museum in 2013.

Original music had been written for “Too Much Johnson” by Paul Bowles, an acclaimed novelist who had many friends among Beat writers such as Allen Ginsberg and William Burroughs. But for the new version, music in the style of Bowles was composed by Rochester pianist Philip C. Carli, whose specialties include accompanying the showings of silent films.

Working with the Italian film preservationists Cinemazero and the National Film Preservation Foundation, the George Eastman Museum made no attempt to finish Welles’ editing of the film. The surviving 65 minutes of “Too Much Johnson” features multiple takes of the same scenes. Those include locations at a New York quarry, with temporary palm trees, standing in for the harbor in Havana, Cuba. There are some references from Welles about harbor scenes created with tiny boats that are not among the existing film, leading Yeager to speculate. “It’s conceivable that there is missing footage,” she says.

Still, Yeager estimates that the preserved “Too Much Johnson” is 95 percent of what Welles shot. And what is there is worth a look.

Many of the film’s images of New York City is a city that no longer exists. But its architecture and textures are what inspired many of the scenes. “It’s remarkable what he saw,” Yeager says. “And his eye said, ‘This is great, I’ll send them up and down the fire escape…’ ” 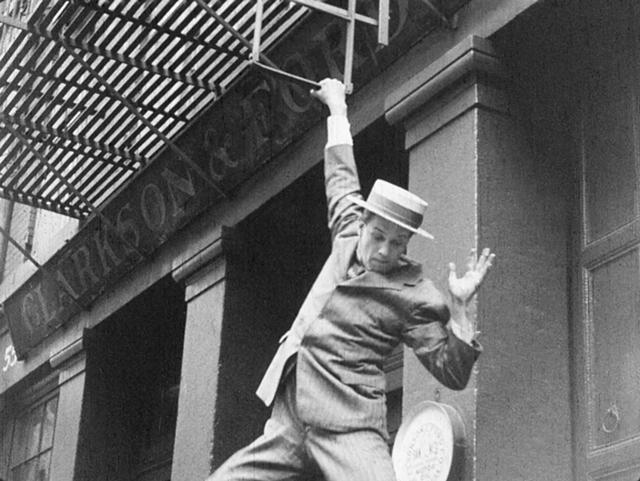 And so actors chase each other up fire escapes shaped like DNA molecules. Welles uses brick textures on the sides of old buildings and clotheslines strung across alleys. There's unexpected use of light and camera angles, and long shots of distant characters — all Welles signatures that would appear three years later in “Citizen Kane.”

“ ‘Citizen Kane' is, it’s certainly not a slapstick comedy,” Yeager says. “But when you watch ‘Too Much Johnson,’ and this is the thing that struck me the most, you can see his complete understanding of cinema. There are shots and angles in there, he knows what he’s doing.

"He may not have had the full vocabulary yet, and he would say that when he first got to Hollywood and was shooting ‘Citizen Kane,’ he was somewhat terrified. But he threw himself into it and he talked to directors. He was a friend of John Ford and John Huston, William Wellman, these great cinema directors, and he learned from them.

“His signature is there in ‘Citizen Kane,’ and it just grew.”

And then Yeager brings the story home, about how “Too Much Johnson” was “way, way, way ahead of its time.” The digital projections of the 2012 Broadway hit “The Curious Case of the Dog in the Night-Time,” with stage, set and lighting design that allows for a mix of media: projection and live theater. That’s part of where Welles was going with “Too Much Johnson,” with the two separate elements — cinema and stage — finally working together in 2015 at the Film Forum in New York City.

“I’d love to see somebody do the play,” Yeager says. “And we could assist them by giving them, working with them, with the digital elements. They could be projected, so it would be kind of fun to see what a theater company could do with it, because you would want to see actors that would look like Joseph Cotton and Arlene Francis and Edgar Barrier and all the rest. And see it the way Welles intended.”