December 21, 2020
The Geneseo-based jazz troubadour Miche Fambro, who Rolling Stone magazine once called a "quiet storm," died Dec. 19 after recently announcing that the liver cancer he was battling was terminal. Fambro was 64. 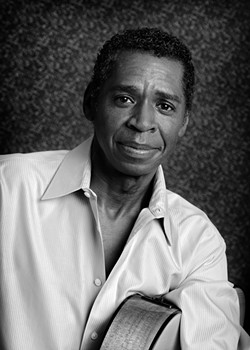 To call Fambro "cool" would have been an understatement. He possessed an excess of elegance and charm.  With a swagger that recalled Nat King Cole and Billy Eckstine, Fambro had a honeyed voice and the charisma of a classic talk show host. His smile bordered on a laugh.

Making the scene in the early ’80s, Miche & The Anglos created a danceable blend of pop with new-wave muscle. The band didn’t just swing, it glided.

Miche & The Anglos was one of the first Rochester bands I ever saw. The show was at the old Jazzberry’s on Monroe Avenue, and I still remember how the group’s energy and use of dynamics affected me that night.  In addition to being an accomplished singer, Fambro could play his nylon-string guitar in a flurry that made it look easy.

Though he circled the globe continuously, he belonged to all of us in and around Rochester.

Fambro loved Christmas music, and had posted a series of holiday songs on his Facebook page last week. He leaves behind his wife Wendy and their two daughters, Michael and Naomi.

Thank you for the music, Miche. Rest in peace.

Donations can be made to Fambro’s family via a fundraiser on Facebook.