January 21, 2020
Genesee brewmaster Dean Jones, one of the most decorated chocolate beer makers in the country, walked into Young Lion Brewing Company in Canandaigua the other day with a 50-pound sack of Ghirardelli cocoa powder and a plan.

The plan was for the two breweries — a Rochester icon in Genesee and a relative newcomer in Young Lion — to collaborate for the first time on a limited-release chocolate stout.

“I said, ‘I’ll bring the chocolate, you guys make a dry stout,’” Jones said. “Don’t even send me the recipe for the stout, that’s not what I’m going to do. If Phil’s got an idea, I’m going to roll with it.” 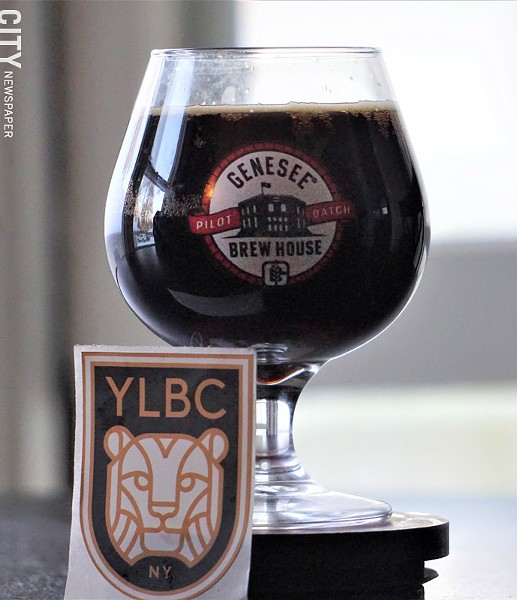 Phil is Young Lion head brewer Phil Platz, and his idea was to work with Jones, whose chocolate scotch ale took gold a couple of years ago in the chocolate beer category at the prestigious World Beer Cup.

Set for release around Valentine’s Day, their creation is based on one of Platz’s favorite beers, the Young Lion Stout. That beer was, fittingly, inspired by Lion Stout, a foreign export brewed by the Sri Lankan Lion Brewery.

Platz said he cut the alcohol from 7.5 to 6 percent for the chocolate version of the stout, but otherwise kept the recipe the same.

“It’s got hints of chocolate anyway from cacao nibs, so this collaboration just made sense, to just kick that chocolate up another step,” Platz said.

Young Lion opened in 2017 on Canandaigua Lake and is now one of the largest breweries in the region, with a 30-barrel brewhouse and capacity for up to 90-barrel batches.

The collaboration is expected to yield 60 barrels, or 14,880 pints, and will be distributed across the Finger Lakes and Western New York, according to the breweries.

For Young Lion owner Jen Newman, the venture is a partnership long overdue.
“We’ve been talking about it for over a year, I’m a huge Genesee fan, period,” Newman said. “When I got to meet Dean at the brewery and out in the community, I knew we had to get this on the calendar.”