April 16, 2020
Some good news for Rochester’s beer nerds: the Genesee Brewery is bringing back the Mosaic Dry-Hopped Cream Ale. Well, sort of.

A new Dry-Hopped Cream Ale to launch this fall won’t be hopped exclusively with Mosaic, but rather a selection of “modern hops” handpicked by head brewmaster Steve Kaplan. It will serve as the fall and winter edition of a new seasonal cream ale line-up, which as of right now consists of two beers split across six-month seasons. 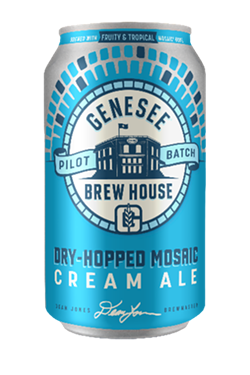 The second is the Lemon Strawberry Cream Ale, launched last year as a new year-round version of Genesee’s old standby. It will serve as the cream ale for the spring and summer months.

“Honestly, the findings we had last year was that (Lemon Strawberry) was really strong out of the gate, but once the weather changed, people wanted something else,” said Janine Schoos, brand director for Genesee.

Genesee already operates a seasonal line of beers, including Bock, Schwarzbier, Oktoberfest, and the much loved Ruby Red Kolsch. The new seasonal cream ales will have no effect on the other seasonal offerings, including Kolsch.

Schoos said Kaplan and the company are shooting for a modest 4.5-percent alcohol for the Dry-Hopped version, below the 5.2 percent of Cream Ale and Lemon Strawberry. It’s a move that plays into a rapidly growing segment of “session pale ales,” or low-calorie, low-alcohol hoppy beers like Founders All Day IPA.

That beer clocks in at 4.7 percent and is one of the best selling brands in the Rochester market.

“(Industry) data shows us consumers gravitate towards hoppy during fall and winter,” Schoos said. “There’s a big spike in hoppy beers during those times, so now we’re able to follow that trend.”

Mosaic Dry-Hopped Cream Ale was one of three cream ales, alongside Orange Honey and Imperial, launched in a mixed 12-pack from the Genesee Pilot Brewery in 2018. While wildly popular, the beer hasn’t seen distribution since, although it does occasionally pop up on the brewery’s draft list.

The original beer was brewed by Pilot Brewery Brewmaster Dean Jones. Kaplan is in charge of the new seasonal version. Schoos said it was partially a test of seeing the capabilities to brew more complex beers, like a dry-hopped ale, at the new, modernized, nearly $50 million brewery.

Schoos did not place an exact date on the launch of the Dry-Hopped Cream Ale, but said to expect it in fall as the weather begins to cool down.

In the meantime, Lemon Strawberry is currently on store shelves.