GEEK EVENTS: Nerd up your summer

May these geek events be with you

Like many nerds, I have the tendency to remain indoors, permanently huddled in front of whichever glowing box happens to be displaying my currently desired form of entertainment. But now it's summer: the few months every year when Rochester is guaranteed at least some beautiful weather. So it seems a shame to waste it. It's important to occasionally disengage from The Grid, stumble blinkingly into the sunlight, and actually interact with other human beings. (I know, I don't like it any more than you do — but it's good for us.)

Yes, many of these events do take place inside, but by attending, you'll be alongside your fellow nerds and that totally counts for something (besides, our kind have a tendency to burn easily, so you can never be too careful). Most of the events are close by and would make great day trips, but one does require a trip up north to Niagara Falls (but on the New York side, so there's no need to worry about incurring the wrath of any Wildlings by venturing beyond The Wall). There's bound to be something here to satisfy those from every shade of the nerd rainbow, and they also provide plenty of opportunities to dress up in sweet costumes, and that's just good wholesome fun.

So get out there and enjoy yourself while the weather's fair, because this is Rochester, and winter is coming. Eventually. 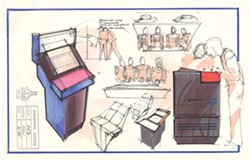 Produced by The Strong's International Center for the History of Electronic Games (National Museum of Play, 1 Manhattan Square Drive, museumofplay.org), the "Atari by Design: From Concept to Creation" special exhibit focuses on the creation process of several vintage arcade games. On display will be the original game cabinets, concept designs, drawings, sketches, and advertising materials for classic arcade games, including "Gauntlet," "Gran Trak 10," "Red Baron," "Gotcha," and "Street Fighter." And once you've made your way through the exhibit, you can stop in and enjoy "eGameRevolution," the museum's permanent arcade section, where nearly four dozen playable games (including several from the Atari exhibit) reside. "Atari by Design" is currently on display, and will continue through September 8. Admission is $13 for ages 2 and older. Tokens for the "eGameRevolution" games are not included in admission price. Museum hours are Monday-Thursday 10 a.m.-5 p.m.; Friday-Saturday 10 a.m.-8 p.m.; Sunday noon-5 p.m.

Drive-ins are fun and all, but let's be honest, they usually don't provide optimal viewing conditions. This is assuming, of course, that you're actually there to enjoy the films and not just waiting for the right moment to start getting handsy with your movie-going companion. Regardless, this summer the Dryden Theatre (900 East Ave., dryden.eastmanhouse.org) is here to help, giving movie buffs all the fun of the drive-in, but with the picture quality we've come to expect from the newly restored landmark theater. The line-up of films is chock full of some of nerd culture's favorite things: giant monsters, badass martial artists, zombies, and, uh, Burt Reynolds. The series kicks off July 5 with "The Giant Claw," a lesser-known selection from the 1950's creature-feature genre (starring a monster that has to be seen to be believed), followed by George Romero's original zombie classic "Night of the Living Dead" on July 12, then the Bruce Lee masterpiece "Enter the Dragon" on July 19, and concluding with "Smokey and the Bandit" on July 26. Just keep your hands to yourself, buddy. All screenings begin at 8 p.m. General admission price is $8, or $6 for students and members.

For all the fun of medieval living without all the worry of that pesky Bubonic plague, head out to the annual Sterling Renaissance Festival (15385 Farden Road, Sterling, sterlingfestival.org), where every weekend from July 6 to August 18, more than 100 stage and street performers, musicians, and comedians come together to recreate an English Renaissance village. It's a well-known fact that chowing down on a turkey leg while cheering on your favorite knight as he beats the heck out of his opponents in a jousting tournament is the best possible way to spend a summer afternoon. The festival also holds themed event weekends throughout the summer, like the Wine, Chocolate, and Romance Rendezvous on July 13-14 and a Pirate Invasion weekend on July 27 and 28.

From otaku to hardcore games (whether it be tabletop, third-person shooters, role-playing games, or others), there's something for you at Ryu-Kon Anime and Gaming Convention (101 Old Falls St., Niagara Falls, ryu-kon.com), held this year in its new location at the Conference and Event Center of Niagara Falls. The event kicks off July 26 and 27 with panels, workshops, game tournaments, anime screenings, an artist alley, comedians, and special guest appearances, including Alexis Tipton (FUNimation, "Full Metal Alchemist: The Star of Milos"), Lizbeth R. Jimenez ("Sacred"), and Benny Bohannon (Epic TV Saga). Then on July 28, the con invades the greater Niagara Falls area for a special event day featuring the Ryu-Kon Extreme Treasure Hunt, in which teams of one to four people race to find items and complete tasks on both sides of the border. The theme for this year's convention is steampunk, so there will also be plenty of extra activities geared toward the genre, including a formal steampunk ball. 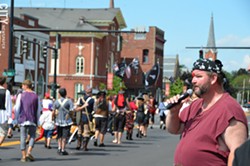 Who doesn't love a good pirate festival? Any excuse to brandish a sword and talk freely about plundering booty will always be A-OK in my book. Palmyra's Pirates of the Erie Canal invade the village and port of Palmyra for the 7th Annual Palmyra Pirate Weekend (132 Market St., Palmyra, palmyrany.com/pirates/2013/home.htm). The festivities kick off Friday, August 9, with an outdoor screening of "The Goonies" in the Palmyra Village Park. Saturday's activities include bed races, canal walks, museum tours, a treasure hunt, a Pirate Kazoo Band parade, and a 5k race benefiting the Palmyra-Macedon High School.

These are just a few of the many geek-friendly events taking place around Rochester this summer. Keep an eye on City's website (rochestercitynewspaper.com) for more events that are worth leaving the comfort of the couch.