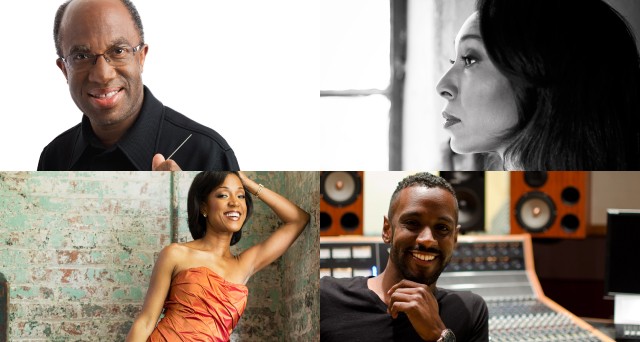 Attend virtually any orchestral concert in the country, and you’re likely to see a similar picture onstage: a sea of white performers, with very little racial diversity. The perception that classical music is predominantly a Caucasian pursuit has endured for several centuries, but that idea doesn’t reflect the current reality.

The biennial, six-day celebration known as the Gateways Music Festival has brought black classical musicians together since 1993. The festival was founded by pianist and former Eastman School of Music professor Armenta Adams (Hummings) Dumisani. Rochester has hosted the Gateways since 1995, and the 14th iteration of the festival, presented in conjunction with the Eastman School, runs from August 6 through 11.

Led by the festival’s president and artistic director, Lee Koonce, this year’s series of concerts and events will take place at over 50 Rochester-area venues. Over the course of six days, Gateways will feature over 100 American and international musicians. These artists include such conductors as Gateways Music Director Michael Morgan and Black Pearl Chamber Orchestra’s director Jeri Lynne Johnson, instrumentalists such as New York City-based violin soloist Kelly Hall-Tompkins, and Atlanta-born composer Carlos Simon. The festival will close with an August 11 performance at Kodak Hall from high-profile mezzo-soprano Denyce Graves and the Gateways Music Festival Orchestra, led by Morgan.

The festival also highlights the historical contributions of important artists whose careers broke new ground for musicians of color in classical music. Differing from previous years, the 2019 festival will focus especially on the works of composer Florence Price, who lived from 1887 to 1953. She wrote in a wide variety of mediums: orchestral works such as symphonies and concertos; chamber music and numerous keyboard pieces; and choral works, arrangements of spirituals, and solo songs. Price stands out for “her fusion of obviously excellent classical training with extended jazz harmony,” Morgan says. Price’s Symphony No. 1 became the first symphony written by a black female composer to be played by a prominent American orchestra in 1933.

Kelly Hall-Tompkins first became acquainted with the music of Florence Price when Hall-Tompkins performed Symphony No. 1 at a previous Gateways. This year, she will be the featured soloist in the August 10 performance of Price’s Violin Concerto No. 2, conducted by Jeri Lynne Johnson at Hochstein Performance Hall. “It’s everything that I love about the post-Romantic period, with a definitive American voice,” Hall-Tompkins says of Price. “I find it to be a little bit Richard Strauss, a little bit 1940’s film music, and just a very unique voice that doesn’t exist in any other composer.”

As an African-American female composer in the Jim Crow era, Price dealt with her share of racial and gender discrimination, and her music has only recently been performed more frequently. Gateways is well-positioned to give attention to composers who didn’t get it during their lifetime, Morgan says.

Johnson thinks Price was hindered by a lack of available mentors and professional avenues to have her work performed, which kept her from producing even more music. Johnson sees mentoring as vital for new generations of minority classical musicians. “Having young musicians of color see themselves represented in orchestras and getting mentors of any ethnicity or background is an important thing,” she says.

Johnson has struggled against racial biases in her own career. Despite what she felt was a strong showing as a finalist for a conductor position at a regional California orchestra in 2007, Johnson didn’t get the job. When she asked about the reason, she was told it was a matter of marketing: “You don’t look like what our audience expects the conductor to look like.”

In response, Johnson founded the Black Pearl Chamber Orchestra the following year. She has since hired high-caliber musicians of varying ethnic backgrounds to change perceptions about what classical music should be and who should be performing it. “I think what’s odd about Black Pearl is not that we have musicians of color,” she says. “It’s that we have musicians of color in a concentration that demonstrates that it is not unusual; they are not hard to find.”

Unfortunately, racially diverse ensembles like Black Pearl are uncommon in the world of classical music. But Morgan says Gateways provides a kind of support system, a rare context in which African American classical musicians are not in the minority. “In order to see that there is this community, this foundation, this history,” he says, “you have to bring people together as a reminder that they’ve always been there and that there are lots of them.”

By embracing the vibrant professional community of black musicians in classical music, Gateways seems to be a festival that benefits the performers as much as it does the audience. “First and foremost, Gateways is about making great music and giving visibility to artists of color,” Hall-Tompkins says.

Composer Carlos Simon, who is participating in the festival for the first time, will hear the performance of a new orchestral arrangement of his gospel-inspired “Amen!” co-commissioned by Morgan for Gateways. The composition is a kind of ode to the Pentecostal African-American church, “a very spontaneous, very energetic, celebratory American experience,” Simon says.

His compositions frequently address the realities of the black experience in America, both historically and currently. Musically, Simon cites gospel, jazz, Motown, and R&B as especially undervalued. “A lot of times, African-American culture is played down,” he says, “and a lot of times, we don’t have a true appreciation for what it’s done for American music.”

Achieving more equitable representation for people of color in classical music, Simon says, begins with more inclusion at the administrative and artistic planning levels, as well as concerted efforts to establish long-term partnerships with musicians – such as a three-year composer residency rather than single concert engagement.

“If you’re developing relationships with artists that are sustainable, then it becomes an issue of relationship, and not tokenism,” Simon says.

The Gateways Music Festival, in association with Eastman School of Music, runs from Tuesday, August 6 through Sunday, August 11.  For details  on event times, prices,and locations, call 232-6106 or visit gatewaysmusicfestival.org.