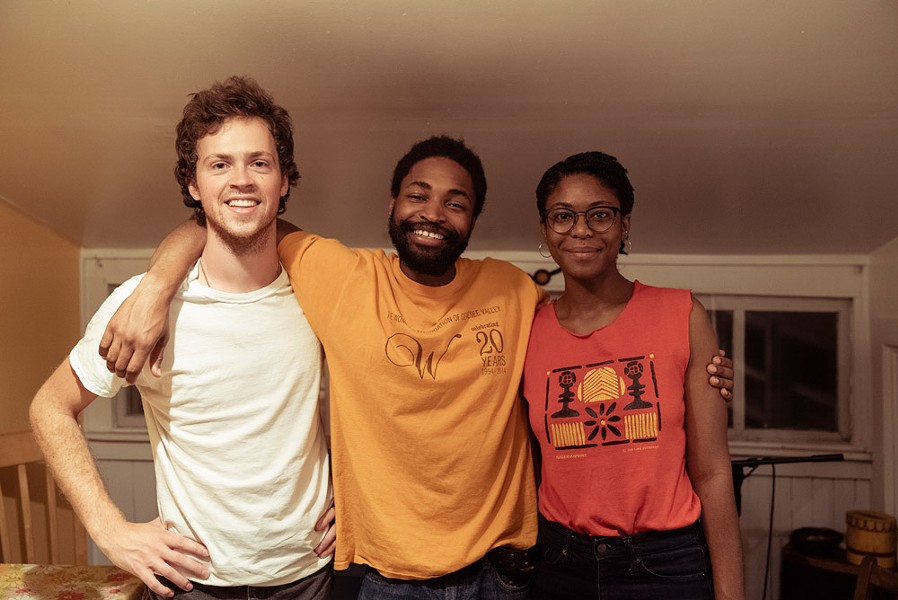 [UPDATED 9/20/19] For Rochester musicians Gary Lamaar and Cammy Enaharo, September is a time to celebrate new artistic creations. With his stint as co-frontman and emcee of the local jazz and hip-hop outfit Claude Bennington’s Fever Dream behind him (the group disbanded after a final show last winter), Lamaar is set to release his third solo album this month. His longtime friend and musical collaborator, singer-songwriter Enaharo, has wrapped a third album of her own, and the two musicians will release their latest records at a joint show at UUU Art Collective on Saturday, September 21.

Enaharo’s craft has evolved since her first release, the 2013 EP “A Different Kind of Comfortable” and the subsequent “From the Garage” from 2015. She frequently performs solo, often with a baritone ukulele and a rare electronic instrument called an omnichord. Additionally, Enaharo is one-third of the Rochester-born band Gold Koa, a progressive indie pop band whose other members Kamara Robideau and Matt Battle are now based in Los Angeles.

Lamaar’s first album, entitled “Self-Love,” was released in 2017, complete with a single and music video of the same name. The video looks like his music sounds: earnestly autobiographical and philosophically raw. His next album, “Letters” from 2018, was personable in its message. According to Lamaar’s Bandcamp page, it’s “a collection of missives. Some addressed to friends, some to fam, all addressed to Self.”

Both the release show and the albums will feature other musicians from the local community. On occasion, as is the case for the release show, Enaharo is accompanied by a band. At UUU, Enaharo will be supported by Dessert, a rhythm section duo featuring Eastman School of Music alum Ryder Eaton on bass and Lamaar on drum set.

Now feeling more at home with her artistic voice, Enaharo credits Lamaar and Eaton for helping hone in on a tone for the new album, a self-titled release under the updated moniker Cammy Enaharo & Dessert. “I feel a lot more comfortable at this point,” Enaharo says. “And how Gary and Ryder and I work together feels much better than doing it alone. I feel a lot of growth in this album.”

Her minimalist and soulful folk songwriting style could readily be likened to artists like Bill Withers and Fiona Apple. “5ive,”  a single on Enaharo’s new album, features verses by Lamaar and another local emcee, Moses Rockwell. The collaboration occurring between these artists and the palette of these compositions feel warm, organic, and familial in its embrace of human experience – like there’s nothing to express but mutual spiritual growth.

Enaharo cites songwriters such as Regina Spektor and Lomelda as sources of inspiration, and expresses admiration for her bandmate’s music as well. “I love Ryder’s music,” she says “It’s a huge part of my life at this point.”

Both Enaharo and Lamaar are from Rochester originally, beginning their musical journeys in their youth. While attending high school at School Without Walls, Enaharo was gifted her first ukulele by her mother. Along with performing at Boulder Coffee’s popular open mic in the South Wedge, Enaharo credits the online music platform SoundCloud for pushing her to work on her songwriting more sincerely. “I was really connecting with people on SoundCloud,” she says. After being a featured artist on the web site’s homepage, she saw an influx of follows, and continued to trade notes and advice with the supportive community of songwriters on the platform.

Lamaar studied drums at School of the Arts, and spent some time studying at New School’s jazz program in Manhattan as well. Since then, he’s been performing, writing, and working on his lyricism and beat production. “I’ve always played drums, or been interested in drums,” he says. “My dad was a DJ, so when I was little, I spun records, and still continue to do so. Music’s always been a part of my life.”

The title of Lamaar’s new album is “Freedom Rap.” The opening track of the same name is bookended by the refrain “fleet footed, loose tongue in the street,” establishing the emotional immediacy and quasi-punk ethos apparent throughout the album. His cadence sounds resolute and sovereign, delivering rhymes with a grit similar to emcees like MF DOOM and Talib Kweli.

“The theme of the album is living in a way that makes sense to you, even if it doesn’t make sense to others,” Lamaar says about “Freedom Rap.” Aside from being a jazz-head, he’s influenced by contemporary art rap, like that readily found on Bandcamp.

Enaharo and Lamaar’s  show at UUU Art Collective will also feature performances from such local musicians as drummer Brendon Caroselli and pianist Philippe Lewalle. In the true, art-gallery spirit of the venue, Atlanta-based visual artist Charity Hamidullah will be presenting her work, as will Hadara Creative Jewelry.