After Garth Fagan won a Tony Award in 1998 for best choreography in “The Lion King,” there might have seemed to be nowhere else for him to go.

Where he went was back to his studio in the anonymous-looking, nearly century-old building on Chestnut Street in downtown Rochester to work on another dance, “Two Pieces of One: Green.”

This time, he choreographed dancers not in hyena masks or lumbering like elephants, but unadorned and gliding and leaping across the polished floors of Garth Fagan Dance.

“When Garth came back from ‘The Lion King,’ it was clear to us that we were part of the creation of a legend,” Bill Ferguson, the executive director of Garth Fagan Dance, says in a new documentary about the man and his company. “A legend of a man, a legend of a time, a legend of a dance technique that transformed Broadway.”

The documentary, “Prelude: The Legacy of Garth Fagan Dance,” explores this chapter of Fagan’s fabled life and others. The film, produced by WXXI Public Media, debuts Sept. 8 at The Little Theatre. The curtain rises at 7 p.m. and a talk with Fagan is expected to follow. A series of airings on WXXI-TV begin at 9 p.m. Sept. 16.

Editing a film on the life of a man like Fagan comes down to making choices, and involves a limbo dance of technological sausage making.

Just a few weeks before it was to air, WXXI producer Katie Epner was making the final tweaks on video screens filled with colorful bars showing her the placement of each segment, and green spikes depicting the accompanying audio. She snipped a frame here and a frame there to fit the 58 minutes and 30 seconds time slot.

Perhaps because of such constraints, pieces of Fagan’s story are missing. There was his broken relationship with his father, an Oxford-educated man who wanted Fagan to follow in his footsteps as an academic, and not be … a dancer! There was his marriage that fell victim to two people with high career aspirations. There was the death of his 2-year-old daughter in a car accident. None of these made the documentary.

Yet, in that 58 minutes and 30 seconds, “Prelude: The Legacy of Garth Fagan Dance” presents a powerful sense of who Fagan is with an archaeological dig into Fagan’s distinctive personal style honed over 50 years.

We see him today, 82 years old, his aging dancer’s frame propped up by a cane, gingerly easing his way down the steps leading to his lush backyard, filled with vegetation and chirping birds, a mirror ball, a pagoda, and even a fountain.

We hear his distinctive speaking style, perhaps reflective of growing up in Jamaica, and how he drags out certain words for emphasis: Dancers are don-ceeers. He frequently cites astrological signs: “My brother Vir-goh.”

He is a large and colorful presence in shirts of Afro-Caribbean shades and patterns. The bushy mustache is omnipresent. The hairstyle evolves on a whim, a fountain of hair often tamed into a ponytail secured by colorful hair ties. As with so many who move in the orbit of Garth Fagan Dance, large necklaces are an essential accessory.

Here, we see the master of “The Lion King” in his lair. He lives alone in a red-brick neo-colonial mansion on East Avenue built in 1927. His home is filled with the art and tchotchkes of a world traveler.

Fagan lives life to its fullest. As a young man, he enjoyed the parties that followed a trip to Cuba to dance for Fidel Castro. And with his own troupe, he expected his dancers to live as well.

By digging through filmed interviews, some decades old, the documentary presents Fagan as he emerged on the national dance scene in the mid-1980s. We see video from a 1983 local segment used on the national television news show “PM Magazine,” including raw footage of Garth Fagan Dance rehearsals that was never used. From that same year, there are images from “Dance Black America,” a documentary created by D.A. Pennebaker, who’s perhaps best known for the 1967 chronicle “Bob Dylan: Don’t Look Back.”

Local filmmaker Carvin Eison, who did not have a hand in producing the documentary but whose footage is used extensively, has been following Garth Fagan Dance with a video camera since its inception.

“We just didn’t see people like Garth,” he says. He recalled Fagan’s green Jaguar sports car. His leather coat. The promotional shot of Fagan on the steps of a building and holding a Doberman on a leash.

At one point, the documentary turns toward the future of Garth Fagan Dance and gives us Ferguson sitting in The Best Coffee at the Market at Rochester’s Public Market, with Natalie Rogers-Cropper, the school director of Garth Fagan Dance, and choreographer Norwood “PJ” Pennewell. All three danced with the company. They have memories, yes. But they’re also discussing the impact of the pandemic.

And as Rogers-Cropper adds, “So we’re in the position of starting over.”

The parade of accomplished artists from nearby and beyond who chime in on Fagan’s legacy in this film is a testament to the lives he has touched.

We see Jacqui Davis, a SUNY Brockport professor emerita, at her home in Brockport, and with Fagan outside the school. She danced in the first piece Fagan wrote. A photo of her then has Davis wearing velour bell-bottom pantsuits.

We see Celia Ipiotus in her living room in Oyster Bay, New York. She is the creator and producer of the PBS show “Eye on Dance,” which featured video from 1983’s “Dance Black America,” the event that catapulted Garth Fagan Dance to the forefront of the dance world. She speaks of the dancers’ jazz sensibility, and “the magnitude of their physicality.”

Trumpeter Wynton Marsalis, in the Chestnut Street studio, reflects on his collaboration with Fagan on “Griot: New York.” He says, “What makes a work rich is the complexity of the relationships.” 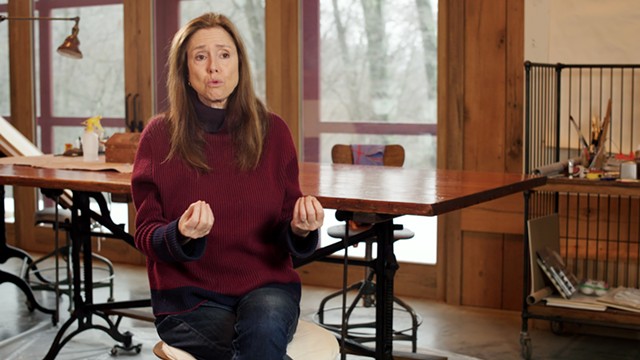 We see theater director Julie Taymor in her home in Hudson Valley describing the dances of “The Lion King” as “isolation movement,” and remarking on how the dancers articulated their bodies to mimic the animals they were portraying.

And yet Judith Jamison of Alvin Ailey American Dance Theater speaks of the stillness of Fagan dances, and how, “I wanted to be able to stop like that.”
We see Aubrey Lynch and Lindiwe Dlamini, cast members of “The Lion King,” at New York City’s New Amsterdam Theatre.

“He wanted dancers who were smart,” Lynch says, “were disciplined, who were unafraid and who would try anything.”

Stephen Humphrey, another colorfully clad character in a knit cap, bongos in background, in the dancer lounge at the Garth Fagan Dance studio. Humphrey looks up, and the camera follows his gaze to an old photo of the dance company that hangs on the green wall. “The women were really incredible,” he says. “They were definitely better than the males.” Somehow Humphrey has found a way to hang in there: He’s been dancing with the company since 1970, and is still a dancer today.

And we hear a collage of philosophical axioms that must be preserved for dance posterity. “You have to love more fully, so you hurt more fully,” Fagan says. “It’s a total commitment.” He speaks of his dancers “touching the stars with their feet.”

Just as Fagan does not abandon dancers as they age, he seems to have always been committed to their circle of life, not unlike the theme of “The Lion King” that made him famous.

We see Nicolette Depass Ferguson, who met her husband, Bill Ferguson, as a Garth Fagan dancer, describing how Fagan created a dance solo for her “and my growing belly” at the Joyce Theater in New York City on a night that resonated across America — the election of President Barack Obama in 2008.

“Not only was I able to perform six months pregnant with my first child,” Depass Ferguson says, “… I was making history for myself, for the company, for other women in the audience. Barack Obama was making history in the United States, in the world.

“I can’t thank Garth enough for that experience.”