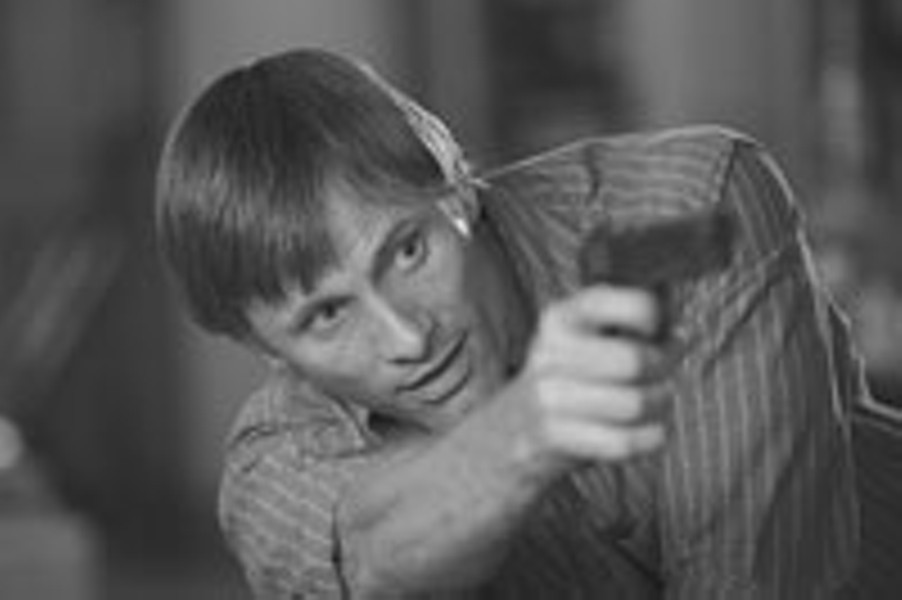 The New York Times Book Review's belated discovery of the graphic novel, which has been entertaining readers for some decades now, officially conferred a certain dignity on the form.

Much like their ancestors, the comic books, the graphic novels provide a natural source for motion pictures, which exhibit a similar penchant for sensational stories, fluid points of view, frequent changes of focus and frame, and above all, visual narration. Mostly dark and violent --- no Archie and Veronica for these books --- the form has inspired such recent titles as the first of the Batman series, the Jack the Ripper saga of From Hell, and the dismal Road to Perdition.

The latest adaptation of the form, A History of Violence, employs an oddly domestic and ordinary situation for the development of its characteristically intense and bloody action. Its protagonist, Tom Stall (Viggo Mortensen) runs a diner in the small town of Millbrook, Indiana, and enjoys a quiet life with his wife Edie (Maria Bello) and two kids, one of whom, Jack (Ashton Holmes) suffers the bullying of a crew of louts at his high school. A couple of vicious thugs on a killing spree stop in Millbrook between murders and decide to hold up the diner and shoot Tom and his employees just for the hell of it, which precipitates a shocking series of killings through the rest of the movie.

When the thugs threaten a waitress, Tom reacts with startling speed, disarming one of the villains and shooting them both, which turns him into a national media hero. The publicity also attracts another hoodlum, a mobster from Philadelphia named Carl Fogarty (Ed Harris) with a blind eye and a ruined face, looking for a man named Joey Cusack. He claims that Tom is Joey, the mob killer who blinded and disfigured him with a piece of barbed wire.

Though he denies any connection with Fogarty, the gangster and his henchmen menace Tom's family, planning to force him to accompany them back to Philadelphia, presumably in order to kill him. Once again Tom manages to thwart an imminent massacre, with the ambiguous outcome of alienating his family, who now know he is Cusack, ironically because he saved their lives. When Tom's mobster brother Richie (William Hurt) calls to summon him to Philadelphia, he takes off for the East, driving night and day toward his destiny.

The movie exhibits its origins in the graphic novel through its steadfast concentration on the surfaces of its action, virtually eliminating anything like a context beyond the immediate situation of menace and brutality. It only feints at some backstory to explain how Tom ended up in Millbrook, and met, courted, and married Edie, thus neatly avoiding almost all possibility of emotional complexity. The only real emotion involves the disintegration of Tom's relationship with his family once they witness the force of his reactions and understand the extent of his deception.

Although it deals to some extent with family, the picture actually participates in the great tradition of the gangster flick. It exhibits the requisite sense of inevitability, of a fate that initially sends the two killers to Millbrook to choose Tom Stall as their victim, brings Fogarty back as the disfigured embodiment of his former self, shows the impossibility of escaping the history of the title, and finally drives him to return to the city of his past. When the movie reaches its climax in the confrontation between Tom and Richie Cusack, it reminds us that gangster films are almost always brother films, depending on the relationship of siblings for patterns of loyalty and betrayal.

Underplaying appropriately, Viggo Mortensen conveys an adequate impression of a man desperately trying to change himself and build a new life, but the dialogue and characterization, which presumably derive from its source, rarely transcend a kind of glum ordinariness. He explodes into violence convincingly, however, in several shockingly bloody sequences, suggesting more of the icy killer than the small town restaurateur.

The urgent pace, the moments of vigorous action, and the palpable energy indicate some of the advantages of adapting the original form to film, but A History of Violence also suggests some of the drawbacks, especially in the paucity of context and the perfunctory approach to emotion.

Let's face it, a comic book is still a comic book, whatever its writers and readers choose to call it.

A History of Violence (R), directed by David Cronenberg, is playing at Pittsford Plaza, Tinseltown.

Movie Reviews A History of Violence