Gaelen McCormick and 'The Pandemic of Creation'

"It was right around the time of the Women's March in D.C.," she says, "and, you remember how everyone was making pussy hats? And I thought, well, that doesn't look too hard, why don't I get some yarn and watch a YouTube video. And actually, that kind of saved me for months, learning how to crochet, and learning how to be creative in a way that really felt good, but didn't have to involve sound."

That was January of 2017, and she needed something that didn't involve sound. Because McCormick, a bass player with the Rochester Philharmonic Orchestra, was now almost completely deaf.

"I think when you're feeling backed into a corner, it's so hard to see there are so many options open to you," she says. "It's so hard to not play to what you know, even when it's maybe hurting you, or not taking you to where you want to go."

Perhaps most importantly, "I was having a ton of trouble being creative," she says.

The self-doubt, and the creative drought, is over. McCormick has moved on to a new chapter. Her just-published book is "The Pandemic of Creation: Recognizing Freedom in Loss and Opportunity in the Void." Written with Sraddha Prativadi, who was McCormick's doctor, and now her friend. Prativadi is also a fellow creative person, an Indian dancer whose own neurological challenges with her hands left her unable to continue her work as a doctor at Highland Hospital.

They initially began writing the book as an easygoing spiritual instruction manual, built around the void in their own lives, the loss of their rewarding careers, and how to move on. Chicken Soup For Derailed Professionals. They toyed with amusing potential titles such as "Get the Gum Off Your Shoe – Unstuckify Your Life."

They had never heard of COVID-19. None of us had.

But the coronavirus pandemic brought the book's purpose into sharper focus. As McCormick writes on her Facebook page, "We wanted to serve folks who were suddenly without a career, and help folks who are deeply stressed by the current events in our country." 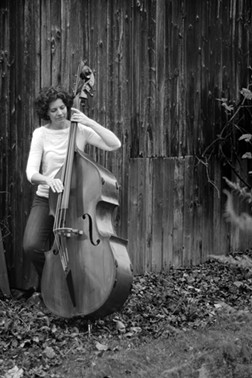 McCormick's hearing loss is a condition called Ménière’s disease. As a classical musician, she finds herself in good company; Beethoven apparently had it as well. Bouts of vertigo, and wild swings where "one day I'm hearing fine, but by the end of the day it's gone." Lots of pitch distortion. The disease usually levels off after about five years, but McCormick lived with it for 15. And while Ménière’s disease is almost always confined to one ear, McCormick had the "unlucky coincidence" of the disease settling in first one ear, then the other. "When I fully lost my good side, it just went away for seven months," she says. "I just woke up and it was gone."

She has a cochlear implant in one ear, and wears a hearing aid in the other. With that technology, she can communicate just fine, although, "I can't hear music, so it doesn't make sense for me to keep going as a musician," McCormick says. "But every inch of my body was like, 'No I don't want to leave this field.' But I would think about performing with the RPO and my body would also say, 'No, you're not going back onstage.'"

Crochet was a way of regaining that missing sense of creating something — McComick admits she quickly became what she calls a "yarn snob" —but now she has purpose again in her life. Nowhere in her biographical material does McCormick refer to herself as a "former bass player." The label still fits in her role of program manager of  Eastman Performing Arts Medicine, and as a music teacher.

"For teaching it's actually been OK, since I'm only teaching material that I know," she says. "I'm teaching really visually because the bass is so big. So I don't see any reason to call myself a former anything yet."

Classical bass player, teacher, self-help guru and author. This was not a plan. Her logical brain, McCormick says, asked how she could teach if she couldn't hear? But she discovered the real question was, "I want to teach, and I can't hear — who can help me?"

That was her spirit talking.

"It was like magic," McCormick says. "All of a sudden, people I hadn't reached out to were saying, 'Hey I know this deaf bass player in San Juan, have you ever talked to him, he's completely born deaf and he plays in a symphony.' 'Oh, I know this person with a cochlear implant who teaches violin.'

"It was crazy, I didn't reach out to any of them. I didn't broadcast that I was thinking about this, because I was so scared that it might be a complete failure of an idea. And all of a sudden, it was like, the universe is like, 'Oh, you want to do that? Here, here, try this, try that.' It's really weird, and yet I've seen that happen over and over again. That's when I stop saying, 'I can't, whatever, because of that, my disability, my income, my location.' If I just say what it is I really want to do, and who can help me think about this, it just opened up so quickly."

It's timing. And the idea McCormick and Prativadi propose in "The Pandemic of Creation" is to use your time well. Even when times are bad.

"We basically started talking about the vast number of people who were unemployed, and I was really shaken when I thought about how long it's going to be before live music can come back," McCormick says. "I mean, live music could come back. We could just take over Eastman Theatre and just stream all of that out, because we wouldn't have room to seat anyone if we spread the RPO out with social distance."

In their book, McCormick and Prativadi are pointing toward a more normal way to be around not only each other, but ourselves.

"We both started thinking, 'Boy what people really need to do tap into their creativity and tap into what their next step might look like, even if it means staying in their career," McCormick says. "Like how can you be thoughtful about what your heart is telling you you want to do, and how can you take the time to listen to that?"

So it became apparent that "Get the Gum Off Your Shoe" was too flip for these times. These pandemic times. But McCormick and Prativadi wanted to refine the definition of pandemic.

"Your nervous system is firing like crazy all the time, giving you that fight or flight, and it just locks you out from any sense of who really you are," McCormick says. "So that's when we decided to pivot the title. And we were both like, 'Oh, I don't know, that could be dangerous, that could be really dangerous, so let's make sure we really spell it out.'"

They spell it out on the book's second page.

Arriving at "Creation," as in "the act of bringing the world into ordered existence."

And then, the Pandemic of Creation faces yet another challenge in the long, hot summer.

"I'm carrying a lot of expensive gear in my ears right now," McCormick says of the technology that enables this conversation.