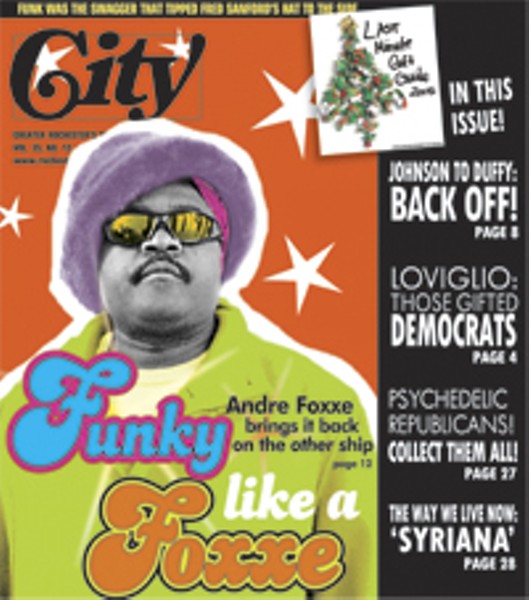 Foxxe made a lovely bride back in the P-Funk day.

"Funk has nothing to be scared of and it's a kick-ass thing": Andre Foxxe today.

Funk is a feeling that's hard to describe.

During a recent basement rehearsal, funkster Andre Foxxe conducted his new backing band with things like "feel it," "just hang back," and vague, circular motions. There were no charts.

Foxxe doesn't confuse music theory with the music. That would just clutter the honesty and feel. And funk is all feel.

He's a naturally gifted musician, not technically hung-up but extremely intuitive. He vacillates easily between instruments, though the guitar is clearly his natural extension.

In late '60s Detroit, things were getting funky. Funk pioneer George Clinton was beginning to push boundaries and freak a few people out along the way with assorted over-the-top projects and ensembles. And little Andre Foxxe dug it deep right away. It was his destiny.

"The very first record that I ever purchased on my own with my little saved up allowance was a tune called 'A Joyful Process,'" Foxxe says. "It was a Funkadelic instrumental tune. This had to be 1967 or '68. I went to the music store, I got the record off the shelf, and I gave the lady my dollar."

The clerk accidentally gave Foxxe his money back along with the 45.

"When I played the record, my mother and father freaked," he says. "It was like, 'You really like that kinda stuff?' I'm like, 'Yeah, don't you?'"

The funk fuse was lit.

"Had I known they were right in Detroit at the time, I would've run away from home and joined The Funkadelics at age 8," Foxxe says.

But it wasn't until the late '70s when Foxxe was a teenager that things started to fall into place. One of Clinton's singers lived in Foxxe's neighborhood and introduced him to the band leader and his entourage.

"They offered me a job --- believe it or not --- driving them around," Foxxe says. "I was really like a gopher. I didn't tell them I played any instruments for a long time."

But Foxxe could play jazz drums, bass, and guitar, and he started jamming with Clinton's sons. He played with Tracey Lewis in Treylewd and with Darryl Clinton in Son of Funkenstein.

When Foxxe finally broke out the instruments in front of Clinton Sr., George loved it.

Because of legal finagling with various labels, Clinton was constantly changing the name of the band, though the lineup remained basically unchanged.

"Really Parliament was the singers, Funkadelic was the band," Foxxe says.

By the time Foxxe joined it was still Parliament/Funkadelic, but legal battles in the early '80s forced yet another name change to The P-Funk All-Stars. It was the same group of musicians. Foxxe was simply added on and plugged in.

"George has always been a dude that has big bands," Foxxe says. "There was always room for one more. At any given time it was from 17 to 22. There were at least four guitar players --- with a spare hangin' out."

Besides bringin' the funk into the general consciousness, Clinton has always raised eyebrows. His shows are a space-age Mardi Gras, a pre-historic, futuristic Babylon, a multicultural carnival of funky freaks. Dudes in diapers, neon dreadlocks, and wedding gowns: Clinton's children, one and all.

When Foxxe joined up, he donned a wedding gown and platform boots, grabbed his guitar, and hit the road.

Clinton quickly picked up on Foxxe's talent as a producer as well. Foxxe appears on every George Clinton recording from 1979 to 1996 as either producer, songwriter, guitarist, or vocalist. He produced the singles "Quickie," "Do Fries Go With That Shake," and "Nevermind."

"I got to tour the world at least three times," he says. Foxxe appeared with the group in movies like PCU, House Party, Howard the Duck,and TV shows like New York Undercover.

Foxxe learned and lived the lifestyle --- an experience he calls "GeorgeClintonUniversity" --- until a high-heel accident in 1996 in San Francisco soured things.

"That's what caused my demise: those platforms," he says. "I actually fell off the staircase of the Mother Ship and broke my leg."

Clinton didn't have Workman's Comp insurance, and Foxxe forced the issue. Clinton took it personally and let him go.

Out from under the Clinton umbrella, Foxxe embarked on several solo projects, using various P-Funk members, P-Funk disciples like The Red Hot Chili Peppers, and "just whoever would hang out with me," he says.

He had moved to Rochester in 1991 on one of the stateside treks with Clinton.

"I ended up liking the city, meeting a nice lady, and hookin' up," he says.

United Sound Recording Studios bigwig Don Davis signed Foxxe while he was still with Clinton. Foxxe recorded his first solo album, I'm Funk and I'm Proud, with Davis for the P-Vine record label in 1994. It was released in Japan and Australia. It was later re-released in the States as The Foxxe Files: A Dossier on Sex and Animals on the Wefunk label in 2001. He recorded his second solo project, Myllinium, also for P-Vine,in Rochester at Frank Scheidt Audio in 1998.

Foxxe kept busy with sideman and solo work until he went into musical hibernation eight years ago.

Foxxe is a seasoned pro who expects the band to be on his wavelength and groove. What's in his head needs to come out of their fingertips. In rehearsal, you can see every part of a tune translate through his body as the band grows more familiar, tighter. He shrugs a cue to the guitar player. He eyeballs a break to the drummer. His legs are locked into the bassist's groove.

The musicians, in their day-job clothes, are crowded into a basement rehearsal space in Gates. The music rocks with an r&b sophistication, in part due to Foxxe's soulful pipes and the musicians' casual proficiency.

They've been rehearsing every night for about a month now. And though it's the core group of three guitars, keyboards, vocalist, bass, and drums, there's talk of a horn section and background singers and who knows what else. It's gonna get big and crowded on that stage. Clinton would be proud.

And once they latch on and get in the pocket, Foxxe lets loose with some loud, rock-rooted guitar. He digs into the high end voraciously and holds the bottom together with chords that are yet to be named. With the steady groove of his band beneath him, Andre Foxxe is funky and mean. Wah-wah, flanger, and thick distortion accent a tone born of the quasi-psychedelia Clinton no doubt sparked in him.

He's happily married with four kids and a straight gig in the local Stagehands union, but there's still an itch to be on stage that needs to be scratched.

"I just wanna play the guitar again," he says. "I'm calling it 'Andre Foxxe,' but the concept is the new sensical, no-nonsensical musical. That's where I'm at."

Foxxe has new material but promises to hit on some of his P-Funk hits.

"There's nothing nostalgic about what I'm trying to do," he says. "What I wanna do is not bring funk back, because I don't think funk went anywhere. I just think the ability to use that four-letter word and then stand on stage and put some power behind it has faded."

Foxxe credits hip-hop and the nouveau-hippie jam scene with keeping funk alive. Yet he blames bands that don't go deep enough for hurting it.

"You've got a lot of bands that are almost funk," he says. "But if you don't live it, if you don't feel it, man, it ain't funk to me. Funk ain't dead. Funk has nothing to be scared of and it's a kick-ass thing. And people wanna see it."

Foxxe still dresses slick but you won't see the wedding gown or nun's habit or platforms. There's no Mother Ship.

"It's time to get back on board, man," he says. "Instead this time it won't be on the Mother Ship, it'll be on the other ship."

"It may not be as glamorous with the costuming and all that type of shit that it used to be," he says. "But the music itself, the pulse behind it itself I --- not wish, not hope --- am going to put it in a futuristic frame of mind."

He'll head back to the studio at the end of December to begin working on a new album for Mo Music, a Malaysian record label based in Quebec. He's patched things up with Clinton and there's talk of touring with him again. He'll just have to be careful around the Mother Ship.