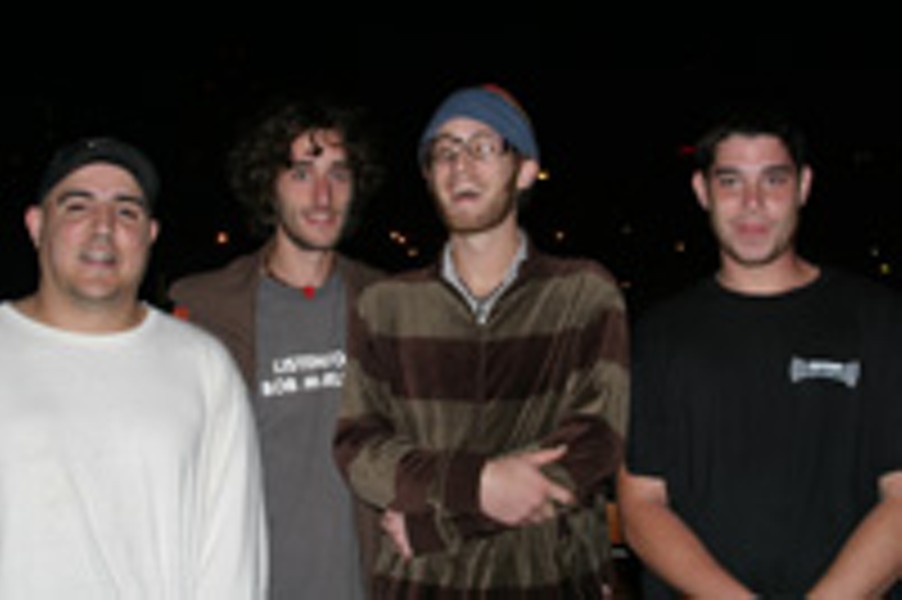 A young girl seductively swings her hips between two zip codes while a long-haired cat does an interpretive dance that looks like he's swatting mosquitoes or driving a bus. A bar back does the camel walk weaving in and out of pockets of people undulating in unison, diggin' and dancin' to Giant Panda Guerilla Dub Squad.

It's just another night on the town searchin' for thrills, and you stroll into Tonic with a mild rhythm jones. And sure enough, you soon find it near impossible to stand still. Yup, you're dancing. I'm not just talking the standard too cool/too awkward thumbs in belt loops, head bobbing --- you're actually dancing.

Every Thursday for the past few months this young quartet (and multiple guests) has played a residency gig at Tonic --- for the Tonic crowd and beyond. It is truly a mix of ages, cultures, and callings. Young kids, old kids, guys that shave it all, and girls that don't shave at all, they are all there groovin' on the one-drop.

Giant Panda Guerilla Dub Squad has spent the summer on the East Avenue nightclub's outdoor deck overlooking Rochester's meager skyline. And they've consistently packed the joint. They play reggae that's pure in its musicality and fresh in its originality. Though they'll break out the occasional cover, the band is incredibly creative.

And when they do give their treatment to tunes by the masters like Jimmy Cliff, Peter Tosh, or Bob Marley, they do it their own way. No phony "yah mahn" Jamaican accents or white-boy dreads (see John Brown's Body). The music does the talking as it bounces warmly off the neighboring outdoor walls.

"It's the catchiness," says singer-guitarist Matt O'Brian. "It's like soul music, Motown music but it's got, like, a heavier groove. People say 'funkier than funk' about the one-drop."

The name's pretty funky, too.

"In Tom Robbins's Another Roadside Attraction there's a band called Giant Panda Gypsy Blues Band," says O'Brian. "It's like a play on that."

"We used to be called Bomb Squad," says bassist James Searl. "But there's like four other Bomb Squads."

The members grewup in Brighton, but the group officially kicked off in Ithaca, where Searl went to school. This lineup "bounced around Ithaca for two years, playing every club" before returning to Rochester where it got the Tonic gig by chance.

Roots-reggae purveyors Bear Bones had held the slot during the spring. GPGDS's O'Brian and Searl had both taken lessons from Bear Bones guitarist Tony Cavagnaro. And when Bear Bones went on vacation, Cavagnaro suggested his protégés fill in. GPGDS drew a huge crowd and rocked the joint, permanently landing the gig.

"There was this big thing 'we don't wanna take the gig, man,'" says O'Brian.

But Cavagnaro didn't mind. He frequently sits in with the band and twiddles the sound knobs when he isn't rolling cigarettes. He harbors no grudge and feels their attention is well deserved.

"They're awesome," he says.

So GPGDS won the club's attention, crowd approval, and Cavagnaro's blessing. Sure, they're nice guys who attract an enthusiastic audience, but it's the music that makes them legit and undeniable.

Guitarists Matt O'Brian and Dillon Savage offer an unusual twin wah-wah attack that sonically swirls and chops. Drummer Chris O'Brian effortlessly flips the beat with syncopation, flourish, and a rock-steady drive. All members of the group are proficient and innovative and pack a little biz-buzz in the sh-show, but it's Searl's slow-motion whiplash hooks and deep grooves that lock the band in and fill the dance floor.

The songs are built on a skeletal dynamics. They frequently start off simply with O'Brian's plaintive voice and the trebly down-strokes of his guitar, then gradually build and climax. Other tunes set the precedent quick, the rhythm section swinging with as much forceful allure as the Death Star's tractor beam.

But this is ethnic-based music; it's Jamaican. More often than not bands do it cheaply or wrong with excessive pop-punk acceleration, or in such a watered-down hybrid fashion that the heart is all but gone. GPGDS wanted to do it right and worked hard nailing reggae's reversed beat.

"It took us a while, getting the beat," says Chris.

"It was tough just not growing up with the music where people that are ethnically based grow up with it," says Matt. "The one-drop is hard. Part of the appeal with the reggae is that it's different."

The group has worked in a handful of studios but hasn't recorded in any of them. Either they haven't hit their stride or they are just perfectionists.

"A little of both," says Chris.

"The reggae we do, though, is weird," says Searl. "[The studio] is just not a place where we've found that we can make really happenin' music."

So the band will release a recording of live tracks performed at Tonic. They'll burn a limited amount of discs and Photoshop some sleeves.

Matt chuckles at the homegrown ethic.

The band will continue its Thursday night stint indoors as the weather gets cooler: the young, not so young, hip, hippy, and fly still need a place to dance.

Looking at four white boys from Brighton it's obvious --- they ain't Jamaican. Listening to their groove, it's hard to tell. Get yourself moving on the dance floor, and it really doesn't matter.