The 24-year-old artist from Rochester wasn’t after swagger or bravado with his stage name (pronounced Skitso-Love-Hearted), but rather a reflection of himself and the inspiration for his music. Pettway has schizophrenia.

“I realized I was talking to the voices in my head,” he says. “And to take myself more seriously and to be more honest with my music, I took my diagnosis — schizophrenia — and I took my love for music, and I put that into a name.”

Pettway is intimately transparent about how his life and art intersect. To speak with him, or to listen to his new album “Full Body” — which was released digitally in August — is like opening a book, with all its insides laid bare in black and white and the textured remains of pulp embedded in the pages.

Three years ago, as he recalls, Pettway was living in Atlanta, when a string of sudden bad luck left him without a girlfriend, a car, or money. Distraught and hopeless, he says he contemplated suicide, and charged police claiming falsely that he had a gun. The officers, all of them white, trained their guns on him, he says, but tased him instead.

Another time, Pettway says, he approached police with a knife to his throat, threatening to kill himself. The officers took him to the hospital.

“It was people you wouldn’t think that saved me,” he says, “and you would be surprised who turned their back.”

Pettway started life in Rochester, but split time between homes here and in Kentucky after his parents separated when he was a toddler. His mother, Tawana Bain, who sometimes acts as his manager, recalls that he showed an early interest in music. When Pettway was 12, Bain booked time for him at a studio to record his first album, the eight-track collection “For Better Days,” which he originally cut under a different stage name.

But Pettway was already showing signs of mental illness: increased anger, paranoia, and his insistence that he was hearing voices, Bain says. She took him to see several psychiatrists, none of whom found anything wrong with him.

“He’d walk into a room, and he would look just like an average kid, and he’d talk his way out of what it was that I thought was wrong,” Bain says.

Pettway would go undiagnosed until he was 18, when he was admitted to a psychiatric ward in Louisville and medicated. Not unlike many sufferers of schizophrenia, Pettway’s path from awareness of his illness to proactively managing it was a long one.

After his diagnosis, he was in denial for two years, bouncing from city to city in Kentucky and Florida and Georgia, where he threatened suicide-by-cop.

He eventually found his way back to Rochester, where he was admitted to a mental health ward, and later lived with his father. Still, he took his medication only intermittently, and at one point, stopped altogether.

That was when Bain gave her son an ultimatum: Take his medication or she would cut off the modest monthly allowance she had been giving him and turn off his cell phone.

Pettway accepted and, with the help of counseling, says he has come to terms with his illness and channeled it into writing and producing music. He scrapped the series of stage names he had been using, and settled on Skitzo LuvHartd.

“When he landed on Skitzo LuvHartd I thought I was going to jump through my skin, because that was the first time that I realized that he’s beginning to accept his condition, that he’s embracing, like, ‘OK, I might have this, but I can use this for good,’” Bain says.

Pettway, who currently lives with his sister in Rochester, will have been on track for a full year come December, the month he turns 25.

“I had to learn to concentrate beyond the voices,” he says. “You gotta understand what reality is, 100 percent of the time, otherwise you’ll get lost in a fantasy world and make no sense.

“And I have to really hone in and really focus on the topic,” he goes on. “It sounds like I’m all over the place, but there is a general idea that sparks many, many thoughts. And this is what you get when you get my music.”

His hip-hop is a vivid hybrid of established and emerging rap styles that combines the pop aesthetics of mumble rap with concise, potent lyrical messages and “boom bap” beats of such artists as Talib Kweli and Mos Def.

“Full Body” focuses on racism in America with empathy, particularly when Pettway dwells on the voices neither he nor anyone else can hear anymore — those of Breonna Taylor and George Floyd, whose deaths at the hands of police sparked protests of racial injustice across the country.

On the album’s fourth track, “Never,” with production by Readhead, Pettway lets loose with a disarming spitfire delivery:

Surrounded land/ By white man/ Why man?/ One of me/ Son and man/ Murder me?

The album is a departure from his earlier work, the album “Playdead,” with its seductive, slow-jam R&B samples and nuanced, multi-textured production in songs such as “LIQuor N LiFE.”

But “Full Body” is an evolution of Skitzo LuvHartd’s four-song EP “ThankYouEarl” and its hard-hitting sociopolitical commentary.

“hung Lynch rope.,” a single from “ThankYouEarl,” lasts only two minutes and 13 seconds, and it doesn’t take long for Pettway to get to the blistering and blunt point:

How they found me: lynched, hanging, from the edge of wisdom’s grip/ I was runnin’ from some n****s, ran into some racist pricks/ Fuck a side, I’d rather die here on the fence/ To Mr. Black and Mr. Pig, I’m just lynched

The song concludes with the haunting voice of author and activist James Baldwin, speaking about how long-term racial oppression can destroy the psyche and a sense of worth on the PBS television program “SOUL!” in 1971. 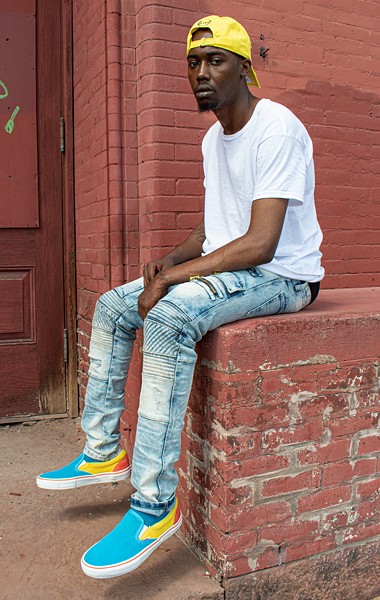 “I’ve seen the same people in every color — in every color, in every race, every culture,” he says. “I said it just last night: I’m the most flawed person in the room, and so are you. So we are equal. And we do bleed the same.”

Of “Full Body,” Pettway says he hopes his audience can relate and find the meaning of his music in their own lives.

“I didn’t want you to just rap it because it felt good,” he says. “I want you to feel where I’m coming from.”

“People are always complaining about a pain that I can relate to,” he says.