"Pieces of My Soul: New Works by RANGE"

You can usually tell when a graffiti artist has a gallery show by the names dropped all over the block. Following the Saturday night opening of Victor "RANGE" Zarate's solo show at AXOM Gallery, monikers in colorful calligraphy were scribbled and scrawled on the city's surfaces up and down Anderson Avenue — consider it a guest book that extends to the outside of the space.

It's not like these tags are entirely out of place. AXOM is nestled in a stretch of buildings informally dubbed "the legal wall," where graffiti was once allowed. Though that permission was revoked years ago, the burners, pieces, and tags remain — it's a dense visual made by many hands over the years. 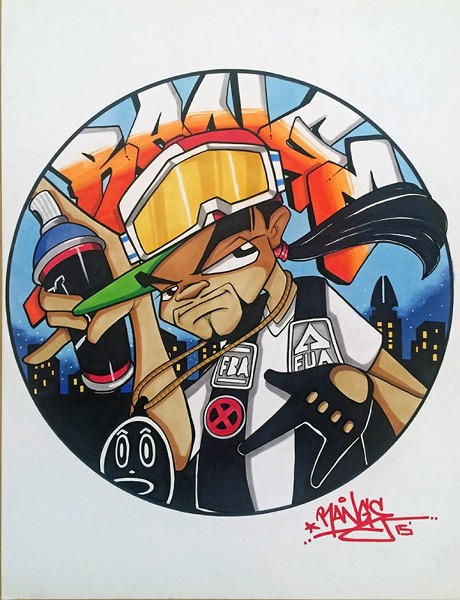 RANGE's show inside the gallery consists of paintings in acrylic, oil, airbrush, and spray paint, and markers on Bristol board and other surfaces. The selection highlights his immaculate skills in letterform and portraiture as well as his sharp wit, which is often expressed through his titles.

Though this is RANGE's first solo show in a commercial gallery, he's a well-established figure in Rochester's art scene. RANGE is a member of Rochester's FUA Krew, which was established in 1989 and has members around the world, and he's a tattoo artist at Vigilante Tattoo. Plus he's a dedicated family man.

Growing up, RANGE faced many challenges, from living with minimal resources in the inner city, to undergoing multiple reconstructive surgeries to his face due to a birth defect. As physical activities were difficult to participate in, "his imagination and creativity were an expansive field for him to explore," says AXOM director Margot Muto in a provided statement.

Art became "an expression that beat depression and there was no turning back," RANGE says. "Through graffiti art, I am in control of love, pain, joy, pride, failure, and success. It was a way to speak for those who in words alone cannot express their true feelings. I am the visual voice of the ghetto."

Through his imagery, RANGE conveys culture and conflict, beauty and resilience. Two portraits of women drawn in marker on welfare applications, "We'll Be Fine" and "Against All Odds," speak of the artist's resourcefulness as well as his sense of empathy for social strife.

In addition to several canvases filled with the stylishly formed letters of his name and his B-Boy characters, there are canvases of lovingly rendered icons such as Emiliano Zapata, Frida Kahlo, Selena, Marilyn Monroe, and Kat Von D.

Beautiful women are in no short supply in RANGE's work, and they run the gamut from bodacious B-Girls to queens of every shade, shape, and size. During the opening party, I heard more than one viewer insist that RANGE would make some serious loot if he made a t-shirt from his painting, "I Can Be Wonder Woman," which features a full-figured honey rocking the Amazon's attire.

Elsewhere, RANGE provides some pointed social commentary in "The Waiting Game," a painting of a blonde babe showing off her lingerie-clad derriere. The gal is preoccupied with a vision crowded with social media "likes," yet her efforts have so far gone unrewarded.

The work doesn't read as a harsh criticism so much as it is an observation of what can be a pretty futile exercise — we're all hooked on receiving those approval icons. If you follow RANGE on social media, you might have seen a recent post of a dime bag stuffed with Instagram hearts.

In the gallery proper, a grid of dozens of small square canvases includes every expression imaginable with B-Boys, Luchadoras, revolutionaries, players, and celebs. Nearby, a wall-mounted denim jacket, like many other pieces in the show, is a tribute to hip-hop. The back panel is painted with a colorful city scene, a B-Boy in a RUN DMC shirt, and the word "FRESH" emblazoned overhead. This mean-mugging character appears again, painted on a spray can encased in a shadow box and titled "In Case of Emergency."

RANGE humorously references the tools of his trade again in "The Secret Ingredient," a pop portrait of a spray can dressed up as "Adobo graffiti seasoning," an exclusive offering from GOYA.

RANGE is one of the hardest working artists I've ever met. He constantly shares his talents on Rochester's walls and posts progress shots of his studio work almost daily. Every bit of the work in this gallery show is satisfyingly sharp — except for the soft-focus, photo-realist airbrush portraits, which are reach-out-and-touch lush.

Viewers can also peruse a portfolio of RANGE's drawings, which include more celebs, characters, and portraits with socially-conscious commentary, as well as a bit of insight into his process of sketching out his letters.

"When people see my work I'd like them to realize that graffiti art is not only a valid art form, but also a lifeline to someone trying to reach out to the rest of the world," RANGE says.