Once upon a time in the kingdom of Arendelle, there lived two young princesses: Anna (voiced by Livvy Stubenrauch as a child, and Kristen Bell as an adult) and her older sister, Elsa (Eva Bella, and later, Idina Menzel, of "Wicked" fame). Elsa was born with the power to manipulate and create ice and snow, which she loved showing off to delight her sister. But one day while playing, Elsa accidentally injured Anna with her gift. The king and queen's only course of action was to take Anna to be healed by the Troll King (Ciarán Hinds), who successfully revived her, but also erased her memory of the incident (as well as of Elsa's powers). After the accident, the king and queen made Elsa promise to keep her abilities hidden, and never reveal them to anyone. With no recollection of her injury, Anna couldn't understand why her sister had suddenly grown distant and wouldn't play with her anymore, feeling as though she had lost her best friend.

Years pass, and Elsa keeps herself isolated, afraid of the possibility she might hurt someone again. Elsa stays locked in her room and Anna's loneliness grows, until finally, on Elsa's coronation day, she has no choice but to open up the castle once again. But during the ceremony, Elsa accidentally reveals her powers to the kingdom, and when her people react in horror, she flees, retreating to the mountains and leaving Arendelle cloaked in eternal winter. Now knowing her sister's secret, Anna sets out after her sister and bring her back home. Along the way, she recruits an ice salesman, Kristoff (Jonathan Groff, "Spring Awakening"), his reindeer companion, Sven, and an enchanted snowman Elsa created, named Olaf (Josh Gad, "Book of Mormon") to help her find her sister and bring summer back to their kingdom. 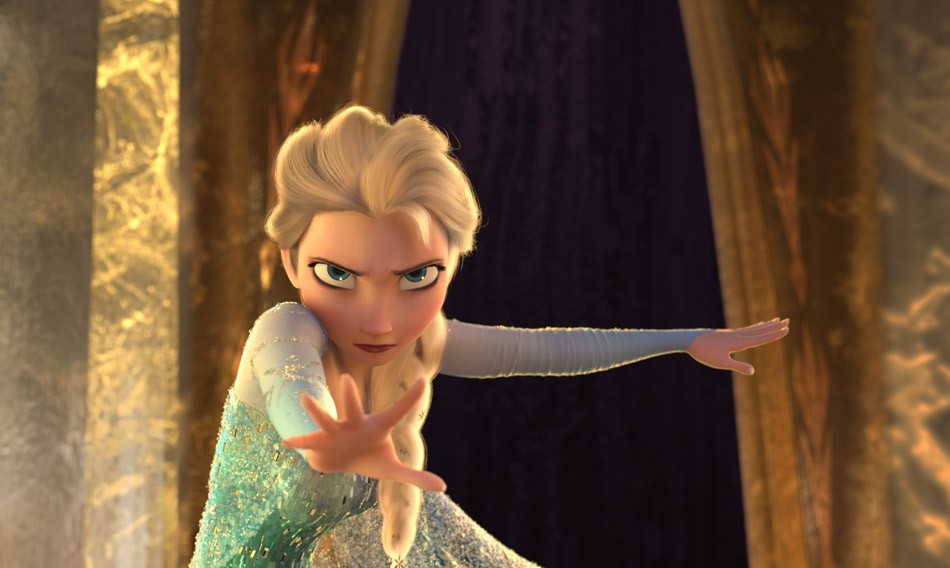 Loosely inspired by Hans Christian Andersen's "The Snow Queen," "Frozen" at first seems like another in the long line of Disney's traditional fairy-tale musicals. But as the story goes on, it turns out to be a little more subversive (well, as subversive as Disney is likely going to get). Directors Chris Buck and Jennifer Lee, working from a story they wrote, along with Shane Morris, place the emphasis squarely on the ladies and build on the groundwork laid by previous Disney entries "Brave" and "Tangled," with their strong, feisty princesses who take action for themselves. The filmmakers are not afraid to poke fun at some of the tropes of Disney princess films, as when several characters make fun of one of the two princess heroines for claiming to have fallen in love at first sight with a handsome prince. But in this story, the princess heads into the action while the prince hangs back home.

"Frozen" consistently bucks expectations, an unexpected surprise when you're talking about a Disney animated movie. Besides the presence of Idina Menzel, there are a number of thematic similarities to "Wicked," most notably the humanizing of what would be the villain in another version of the same story (as Elsa's "Snow Queen" was in the original fairy tale). It's also interesting to see how easily the film could be read as a coming-out story. Elsa's mantra of "conceal, don't feel" regarding her ice powers should resonate with anyone who has been closeted, suppressing something inside of them out of shame and fear. There's the constant emphasis on the idea the Elsa was born with her abilities and not "cursed" with them, plus the fact that one of her first actions following her escape is to experiment with her powers and give herself a makeover. (Incidentally, if a bass-thumpy, dance version of Menzel's big number, "Let It Go," doesn't immediately go into heavy rotation in gay clubs across the country, then someone out there isn't trying hard enough.)

The songs in "Frozen" were written and composed by husband-and-wife team Robert Lopez and Kristen Anderson-Lopez. He's best known for co-writing the songs in Broadway's "Avenue Q" and "Book of Mormon," and the two previously collaborated together for the recent "Winnie the Pooh" movie. Several of their songs here are closer in nature to sung-through stage musicals than traditional Disney tunes, meaning they're not all as immediately catchy. But they're growing on me with each listen.

Kristen Bell injects her unique personality into the other heroic sister, Anna, giving her a charming daffiness that we're not used to seeing in a Disney princess. Menzel makes for a sympathetic Snow Queen, and her considerable pipes are utilized to great effect. Since the directors bothered to cast Broadway vet Jonathan Groff in their musical, you'd think he'd get more than one short song (a funny little ditty called "Reindeer(s) Are Better Than People"), but he's utterly charming in the role. I'll take comfort in the fact that Menzel was cast in Disney's 2007 live-action Disney princess film, "Enchanted," and never sang a note, so if the pattern holds, Groff should get a starring role sometime in the next few years. A little of Josh Gad can go a long way, but he's utilized perfectly here; his animated snowman Olaf is used sparingly enough that his character never starts to grate.

"Frozen" continues the quality of animation in Disney's features: it's absolutely beautiful, with costume and design elements taking inspiration from the story's setting in Norway. Seeing the film in 3D adds an immersive atmosphere, especially the many lovely, enveloping shots of falling snow. I admit to wondering if the theater's air conditioning had suddenly kicked in during some of the film's more blustery scenes.

Though "Frozen" isn't quite up to the level of "Tangled" -- a popular but underrated film that I adored -- its great characters, lively songs, and unique storytelling choices make a worthy addition to the Disney stable.