Red Wings groundskeeper dreams of revealing his field of green

It was 43 degrees at noon under a robin’s egg blue sky when Gene Buonomo climbed aboard his tricked-out Toro Groundmaster to mow the lawn at Frontier Field.

In normal times, the Rochester Red Wings head groundskeeper would have been preparing the field for a six-game homestand beginning with a series against the Columbus Clippers that night.

But with professional baseball on pause because of the coronavirus pandemic, Buonomo was trimming the grass simply because it needed it.

Three acres of Kentucky blue grass was planted during the off-season as part of a $2 million field upgrade to Major League Baseball standards, and the onslaught of rain and the absence of ballplayers trampling the turf had it growing like a weed.

“This’ll be the second time cutting it,” Buonomo said. “It’s in pretty good shape right now. I mean, I think it is. I’d like to get the guys out on it. They’ll tell you how good it is.”

The coronavirus-imposed quarantine has given countless homeowners the time to turn their lawns into the lush, green fields of their dreams. Few know how to grow one like Buonomo, who, at 70, has overseen stadium operations for the Red Wings since 1992.

There is no indignity known to grass that he has not confronted: snow, sleet, rain, cleats, and chewing gum. He knows when to apply fertilizer and how much; how to account for the area’s meteorological mood swings, and how to achieve that perfect shade of green.

If only anyone could see his handiwork now.

“I would venture to guess that our grass is greener than anywhere else in the county right now,” Red Wings General Manager Dan Mason said. “Nobody’s played on it. People have barely even walked on it. It looks awesome.”

Buonomo is squat in stature but moves quickly, like a pinball, and speaks even faster.

He recalls the team’s former general manger, Joe Altobelli, hiring him from the town of Greece, where Buonomo maintained the ballfields, and telling him he’ll learn what it takes to maintain a stadium beyond the grass along the way.

“Which I did,” Buonomo said. “People think all you do is cut grass. There’s a lot of other things. You’ve got the warning track, you got the infield dirt, you got clay, the mound, the home plate. It’s a lot of work.”

And cutting the grass isn’t easy, either, Buonomo will tell you. Inlaying designs, like stripes in the outfield or checkers in the infield, requires flagging the appropriate areas, mowing them twice or more, and rolling the grass at an angle just so.

Carving out a simple design can take hours. A photo of the most intricate pattern Buonomo ever undertook — spelling out “RED WINGS” in giant, capital letters across the outfield — hangs outside his office door as a cautionary tale.

“It took eight days to do that. Eight days! And nobody said a word, so we said, 'To hell with that,' and never did it again,” Buonomo said half indignantly, half laughing it off, which seems to be the way he rolls.

Nearby, a dartboard hangs on a concrete pillar. On the reverse side and speckled with holes was a head shot of Terry Tiffee, who played third base for the Red Wings in the 2000s and whom Buonomo recalled as a notorious nitpicker of field conditions.

“He complained about everything,” Buonomo said, again, half indignantly, half laughing it off. “So we put him on the dartboard.”

Buonomo’s office sits among an assemblage of lawnmowers, tools, bags of grass seed, and baseball paraphernalia under the right field bleachers. Every nut, bolt, and beam in the stadium can be traced back to the sub-bleacher hangar. 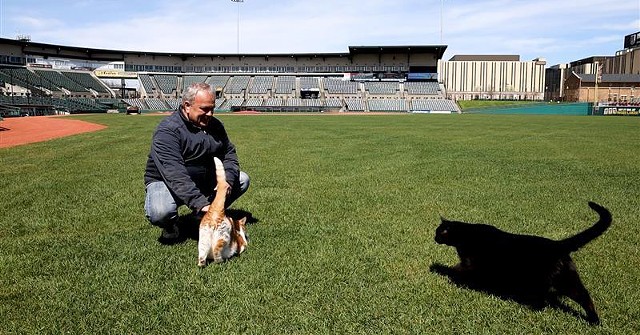 On this day, one of them, Missy, a finicky long-haired feline who literally bites the hand that feeds her, sleeps on a top shelf among bottles of glass cleaner. Another, a mangy-looking thing named Bernissimo, eats from an open can of Fancy Feast on Buonomo’s desk.

“They keep me company,” Buonomo said.

Buonomo, a 1966 graduate of Franklin High School who grew up on Marietta Street not far from the stadium, normally manages a team of 10 people during the season. Right now, though, the grounds crew consists of him and his 36-year-old son, Geno.

Most mornings, Buonomo leaves his Penfield home for the ballpark around 7 a.m. and works until whenever. Depending on the day, that could mean mid-afternoon or midnight.

But he hopped on the lawnmower at Frontier Field that day. 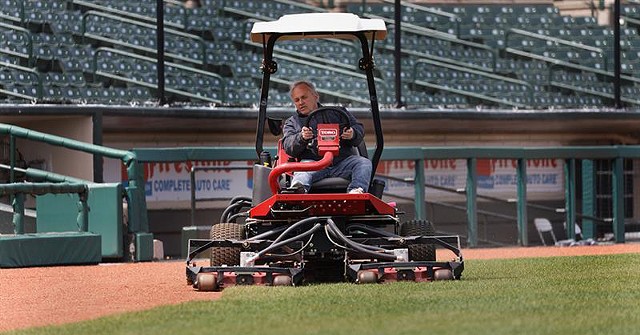 “You’ve got to remember, this grass is just put in,” he said. “We top dress it, put seed in it, make it a little fuller, aerate it, let it breathe.”

“When it’s new it’s like anything else,” he went on. “You gotta break it in.”