From the frozen vine

Rochesterians love to incorporate wine into any season. Wine slushies are a centerpiece of the Lilac Festival, and local companies make it easy to plan robust winery tours in the fall. The frigid winter months, those bring a thick, sweet dessert wine known as ice wine. 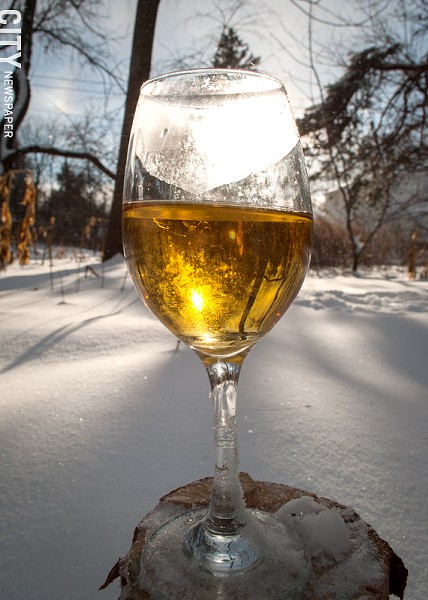 Ice wine is a highly concentrated dessert wine known for its sweet flavor and syrupy mouthfeel. The first recorded ice wine harvest occurred in 19th century Germany, and by the 1960's, "Eiswein" harvests became increasingly common and eventually migrated west. While the Finger Lakes region is already lauded for producing quality wines, it is especially well-positioned to produce ice wine. The region's rich soil grows hearty grapes, and Upstate winters get cold enough to freeze those grapes on the vine. When harvested and processed, these thick, frozen grapes produce the stickiest and sweetest natural ice wines. Winemakers in other regions can artificially mimic the process, but the Finger Lakes area is one of only a few places in the world that it happens organically.

The ice wine trademark is that grapes are left on the vine to freeze before being pressed. Regular harvest grapes are typically picked in the fall between the middle of September and the beginning of November. According to Matt Cassavaugh, head winemaker at Casa Larga Vineyards, this is when he identifies his best ice wine grapes. "We select some of our nicest, healthiest fruit and designate them to stay on the vine until we get the proper picking conditions," Cassavaugh says.

The timing of an ice wine harvest is often determined by Mother Nature. Casa Larga uses 18 degrees Fahrenheit as its benchmark temperature for an ice wine harvest, while Glenora harvests ice wine grapes at 13 degrees Fahrenheit. This allows the grapes to freeze completely solid and remain that way throughout the entire pressing process. "If grapes thaw during pressing, some of the sweetness is lost," DiFrancesco says. A completely frozen grape yields the rich caramel flavor that ice wine connoisseurs expect.

While a similar end product can be made with grapes that are frozen after picking, the term "ice wine" has been reserved for wines that were produced in the traditional method, from grapes that were naturally frozen on the vine. Casa Larga's ice wine series is called "Fiori Delle Stelle," or "flower of the stars," for the cold, clear nights on which the winery harvests its ice wine grapes.

Glenora produced its most recent batch of natural ice wine in 2013, but that hasn't stopped them from producing what DiFrancesco calls "cryogenic" ice wine. These grapes are picked during the normal harvest and are cryogenically frozen before pressing. The process is more artificial, but "the end result is cleaner and more technically perfect," DiFrancesco says. Not to be confused with the naturally-made product, these wines are labeled as "iced wine." This helps regulate pricing, as DiFrancesco says that organically-made ice wine can be sold at a higher price than its artificial counterpart.

While local temperatures and soil conditions may be favorable, the arduous pressing process makes ice wine a rare delicacy. Out of hundreds of Finger Lakes wineries, only a few produce ice wine. Casa Larga uses a special presser that removes excess water from the process. Less water content means quality ice wines with a signature fruity-thick taste. "The hallmark of ice wine is concentration," Cassavaugh says. "Concentrated sugars, acidity, flavors, and aromas create a precision and focus that really demonstrate the true qualities of a grape."

Locally made ice wines can be purchased at area liquor stores such as Lisa's Liquor Barn, Marketview Liquor, and Century Liquor; as well as on winery websites and in person at tasting rooms. In addition to Casa Larga and Glenora, other area wineries that produce this delicacy include Inspire Moore (197 Main Street, Naples); Knapp Winery (2770 County Road 128, Romulus); and Standing Stone Vineyards (9934 NY-414, Hector).

Casa Larga makes a full celebration out of the ice wine season. Since 1998, the vineyard has held an annual ice wine festival to celebrate the harvest and its product. Over the years, the festival has expanded to include a culinary component and a myriad of other offerings including seminars; wine and craft beer tastings; an ice wine luge; and horse-drawn carriage rides. This year, the New York Ice Wine & Culinary Festival will take place on Saturday, February 24, from 11 a.m. to 6 p.m., at Casa Larga Vineyards (2287 Turk Hill Road, Fairport).

"We are extremely lucky to work in a region where ice wine production is even a possibility," Cassavaugh said. "There aren't many regions that have a warm enough growing season to ripen grapes during the summer and fall, and then consistently cold enough winter temperatures to freeze those grapes on the vine."