From sleigh ride to slay ride

The weirder, crazier, and goofier side of holiday music 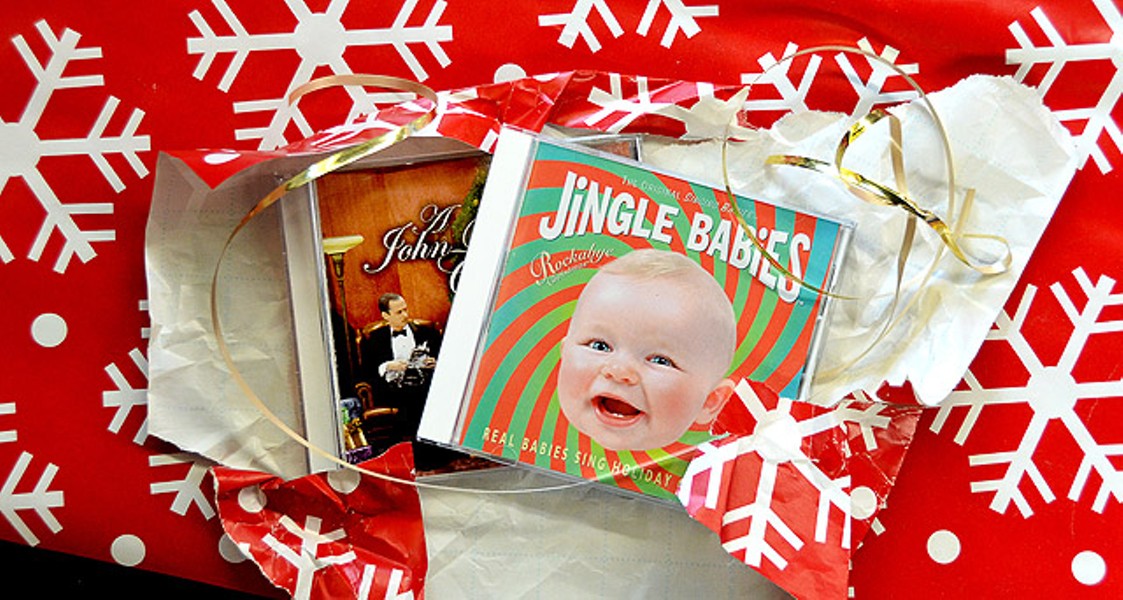 There's no surer sign that the holiday season is upon us than the inescapable barrage of popular Christmas music saturating the airwaves. The worst part isn't that most of the songs sound the same (artists often seem afraid to mess with what's already proven successful), but that the end product inevitably feels...safe. And boring. Once you've heard one warbling rendition of "Winter Wonderland," you've heard them all.

There is comfort to be found in tradition. But there's something a little invigorating about hearing someone try something completely different, even if "different" is just a nice way of saying "batshit insane." Weird is often underrated, and terrible is infinitely better than mundane.

With that in mind, here is a brief list of suggested Yuletide listening for those who like their holidays on the unconventional side. There's something here for everyone, from geek to drag queen, and any one of these albums are just the thing to give your seasonal playlists a little kick in the pants this year.

The Sultan of Sleaze serves as curator for this collection of yuletide kitsch, filled with obscure novelty songs like "Little Mary Christmas" by Roger Christian. It's a maudlin little ditty about an orphan girl who won't let being passed over for adoption year after year dampen her spirits. There's also "Santa Claus is a Black Man," performed by AKIM and the Teddy Vann Production Company, which is, well, pretty self-explanatory. There's no better way to prepare yourself for when The King of Bad Taste himself brings his one-man show of the same name to Rochester on December 16. (For more information or to purchase tickets check imageout.org.)

To be perfectly honest, when I first stumbled across this album, I wasn't entirely sure whether it was a parody by someone looking to combine the two most diametrically opposed genres out there — holiday music and death metal — or something meant to be taken in earnest. But either way, the result is holiday bliss. Screaming along to tracks like "Death Rest Ye, Merry Gentlemen" tells me there's no better way of getting out a bit of that holiday aggression than this.

For the gamer in all of us, Doctor Octoroc's chip-tune music is a pixilated treasure trove of holiday classics reinterpreted as outtakes from the soundtrack to your favorite classic video games. It's perfect for scoring your quest to grandma's house, swashbuckling demon in-laws, and picking up a healing potion of eggnog along the way. Best of all, none of the tracks run longer than two minutes in length, so the album never wears out its welcome.

"Christmas in the Heart," Bob Dylan

There are some artists that, no matter how talented or respected, just aren't the right fit for Christmas. Listening to Dylan croak his way though classics like "Silver Bells" and "Here Comes Santa Claus," it's clear that the whole endeavor is woefully misguided. Still, the singer's distinctive rasp contrasted against nostalgic arrangements and an über-cheerful chorus of backup singers makes for an entertaining listen. The highlight is, without a doubt, "I'll Be Home For Christmas," which in Dylan's hands seems more like a threat than anything else.

The hilariously unimaginative title sets the right tone for this album of dreadful, kid-friendly hip-hop Christmas tunes, complete with lyrics about donning our fly apparel and riding in a blinged-out Christmas sleigh. So sublimely terrible that it wraps back around to amazing.

Holiday music has a tendency to paint the process of going home for the holidays with a rosy glow. Maybe there are people out there who just can't wait to go through the chaos of holiday travel so they can spend time with their crazy families, but I sure don't know any of them. For those of us who welcome a little realism in our carols, this collection of toe-tappingly sardonic country ditties is the perfect antidote to the usual Christmas standards. With titles like "Dysfunctional Family Holidays" and "Another White Trash Christmas," it's bound to appeal to the bitter cynic in us all.

"Oy to the World," The Klezmonauts

Who knew that all those dusty old carols needed was a good kick in the tuchus, courtesy of some jaunty clarinet playing? Without a doubt the most replay-worthy album on this list, it's the perfect denomination-bridging soundtrack for your annual Chrismukkah celebration.

Tap into your inner glamazon with this gleefully risqué album, which could almost pass for a product by any number of popular 90's-era R&B artists were it not for a healthy dose of RuPaul's tongue-in-cheek humor on tracks like "All I Want For Christmas," which substitutes the original's sappy declarations of love with a lengthy wish list of plastic surgery procedures, and "I Saw Daddy Kissing Santa Claus." Shante, you stay.

Has there ever been an instrument with less potential to be taken seriously than the kazoo? It's a well-known fact that adding kazoo to your music instantly ups the silliness quotient by at least 80 percent, and therein lies the charm of this album. I dare you to listen to the melodic buzzing of "O Christmas Tree" and not giggle like a 5-year-old.

A festively nightmarish sonic hellscape featuring recordings of wailing and cooing babies set to the tune of your favorite Christmas classics. I eagerly await the day some enterprising young filmmaker discovers this album and decides to use it as the score to an avant-garde horror film. Absolutely chilling.

Listen to a track from each album with our mix on 8tracks! Click above to listen!