From Nancy, with love 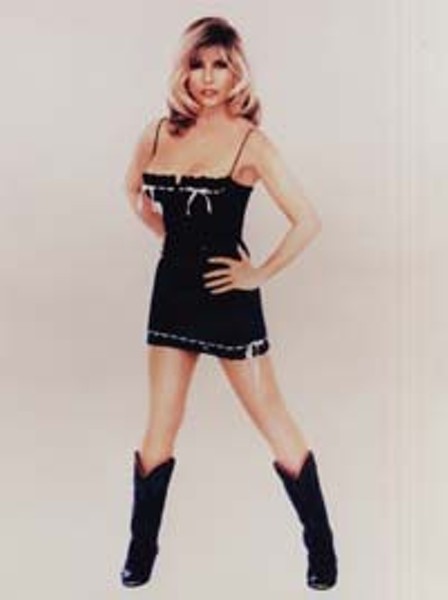 As rock 'n' roll's swagger staggers under the weight of its disproportionate masculinity (you know, too many dudes), women with the appropriate stance and guts are keeping it somehow viable, visceral, and real. It's still a man's world, but women like The Breeder's Kim Deal, Sonic Youth's Kim Gordon, Deborah Harry, or yes, even Madonna have managed to wrestle the music biz's reins in their favor.

It's a feat that would be much more difficult --- if not impossible --- if it weren't for Nancy Sinatra. Her cute gal-tough chick stance, with her sensual, sultry vocal style and no-nonsense demeanor, set the tone for a generation.

Sinatra's 1966 number one hit, These Boots Were Made For Walkin', was a song of empowerment and independence --- still is. She's had roles in seven movies, including starring roles in Speedway with Elvis Presley and The Wild Angels with Peter Fonda.

With a string of 21 additional charted hits, her influence as an artist is immense.

"I'm just now becoming aware of it," she says into her California phone. "It's very humbling to meet young women who credit me with their start in the music business."

Sinatra made the scene in the early 1960s. And though she had a little help from her father's Reprise Records, she persevered solamente. Having a famous dad wasn't necessarily a plus.

"It doesn't really help," she says. "It works against you a lot."

Sinatra's singing style --- her phrasing in particular --- is definitely similar to that of her late father. Her turn of a phrase, the way she sings casually unaffected and nonchalant is mucho sexy, cool in the extreme. This, despite her mini-skirted, go-go booted image, is in my opinion what makes her such a credible and important musician. And the point is proven by her fans.

"It's really a fascinating study in people and in music," she says "The fact that the music just seems to overcome all barriers, age particularly."

"We get all ages," she continues. "Kids with pierced noses and eyebrows and guys in golf pants. I get Vietnam veterans a lot and I get white-haired old ladies who were bobbysoxers and are there because they loved my father."

"What I notice most about each audience is that they all know the words to the songs. It's really funny. It's all very, very sweet. It's all very loving and it's almost a throwback to a love-in in a way."

Sinatra's love in particular has manifested in her tireless charity work. She toured Vietnam with The USO (and was a popular pinup with the GI's) during the war. She continues to support veterans stateside by participating in annual events like Rolling Thunder in Washington, DC, which honors and remembers POW's and MIA's.

She is also involved with Jerry Lewis' annual telethon and Songs Of Love, an organization that creates original, personalized songs for terminally ill children. Sinatra has donated countless pairs of boots to charity auctions as well.

And with renewed hostilities in the Middle East, Sinatra was ready to go again. She performed a USO concert at the Hollywood Bowl, opening for the boobs and teeth known collectively as Jessica Simpson. But overseas wasn't offered.

"The USO doesn't want me," she says. "You know, I volunteered to go to Afghanistan and later when the Iraqi war began I volunteered my services and they weren't interested. I guess they only want young, gorgeous girls." This coming from a woman whose beauty belies her 63 years.

And there are plenty who want Nancy Sinatra.

Director Quentin Tarantino chose her cover of "Bang Bang (My Baby Shot Me Down)" as the opening credit theme for Kill Bill Volume I.

Her upcoming CD, To Nancy With Love, is an all-star collaboration with artists like Morrissey, Jarvis Cocker, Jon Spencer, Elvis Costello, and Bono.

"Morrissey sent me his song that he wanted me to record," she says. "And that's really how it started." The album even includes some unfinished Sinatra business.

"Bono had written a song for my dad that my dad couldn't sing," she says. "He wasn't recording when he heard it and then of course it was just too late. So I asked Bono if I could do it instead. He sent me his track and I put my vocal on it. It was very sweet of him to do that."