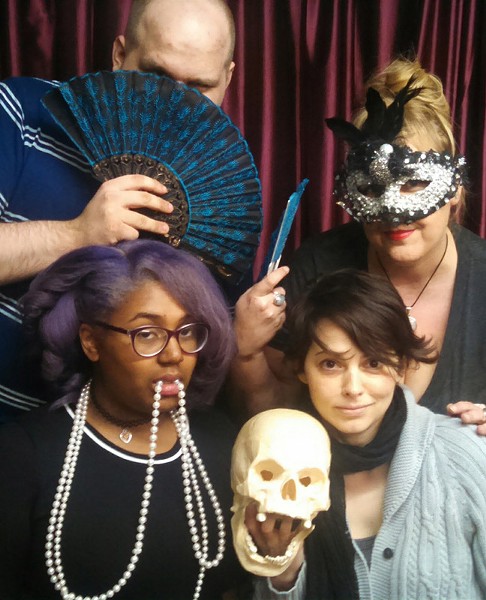 PHOTO COURTESY FIRST NIAGARA ROCHESTER FRINGE FESTIVAL "The Ghost at the Feast" is one of six prominent performances at this years Fringe that will riff on the works of The Bard.

Shakespeare's plays are timeless, and you just can't have a theater-heavy festival without Will's work. Fringe is featuring no fewer than six shows based on the Bard's plays. Here's a little guide to the something-for-everyone lineup.

Bring your rain poncho, because METHOD MACHINE is bringing the blood. Featuring excerpts of the Bard's goriest plays, "ShakesBLOOD" manifests what is usually left to audience's imaginations. The irreverent, 45-minute show includes notorious scenes from "Titus Andronicus," "Caesar," "King Lear," and more, led by Macbeth, Lady Macbeth, and the Weird Sisters. See it at Abilene (153 Liberty Pole Way) on either Saturday, September 19, or Saturday, September 26, at 8 p.m. Tickets are $10, $13 for under 21 (includes cover). The show is open for ages 13 and up.

In a madcap, interactive twist on the world's most famous star-crossed lovers, Madness Most Discreet Theatre will present "The R & J Project." At the top of each (minimally rehearsed) 75-minute show, the audience is asked to determine which of the four actors will play each of the 11 characters. The fun takes place at Blackfriars Theatre (795 East Main Street) on Sunday, September 20, at 8 p.m., and again on Tuesday, September 22, at 5 p.m. Tickets are $15.

In "Shakespeare's Greatest Hits Vol. 2: 50,000,000 Jacobeans Can't Be Wrong," five players portray every speaking character in every scene in "Macbeth" and "The Tempest." This all ages, 50-minute show is Shakespeare on speed. Check it out at MuCCC (142 Atlantic Avenue) on Monday, September 21, at 7 p.m. Tickets are only $5.

Recommended for mature audiences, "The Ghost at the Feast" promises a "bawdy and bold interpretation of the banquet scene from Macbeth." In addition to heart-racing tension, it also promises sensuality, ladies sword fighting, and -- Shakespearian purists beware -- a smattering of confusion that will have Dadaists weeping with joy. The 45 minute show will take place at MuCCC (142 Atlantic Avenue) on Thursday, September 24, at 7 p.m. Tickets are $10.

Something's rotten in the state of Denmark, and it might be Lady Gaga's meat dress. In "HamletGhosts," director Cody Holliday Haefner reconstructs Hamlet for a modern audience, through a series of vignettes mixing pop stars, Yahoo Answers, and personal narratives. If you're as much of a Shakespeare virgin as Ophelia (you won't get that), fear not, the 90-minute show features "the guts of Hamlet without any of the plot." Find out what that means by heading to the TheatreROCS Stage (321 East Broad Street) on Friday, September 25, at 10:30 p.m., and Saturday, September 26, at 2 p.m. or 9 p.m. Tickets are $15. The show is recommended for ages 13 and up.

With no specifically set performance times, "Pop-Up Shakespeare" will be serendipitously experienced by those in the right place at the right time. The right place is the Spiegelgarden, and the right time is when the mood strikes the micro-sized flash mob that is the Shakespeare Players (a program of the Rochester Community Players). The actors will present short, street theater performances of famous Shakespearean scenes. This show is of course free.