Fringe Festival's Speigeltent is now smellier — in a good way 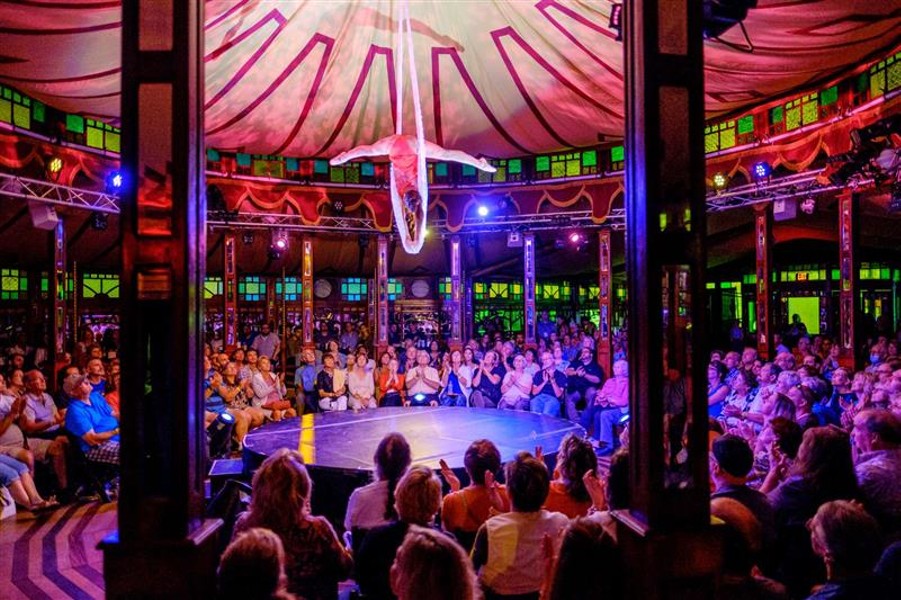 PHOTO BY ERICH CAMPING FOR ROCHESTER FRINGE FESTIVAL The Cristal Palace Spiegeltent, located at Main and Gibbs streets, is the prime entertainment venue of the Rochester Fringe Festival.
Beer. Wine. Sweat. A potpourri of perfume. Damp canvas. A touch of wood. Windex.

That can be the smell of the Cristal Palace Spiegeltent — the mahogany and mirrored traveling pavilion that is the prime entertainment venue for the Rochester Fringe Festival at Main and Gibbs streets — after a night of performances and parties.

“After a disco that goes for while it’s a combination of wine and beer and just, you know, smells,” said the festival’s producer, Erica Fee.

So Fee this year took a cue from Las Vegas casinos and high-end spas and arranged to scent the tent with a personalized fragrance intended to accentuate the festival’s brand, offset unpleasant odors, and keep patrons and performers partying.

The spiegeltent now has its own spiegelscent.

The scent is called “Book Store” and, according to its manufacturer, the Las Vegas-based custom fragrance company Aroma Retail, is a “sophisticated experience of paper pulp and leather” that evokes “childhood memories of old classics sitting on your grandfather’s shelf” and “simpler days.”

“I was trying to find some sort of scent that transported an attendee but I wanted to play into that wood and oak and club-like venue,” Fee said. “At first I thought I would do fresh scents, but the fresh scents seemed a little too yoga studio.”

Scentscaping has been a thing in hotels, resorts, and retail outlets for years. Some of the cutting-edge methods for perfuming large rooms involves piping in perfume through the HVAC system.

More recently, scentscaping has entered the wedding and home spheres. Adding a scent can create the illusion of having more flowers or transporting guests to a tropical beach or a rural countryside.

“The combination of smells that you experience can be linked by your brain to the experience itself, giving you a very strong connection between that smell, your feelings, and the memory of that place,” said Julian Meeks, an associate professor of neuroscience at the University of Rochester, who studies the olfactory system and how smell influences social behavior.

“If you are able to impress upon a fairgoer that there’s a unique and pleasant smell associated with the space and the event, that is likely to be something that influences the person’s experience,” Meeks said.

It is for the same reason that real estate agents suggest home sellers bake cookies in the kitchen before showing their home. For many prospective buyers, the smell is associated with family, comfort, and good times.

In 2018, Meghan Markle reportedly wanted to scent St. George’s Chapel at Windsor Castle to mask the chapel’s musty odor. Buckingham Palace apparently denied the move, but allowed diffusers to be strategically placed around the chapel.

The Fringe Festival intends to make similar use of diffusers in the spiegeltent. Fee estimated the cost of scenting the tent to be several hundred dollars.

Fee said she was aware of the scentscaping trend, but was inspired to perfume the spiegeltent by an exchange she had with a festivalgoer in 2019. That was the last year the festival erected a traditional spiegeltent, whose origins are in Belgium, where spiegeltents were first used as traveling music halls. The space takes its name from the Flemish for “mirror tent.” 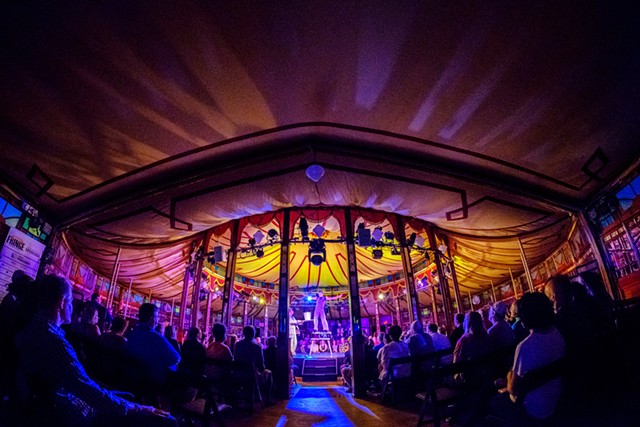 “I did have a patron come to me and say, ‘Wow, how did you make this smell like Belgium?’” Fee recalled. “I thought, ‘I don’t know that we did that, but I’ll take the credit for it.’ I just gave some sort of non-answer and immediately thought, ‘Does it smell like french fries and mayonnaise in here? What is going on?’”

It might have. During the course of a typical 12-day festival, the spiegeltent hosts nearly two dozen shows and several receptions. That's a lot of beer, wine, perfume, and Windex.

Some 7,200 people are expected to spend time inside this year catching shows and rubbing elbows. Many will be close enough to the action to see the spit flying and perspiration dripping from the performers.

But they won’t be able to smell them if the spiegelscent does its job.

“Hopefully, this idea will work because we’re also going to be airing out the tent for health purposes because we have more than one respiratory illness going around,” Fee said. “But we think that this will add to the experience.”

David Andreatta is CITY's editor. He can be  reached at dandreatta@wxxi.org.