Fringe Festival Day 3 and a full bill of dance and theater for me: Garth Fagan Dance, FuturePointe Dance and PUSH Physical Theatre. Three hard-hitting local biggies. Each so much its own entity that seeing them all in one evening was like reading three good novels back to back to back. How can you digest each fully? Still, juxtaposition can contribute to keener distillation of observation.

After seeing Garth Fagan Dance perform I caught FuturPointe's"Psychopomp & Pageantry" at Geva'sNextstage. There are direct connections between the companies; Guy Thorne, co-founder of FuturePointe, and Heather Roffe, one of its three directors, both had their stints dancing with Fagan. I found myself forgoing note taking at "Psychopomp," laughing aloud in delight, tapping my foot, totally immersed in the performance. I realized I was in for a treat when the dancers began moving to the distinctive strains of They Might Be Giants' "Istanbul (Not Constantinople)." This was going to be FUN.

Roffe is an accomplished choreographer, and her piece "Byzantium" flooded the stage with upbeat, sultry moves that kept the good-sized audience rapt in attention. The dancers wore a variety of bright paisley and African-patterned costumes, the men bare-chested. I wasn't complaining.

Voice-overs, video, and even a magician of sorts, Nickle Van Wormer (he's dubbed a "mentalist" in the program; nice), contributed to a smorgasbord of sensations. It was difficult to decide whether to focus on Van Wormer supposedly sawing through a woman in his magic box or to remain intent on the dancers. In any case, I enjoyed being immersed in all of it.

Much of the dancing had a very primal, driving energy. This was especially true of the duet between Thorne and his wife and fellow co-founder, N'Jelle Gage, in "Kwekwe," choreographed by Dr. L'Antoinette Stine, a mentor of the two. Thorne was clad in only a shimmery loincloth; you could see all the muscles working in his highly-defined torso. Gage wore a thin beige bodysuit, showcasing a body that possesses both a child-like slightness and the sensuality of a strong, self-possessed woman.

The image of Gage and Thorne together was, for me, rivaled only by the hard-hitting "Midwife to the Dying," in which apprentice Brittany Lang comes to her fate in a ritualistic scene in which Liam Knighten first dropped a transparent scarf across her face as she laid on a bench, then secured it around her head. Lang then entangled herself in scarves and was finally pulled by the women off stage in a somewhat disturbing sequence tinged with a touch of hysterical movement and drumming that hit me in the gut with its power. Wow. 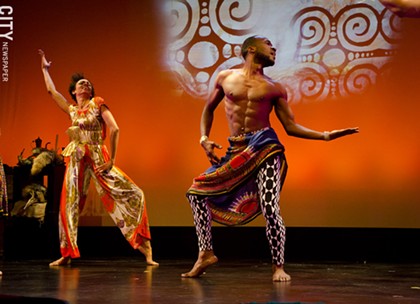 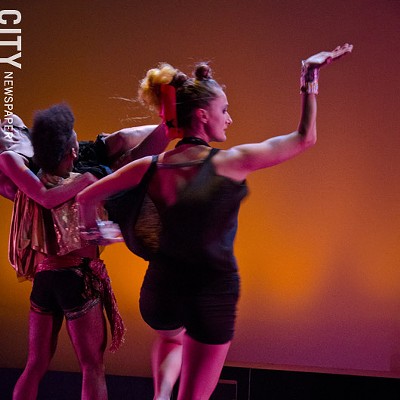 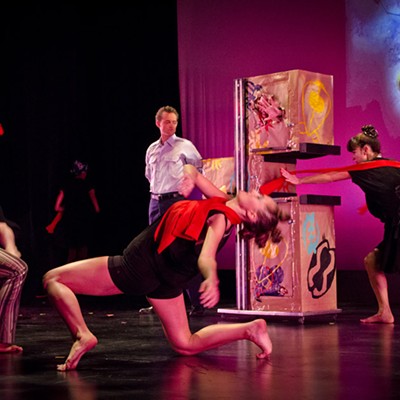 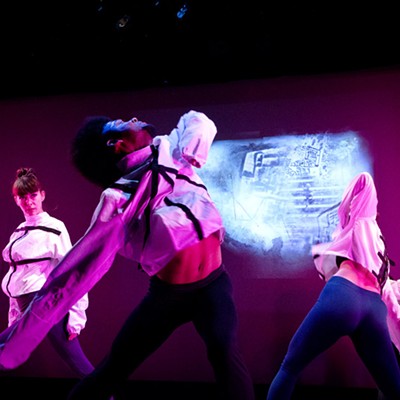 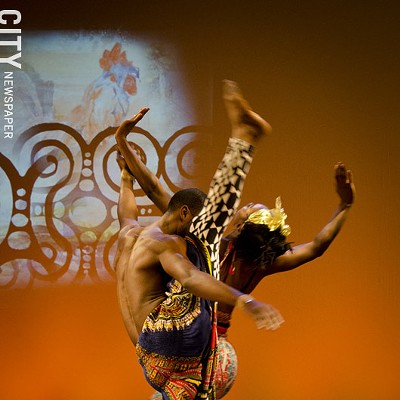 PUSH Physical Theatre is always a crowd-pleaser, and Saturday afternoon's performance was no exception. The house at Kilbourn Hall was packed and the audience rose to its feet in a wave at the end, a standing ovation that -- while the show was great -- I'm not sure was fully merited. As always, the production was entertaining, clever, highly skillful, and, at times, hilarious. But it wasn't the best performance I've ever seen the troupe give.

I felt that the first piece, "Red Ball," was the weakest of all the PUSH offerings and I wondered why the group opened with it. There was little movement; this one was definitely on the theater side of dance theater. It centered around a glowing red orb of light and a tablet or laptop that would, for instance, display a video of a company member's startled face as it was held over their real face which then "disappeared." There was one magical moment in it for me, during a touching scene in which Darren Stevenson -- co-founder of the company along with his wife, Heather Stevenson -- playfully tried to catch the little red light orb which had escaped, mischievously avoiding capture. Stevenson is a brilliant mime and his theatrical presence is huge.

I love both "Grace" and "The Soldier (or A Child's Bedroom)," pieces that, for me, complement each other and were indeed performed back-to-back. "Grace" features Heather Stevenson and is set to "Amazing Grace" by Five Blind Boys of Alabama. Stevenson is airborne, carried aloft by four male company members, for nearly the entire piece. The men transport her worshipfully, alternatively propelling her upwards and restraining her from over-reaching as she strives to attain something just beyond her grasp. Lovely and moving.

"The Soldier" tells a far different story. Darren Stevenson is riveting as a child playing a soldier. He mimes aiming and firing a rifle, lobbing a bomb, dropping to the ground for cover and so on. However, the playing becomes more and more actualized until his mouth stretches open in a silent agonized scream and his body recoils in slow motion from the force of firing his weapon. Finally, he's hit and, seemingly muscle by muscle, he collapses, flails, twitches, and is still. I can't imagine the research and practice that went into that sequence of movements. He must have dissected it second by second, like a series of projected images on film. I only wish my little boys had been there to see the horror on his face, both as he killed and was killed.

"Parenthood" and PUSH's recently premiered work "Job" rounded out the program. If you have ever cared for an infant during the night, "Parenthood" will have you clutching your stomach in laughter. It's that good. "Job," on the other hand, is more serious stuff. The biblical story is transposed to a modern office setting, but the suffering is just as intense. Speaking of which, even with a broken toe, Ari Pryntz-Nadworny excelled as the title character, the anguish and frustration in his expressions and movements as apparent as if he had spoken lines of dialogue. He performs on the cyr wheel for this piece -- a huge, heavy, steel ring which is propelled by the performer's strength and weight, usually from a spread-eagled position within the wheel. It does not look easy.