Fringe Fest 2013 Reviews: "Not Wallace Stevens," "All Your Questions Answered"

PHOTO BY MATT DETURCK The cast of "All Your Questions Answered," now on stage at Geva Theatre Nexstage.

According to Just Poets member Roy Bent, the group titled its Fringe Festival program of original poetry “Not Wallace Stevens” because while Stevens is undeniably a great poet, he’s one who’s “good on the page, but not on the stage.” It’s a characteristic endemic to poetry as a whole, and their group hopes to change that by taking a hint from other art forms that have evolved over the years through the use of technology in order to become more enticing to modern audiences. I’m not sure the show was entirely successful in that regard (it very much resembled a traditional poetry reading), but there were some good poems to be heard nonetheless.

The group’s plan for spicing up the poetry consisted of a projected slideshow of stock images (one image to represent each poem) and live music provided by guitarists Bob Vosteen and Melvin Henderson. The slideshow didn’t add much, as I mostly found myself watching the readers and ignoring the images entirely. While I expected Vosteen and Henderson to play along with the readings, instead they only provided accompaniment as reader Celeste Schantz sang bluesy covers of “Summer Wind” and “Love Me Like a Man.” Schantz has a pleasant voice, but the songs seemed out of place amongst the original poetry that made up the majority of the program. The highlight of the afternoon was Colleen Powderly’s reading of her poem “Twice,” a bittersweet ode to the loves of her life. Maybe that was Just Poets real strategy: the addition of extraneous elements highlighted the fact that the poetry was the real star of the show.

Slideshow "All Your Questions Answered" at Rochester Fringe 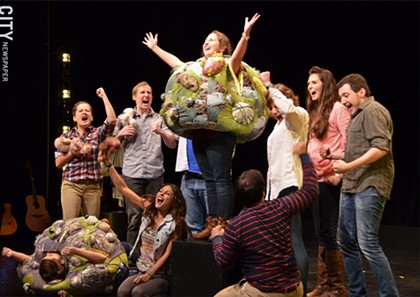 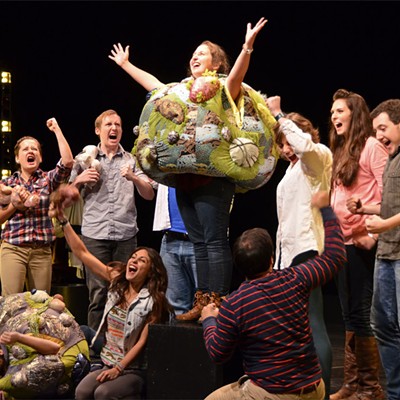 It seems entirely likely that audiences for “All Your Questions Answered” at the Geva Theatre Nextstage will leave the theater with more questions than when they entered. Namely: “What the hell did I just see?” and “What kind of demented nutcase is Greg Kotis exactly?”

An evening of short comedic skits and musical numbers written by the Tony Award-winning creator of “Urinetown,” the show can only be described as: Non. Stop. Bananas. Covering scenes that range from a call-to-arms amongst refrigerator mold that’s positively Shakespearean, to a warning about the potentially dangerous side to that fresh baby smell, the show is made for theatergoers with a twisted sense of humor. And I’d count myself amongst that group.

This is a production of the Geva Theatre Conservatory, which allows young local theater talent to work with professionals in the business. All 10 members of the cast were fantastic in a wide range of bizarre and over-the-top roles. I bet this show was an absolute blast to create. I particularly enjoyed Stella Kammel and John Cummings in a series of recurring skits involving… well, you’ll just have to watch the show to see how they connect. Somewhat frustratingly, I had to consult the website to find the names of specific cast members after asking at Geva’s info desk proved unhelpful. The person I talked to made it very clear that they were not involved with the production, and frankly seemed put out that I’d even asked.

The show is definitely a little rough around the edges, but I found that only added to its charms. If you desire layers and deeper meaning from your theater, you can find it in philosophical discussions of whether audiences truly exist, or you can even ask Kotis himself, during a post-show discussion (during the show, naturally) which involves a live telephone call to Greg Kotis to answer exactly two questions from the audience. But mostly, “All Your Questions Answered” is just great, silly fun.