All I knew about Hiroya Tsukamoto before seeing him play Fringe Fest at Bernunzio’s Thursday was that he’s from Japan, plays guitar, and he played Jazz Fest this year. Of course his appearance at Jazz Fest had to be during the only summer I’ve spent outside of Rochester, so I didn’t get the chance to see him. His style can be described as a blend of folk, jazz, and world music, so I really didn’t know what to expect (and if anyone knew what to expect from a description like that, pat yourself on the back). What I didn’t expect, though, was to witness one of the best live guitar performances of my young life. But that’s exactly what happened.

Tsukamoto took the stage to a crowd of only about 40 people, playing an hour-long set with a “VH1 Storytellers”-esque kind of vibe. Before most songs he would take a moment to tell the tale of the song’s origin, making the already intimate show seem that much more so. While he sang in his native tongue, in some cases he would read the translated lyrics for the crowd before he played the song, a gesture that was much appreciated. 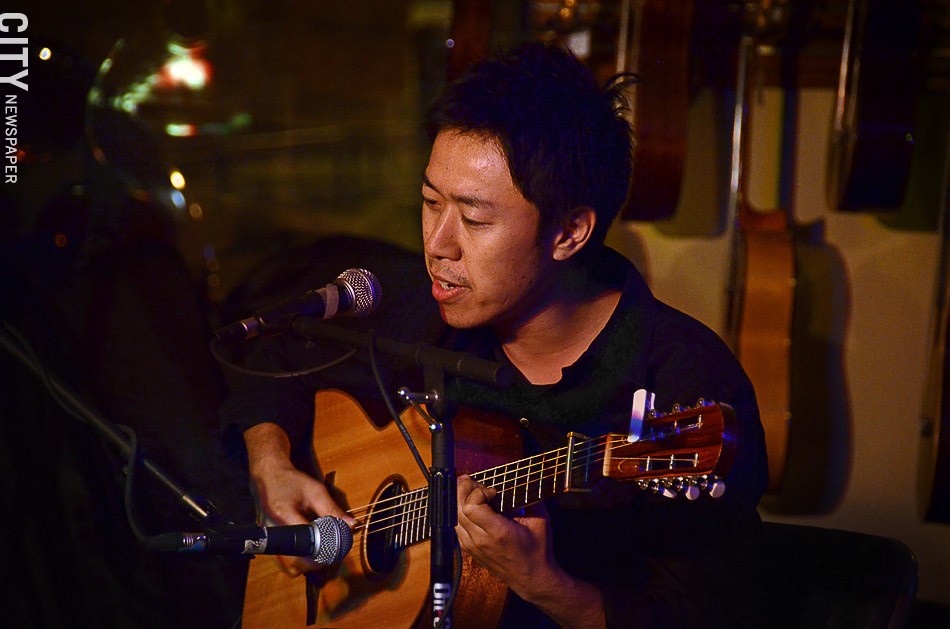 In terms of musicianship, Tsukamoto’s guitar work was just ridiculous. Right from the beginning of his first song, it was obvious that the folks in Bernunzio’s were in for a treat. His brand of fingerstyle guitar is so intricate, and so blazingly fast at the same time, I kept imagining how many clones I would need to make of myself to accurately replicate his sound. There were times it sounded as if there were two or three guitars playing simultaneously One song that drove that point home was his set opener, “From Coast to Coast,” a song that had some of the fastest harmonic runs I’ve heard.

The two other standouts, at least in my mind, were “Black Mountain” and “Durango,” both of which were written about parts of Colorado. These songs didn’t have any lyrics to them; Tsukamoto just sort of hummed a melody behind his guitar. But they didn’t need lyrics to tell a story.

While it was a truly incredible concert, there was one giant letdown: Tuskamoto didn’t play an encore. He did however stand around and talked with anyone who wanted to do so, and that made the whole experience 100 times cooler.

I had big expectations even before My Plastic Sun took the stage Thursday night at Bernunzio’s. I’d never seen the band before, but had read the comparisons to Radiohead, Coldplay, and -- one that makes me cringe -- The Beatles. I cringe for the mere fact that only one time have I read about a band likened to The Beatles where those similarities actually rang true (that would be Australian indie rockers Tame Impala).

After just a few songs, I was seeing elements of not only the aforementioned bands, but also a few others. Wilco was one that came to mind. Once you hear lead singer Johnny Cumming’s vocals, it’s easy to get the Radiohead references. If you closed your eyes while he was singing, you may have been tricked into thinking he was Thom Yorke himself. There were other songs where the rest of the band’s backing vocals produced harmonies a la The Fab Four. While it’s easy to make a smorgasbord of comparisons, My Plastic Sun summons just the right amount of elements from those other bands to make its own unique sound.

The presence of Cumming’s synth riffs along with Sam Snyder’s crying guitar made for an ambient sound. Snyder’s guitar playing is a show in itself, as he brings his arm over the top of the neck to fret instead of going underneath. He did mostly chord work, but the few solos he played were something to see. Of course, you can’t discount the drum work of Roy Stein, who used a mix of normal drums and electronic drums, and also Kyle Vock’s driving bass lines. The instrumentals came together well, and there was never a time where anything was overpowering.

The main highlights from the show for me were “We Run from No One” and “Falling Awake,” as I had to restrain myself from attempting to dance. It wasn’t hard to understand why “We Run from No One” is gaining popularity on the radio down in the hipster-friendly Southwest.