Squeezing six cellos and a drum set (along with the musicians playing them) into the small music area at Java’s Cafe on Gibbs Street was quite a feat - one that, had it not been accomplished once already this festival, I wouldn’t have believed possible. As it was, the process of making it happen resulted in the performance of “Cello Show” starting 30 minutes late Thursday night. The group, made up entirely of Eastman School students, went on to perform an hour set of original music written by the group’s leader, Audrey Q. Snyder, along with a few covers sprinkled throughout. In addition to playing cello, Snyder also provided vocals.

Despite the group’s pop sensibilities (covers ranged from Mariah Carey to the somewhat indie-er Jukebox the Ghost), I’m not sure Java’s was the best venue for this act: some of the nuance of the instruments was lost in the general din of the cafe. Snyder’s tentative singing didn’t help matters -- she was clearly more comfortable on her cello than she was on the microphone. Still, what could be heard was perfectly enjoyable. Snyder won me over completely when she followed a cover of Kimbra’s “Cameo Lover” with an original composition, dubbed “The Buffy Song,” an ode to “Buffy the Vampire Slayer.” But my favorite piece of the evening was a semi-improvised, Middle Eastern-influenced piece that came at the center of the show. “Cello Show” showed promise, but next time I’d definitely try to see act in a quieter setting.

As the audience for Mark Gindick’s“Wing-Man” enters Geva’sNextstagetheater, they’re greeted with the sight of Gindick’sFacebook page projected onscreen. The artist encourages audience members to send him a friend request and interact with him online in the 30 minutes or so before each show begins. The crowd at Thursday night’s opening performance seemed to get a big kick out of seeing their names pop up on his page as he responded to each of their messages. Sadly, I didn’t get to try it out, as I still live in the Dark Ages with only an aging flip phone in my pocket. 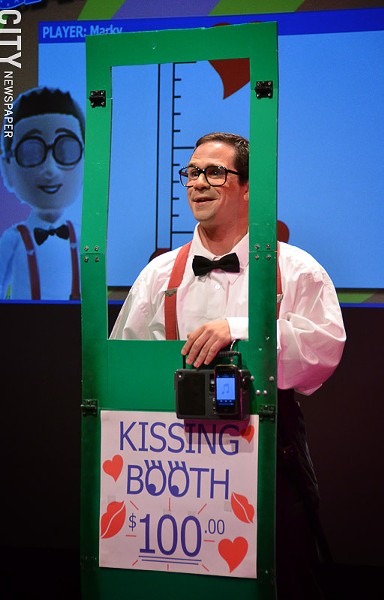 This introduction sets the stage for the performer’s hilarious, episodic exploration of love, dating, and social media (with a focus on Facebook specifically). Having honed his talents as a clown in the Big Apple Circus, Gindick is a gifted physical comedian, clearly influenced by the likes of Charlie Chaplin and the Marx Brothers. Like Chaplin, he performs without uttering a single spoken word (until the very end of the show). Also like Chaplin, Gindick’s humor comes with a hint of melancholy. But for the most part, the laughs in “Wing-Man” come fast and furious, as the lovably nerdy clown giddily romances a balloon and attempts to entice females to join him onstage. In my review of “Cirque du Fringe,” I mentioned the remarkably game audience participants. Well, they had nothing on the two audience members who got pulled up on stage during this performance.

The show isn’t perfect, however. A couple of the bits seemed to go on just a hair too long, and with such a heavy emphasis on the social-media aspect of the show, I found myself wishing that the projected visual display was a little more polished. I wanted the Facebook effect to be a little more seamless, especially after watching those interactions with an actual Facebook page at the start of the show. But that’s admittedly nitpicky criticism, as they were perfectly serviceable and accomplished exactly what they needed to. 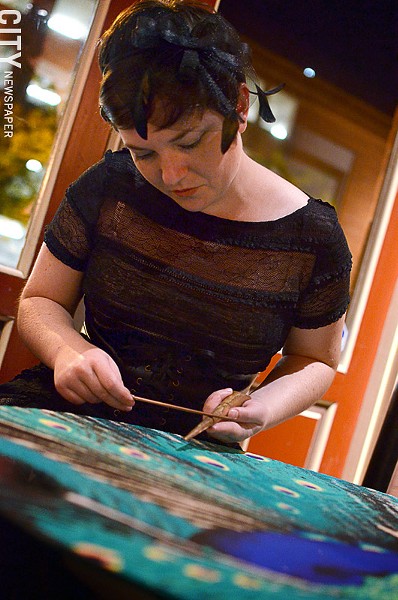 Before I left the theater, I briefly stopped by the Geva’s cafe to view “Ephemeral,” artist Katie Jo Suddaby’s live creation of sand mandalas. As she demonstrates the ancient Tibetan technique to creating the intricate designs, Subbady sits behind stanchion posts in Geva’s cafe, hunched over a circular pane of glass, painstakingly doling out lines of colored sand. It’s hugely impressive to see. The artist’s current piece is a highly detailed peacock, and nearly 30 hours into the work, it looked to be nearly complete. In keeping with traditional sand mandalas, after Subbady’s pieces are completed, they’re ritualistically destroyed (this is in keeping with the Buddhist belief in the transitory nature of life). If you have a free moment, I absolutely recommend you take a moment to stop by, chat with the artist and see the work before it’s gone forever.

(The mandala will be on view at the GevaNextstage through Saturday, September 28, 10 p.m. Admission is free.)