PHOTO BY MARK CHAMBERLIN Kevin Sean Sweeney, Stephanie Sheak and Jeff Siuda in "The Author's Voice" by Out of Pocket Productions.

Ambrose Bierce’s (1842-1913?) death was enigmatic -- a journalist who traveled to Mexico in 1913 to interview Pancho Villa, he simply vanished, hence the “?” -- but his life was definitely a troubled one. Fighting in the Civil War, an unhappy marriage, and the death of his children helped add vitriol and disillusion to his inkwell. These disappointments bore fruit in numerous articles, books, and essays. The best-remembered is probably the bitterly aphoristic “Devil’s Dictionary” (sample definition: “Alone: In bad company”), and I recall Bierce as the author of “An Occurrence at Owl Creek Bridge,” source of a short movie that everybody had to see in high-school English class once upon a time.

He is an interesting character, not much remembered today, and Ed Scutt’s play “Almighty God Bierce” tries to see him whole. (The title is a nickname given to Bierce by a contemporary.) A shortened version of this one-man play is being performed at GevaNextstage with Roger Gans as Bierce. It is interesting enough, but seems to move abruptly from topic to topic; I assume the full-length version fleshes out Bierce’s story more. (I did hope to hear a little more about Mark Twain -- and you may enjoy Bierce’s assessment of Susan B. Anthony as “a hatchet-faced angularity.”

Roger Gans tackles Bierce’s elaborate, 19th-century prose style with confidence and clarity; he seems quite mild-mannered for a man I imagine as a sulfurous, bitter raconteur, but for all I know Gans is closer to the truth. I hope I get the chance to see the play, and the performance, complete. 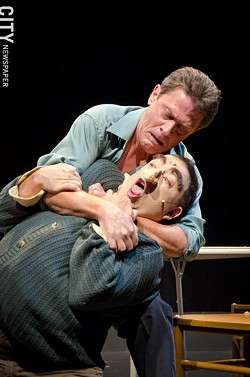 Out of Pocket Productions is presenting “The Author’s Voice,” a one-act by Richard Greenberg (“Take Me Out,” “The Assembled Parties,” “The Violet Hour”) at Geva’s Nextstage -- a very entertaining production of a witty and occasionally moving play that brings a new meaning to the idea of author as closet case. Here the acclaimed author, Todd (Kevin Sean Sweeney), has his deathless prose written by the ugly, deformed but poetic soul Gene (Jeff Siuda), who does indeed live in Todd’s closet and yearns to escape. Todd tries to keep Gene a secret from his amorous editor Portia (Stephanie Sheak), but she…well, let’s not give it all away. Suffice it to say that the secret is outed and Gene has a very satisfying revenge on Todd.

Sweeney and Sheak are excellent and land their laughs easily, and Siuda gets every nuance out of a spectacular role that is part Quasimodo, part Cyrano, and part John Belushi, in a hilarious and quite touching performance. He’s not the only reason to see “The Author’s Voice,” but he is definitely giving a performance to remember.