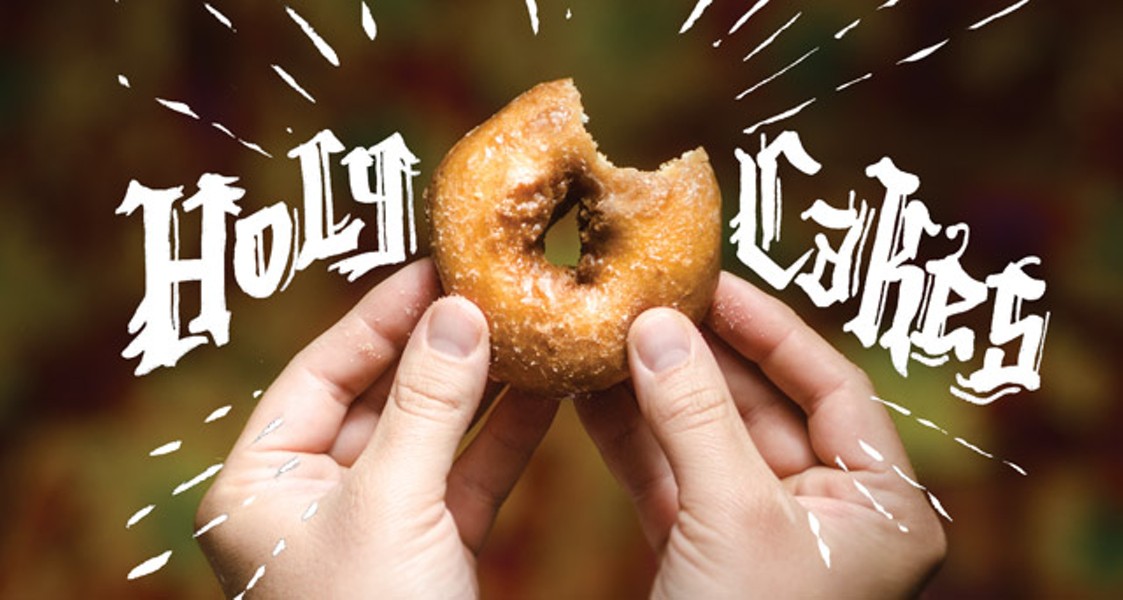 Fall is fried cake season. That first snap of cold turns on a switch in Rochestarians, when nothing else will go with our apple cider than a homemade sweet that's at once pillowy, hearty, crunchy, and full of nostalgia.

Fried cakes are like the doughnut's country cousin. While the standard yeast doughnut involves a rising before frying, the fried cake (or fry cake) keeps an inner density and uneven outer crust that harkens back to the olie-koeken tradition of our state's Dutch settlers — and maybe even taps into a more innate urge to fatten up for the winter.

The ingredients are simple: flour, sugar, eggs, butter, milk, and spices, and perhaps apple cider in place of water, are all mixed, shaped, and then finished in the fryer. But methods and styles vary from just one simple standard, and loyalty to a favorite may be held just as tightly as a baker's "secret family recipe."

My own favorite has long passed: Hutteman's fried cakes from Webster, which supplied area cider mills for decades, closed up shop in 1993. I'm sure I'm not the only local who still misses Hutteman's chunky, rustic quality. But it is a big round world out there, so I set on a quest to find Rochester's Holy Grail of local fried cakes. My research didn't yield one, ultimate fried cake, though. Instead, I found we have a number of them. While many places in Rochester make fried cakes, these seven truly stand out.

Do you have a favorite fried cake? Let us know in the comments below this article online at rochestercitynewspaper.com. 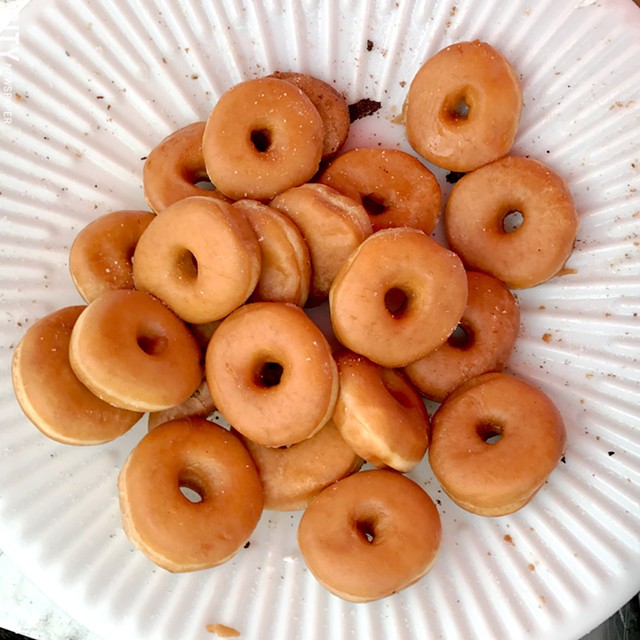 You can't miss the signature orange tent at the Rochester Public Market, but it's the scent of warm dough and cinnamon that'll brings you in. For the past two years, Duke's has set up a no-fuss stand with a singular purpose: fried cakes made fresh on the spot.

Duke's sources the apple cider for its cider fried cakes from Kirby's Cider Mill in Albion, and it's used in a recipe passed down from the original Duke, the grandfather-in-law of co-owner Chad Longman. Duke would make fried cakes for family, but he dreamed of someday opening his own stand. Although Duke didn't live to see this dream realized, his namesake and family custom have become a local sensation.

These fried cakes have a subtle spiciness to them, and are served hot with a generous coating of cinnamon sugar. Staving off the temptation to devour them at once, however, will be rewarded when the sugar layer cures nicely to a fine shell. One now, and one later is the best strategy. 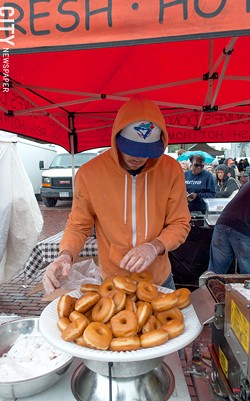 Duke's Donuts is located in the Rochester Public Market, 280 North Union Street, and is open Saturdays year-round and Thursdays seasonally. 716-262-9020.

Janice Hassett is in her 13th season making fried cakes at Green Acre. She learned her technique from her mother, who had been making them at the family's business since 1980. "It's all in the timing," Hassett says, describing the balance of a "nice crusty outside, delicious inside."

Green Acre's fried cakes may seem more petite than others at first glance, but they feature only those best qualities and no excessive filler. The inside is just the right match of texture to round out each crusty bite. Hassett is also quick to point out that each fried cake has the caloric equivalent of three apples. More fried cake fun facts are posted at the shop to entertain the throngs as they await their turn at the treats, which are only available from mid-September through Halloween.

The winding, tree-lined Oatka Trail makes for a quintessential autumn drive to McPherson Orchards, which has been a mainstay for apples since the mid-19th century, expanding through the years with cider and evergreens.

The seventh generation of McPhersons opened the bakery in 2009, but it seems like it's been there all along, cranking out apple pies, crisps, breads, and of course, fried cakes at a steady clip. Rather than grab a box and go, prepare to watch through the kitchen's screen door as the fried cakes are made fresh to order.

These little guys are served hot in a paper bag, sprinkled lightly with cinnamon sugar — or not, depending on preference — and are light in color and texture, with a soft cakey quality without the crunch or loaded heft of their counterparts. McPherson Orchards' bakery is open on weekends only.

EDITOR'S NOTE: The bakery at McPherson Orchards is only open mid-September through October. 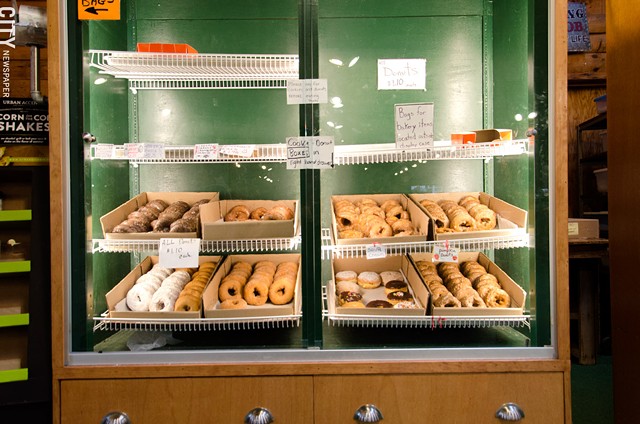 In its 50 years of business, Powers Farm Market has grown from a roadside wagon sweet-corn stand to one of the area's top destinations for all things fall. A sea of pumpkins leads to Powers' towering tee-pees, inside which are tiers of leering hand-carved jack-o'-lanterns and spooky atmospherics to keep kids fascinated. Then there's the petting zoo. And peacocks. And haunted hay rides running throughout the day and into the night.

All this stimulation is just occasion for the rush of Powers' fried cakes, available in plain, cinnamon sugar, glazed, pumpkin, chocolate, and sour cream. Powers featured Hutteman's years ago, but now a special off-site baker keeps up with the ever-increasing daily demand. These are dense, sweet, and moist — good fuel for the day's action. Still, if it's quiet you seek, a cozy sit at the hearth with a hot cider and fried cake is a fine option.

Say, vegan are ya? You want fried cakes, do ya? Well all you gotta do, see, is go in back of that storage building over there, see, and knock on the door, see ...

In fact, that's exactly it. For now, Pudgy Girl operates from a commercial kitchen inside the East Avenue Storage Building across from the Rochester Museum and Science Center. From there, self-proclaimed "baker and/or mad scientist" Jenny Johnson serves up cookies, brownies, cheesecakes, doughnuts, and other vegan goodies. Her cider fried cake is moist and spongey with that strong apple flavor. Granular sugar creates an outer candied effect, making this a pretty decadent treat.

Johnson is seeking her own storefront location, but for now sells her products through vegan outlets such as Abundance Food Co-op, Balsam Bagels, Dogtown Hots, Lori's Natural Foods, and Red Fern. Because they are best fresh, doughnut varieties are only available through Pudgy Girl directly or from Hettie's Delites at 1 Public Market. 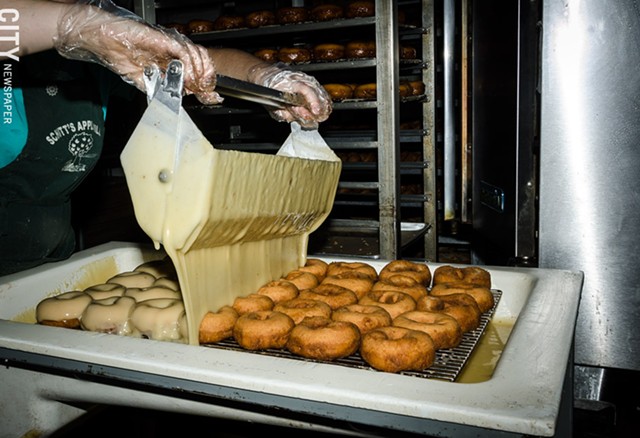 Hutteman's fried cakes were a draw at Schutt's Apple Mill for years, but with the baker's retirement in 1993, so too went the recipe. That same year, Marty Schutt wasted no time and built an in-house operation so there wouldn't be an interruption in fried cakes. Through these 23 years, Schutt's has developed quite a close take on Hutteman's famous cakes: crusty, hearty, and cutely chubby. Demand is so great that Marty's son, Evan, whose great-grandfather started the family business, changed careers to devote himself to overseeing the work of fried cakes, which require two daily shifts of constant production during peak season.

Fried cakes are sold year-round in plain, glazed, and cinnamon sugar. Schutt's other offerings include several varieties of apples, apple cider, fresh baked goods, and many New York State specialty foods. Schutt's is a fall institution and continues to grow, having expanded to a country gift store, and, most recently, adding the Blue Toad Hard Cider tasting room. 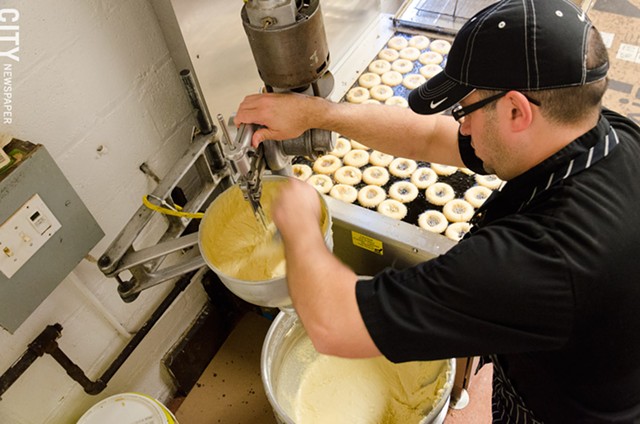 One of the big autumn draws at Zarpentine Farms is the giant corn maze, but for our purposes it serves simply to add to all of its fresh-baked indulgences. Pies galore, cookies, scones, turnovers, and cinnamon rolls almost distract from Zarpentine's cider and many varieties of apples and produce.

The fried cakes are the standard plain, cinnamon sugar, and glazed, but they're special in that they all have a truly crunchy outer layer that is beyond crisp. This gratifying texture wraps an interior that isn't too heavy. Still, one is enough. You'll want to also try Zarpentine's little superstars: the apple fritters. Glazed, gooey, somehow crispy, and with thinly sliced apples throughout, these beauties are worth the trip all on their own. Be sure to arrive on the early side because they do go quickly. And then take a few laps through the corn maze.

EDITOR'S NOTE: This article has been updated to note that the bakery at McPherson Orchards & Christmas Tree Farm is only open mid-September through October