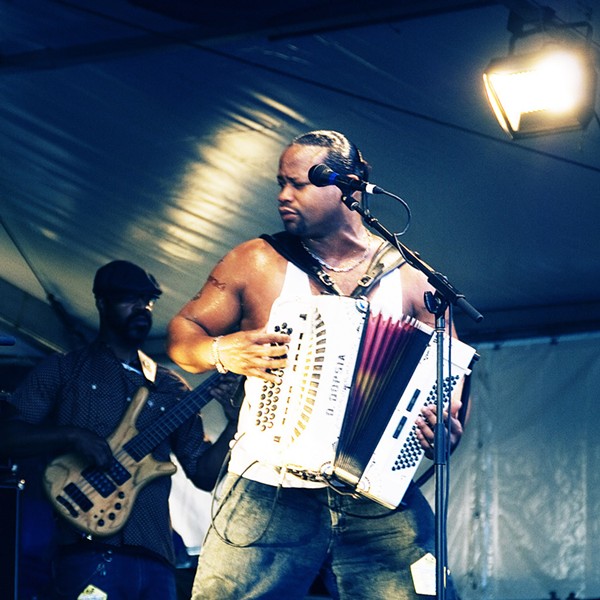 Ben Taylor Imagine the expectation that comes with being the son of James Taylor and Carly Simon. Ben Taylor lives up to that expectation, but with a voice all his own. His singing is soft and relaxing, but delivers a powerful punch of emotion. The Little Theatre should be a perfect venue for his brand of intimate performance. (AC) bentaylormusic.com

Cyrus Chestnut Pianist extraordinaire Cyrus Chestnut is the son of a church organist and a choir director, so it should be no surprise that even when he plays straight-ahead jazz it's infused with gospel. His specialty is inspirational music, so among the standards he chooses, you might hear tunes like "Bridge Over Troubled Waters." (RN) cyruschestnut.net

Dwayne Dopsie and the Zydeco Hellraisers Last summer Dwayne Dopsie blew the roof off of the Jazz Fest Big Tent. This is accordion like you've never heard it before. It's fast, flaming, and has all the cajun spice of Dopsie's Louisiana stomping grounds. And don't forget the washboard, drums, guitar, and saxophone that accompany it. (AC) dwaynedopsie.com

Frampton's Guitar Circus It's not so much a bucket list, but rather a to-do list. Somewhere about midway down is to hear Humble Pie's "30 Days In The Hole" blasting off the Eastman Theatre stage. Most may know the band's guitarist, Peter Frampton, as a solo artist through his top-selling live album, "Frampton Comes Alive." Celebrating the album's 35th anniversary, Frampton is hitting the road with some heavy guitar talent with his "Guitar Circus" show. In Rochester's case it's Robert Cray. (FD) frampton.com

Giacomo Gates & Friends Giacomo Gates has absorbed the vocal stylings of Frank Sinatra, Jon Hendricks, and other greats. He also employs the phrasing of legendary instrumentalists like Dexter Gordon and Lester Young, and not just when he scat-sings. Gates' most recent album, exploring the music of Miles Davis, topped the jazz charts this spring. (RN) giacomogates.com

Gregory Porter The voices of Nat King Cole, Joe Williams, and Donny Hathaway can all be heard in the smooth, classic tones of Gregory Porter. The Grammy-nominated singer draws from these influences and adds his own soulful power. Every line he sings is packed with emotion. (AC) gregoryporter.com

Hilario Duran Trio Cuban-born Canadian pianist Hilario Duran is at the forefront of Afro-Cuban and Latin jazz. His playing and compositions have earned him two Junos, more than a dozen national jazz awards in Canada, and a Grammy nomination (FD) hilarioduran.com

James Hunter Six James Hunter is simply an incredible soul singer. And he slings a mean guitar over his band's classic chug. It's all there: rhythm and blues, swing and swagger. Hunter's voice is reminiscent of Van Morrison, for whom he sang back up in the 1990's. His latest with The James Hunter Six is "Minute by Minute," produced by Daptone Records' Gabriel Roth (Sharon Jones, Amy Winehouse). (FD) jameshuntermusic.com

Karl Stabnau Born and raised in Rochester, baritone saxophonist Karl Stabnau grew up around our city's jazz scene, and it shows. He won the Rochester Philharmonic Orchestra's "Search for a Star" competition, and won first place in the Jazz at Lincoln Center's jazz essay competition. Now he teaches and performs around New York State. (AC) karlstabnaujazz.com

Phronesis Bassist Jasper Høiby's fingers fly over his bass, while Ivo Neame and Anton Eger play piano and drums with equal flair. Together they are Phronesis, a word referring to Aristotle's concept of practical knowledge enhancing the quality of life. Jazzwise Magazine calls them "the most exciting and imaginative piano trio since EST." (RN) phronesismusic.com

Shemekia Copeland Blues-shouting chanteuse Shemekia Copeland goes way beyond her bluesy bloodline (dad was Johnny Copeland), breathing contemporary soul and even pop into her music. This ballsy blast furnace still adheres to the roots as she blows lids off joints worldwide. She's traded licks with the likes of Buddy, B.B., Mick, and Eric. Now it's your turn. (FD) shemekiacopeland.com

Youn Sun-Nah & Ulf Wakenius Swedish guitarist Ulf Wakenius, who played extensively with Oscar Peterson, can cram so many notes into a phrase he might be called the Oscar Peterson of the guitar. Wakenius will meet his match when he collaborates with the other-worldly Korean vocalist Youn Sun Nah. (RN) younsunnah.com, myspace.com/ulfwakenius