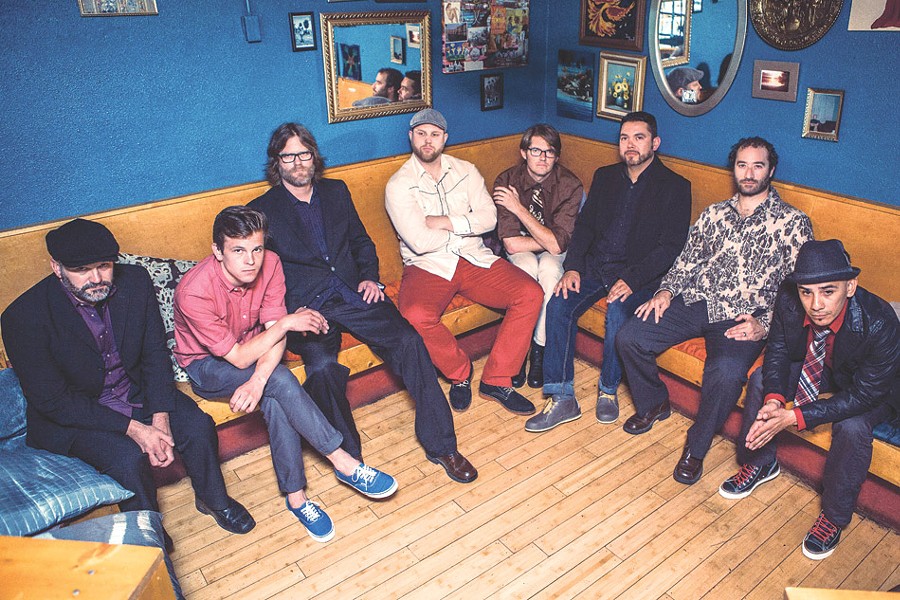 Brecker Brothers Band Reunion (Jazz fusion) Randy Brecker rose to fame in the 1970's as the trumpet-playing sibling in the funk-jazz group, the Brecker Brothers. His saxophonist brother, Michael, a beloved figure in both jazz and pop, died in 2007, but the legacy continues in a reunion band that includes many of the jazz stars who emerged from the group. (RN) randybrecker.com

Catherine Russell (Vocal jazz) Through facial expressions, body language, and vocal inflections, Catherine Russell lives her songs. As a background singer, she earned her stripes with David Bowie, Paul Simon, Steely Dan, Jackson Browne, and others. A voice that rich could not stay in the background for long; Russell is now firmly in the spotlight. (RN) catherinerussell.net

Driftwood (Roots, acoustic, Americana) Don't let things like the fiddle scare you; Binghamton, New York's Driftwood has a rock 'n' roll heart; that isn't to say the musicians don't flash the fleet-fingered flurry and prestidigitation associated with grassroots styles. It is the sound of boundless joy. (FD) driftwoodtheband.com

Fitz & The Tantrums (Pop) If we could only implore one artist to save pop music from itself, the clear choice of savior would be Los Angeles popster phenomenon Fitz & The Tantrums. New wave in appearance, soulful in tone, catchy in tune, this band is a party gone out of bounds. Whew, looks like pop's gonna be OK. (FD) fitzandthetantrums.com

Grace Potter (Rock) Grace Potter can wrap an audience around her finger so tightly that by the end of the show, it looks like room of sprung springs. With a lean toward an arena sound yet focused in an intimate club setting kinda way, Potter is the grande dame of the next big movement in rock music. Not blues, not country, not jazz or jam, but rock. You've been warned. You'll be sprung. (FD) gracepotter.com

Jam sessions with Bob Sneider Trio (Jazz) Every night, XRIJF musicians come off the stage fired up. They let off steam when they get back to the Holiday Inn, where the Bob Sneider Trio is deep into the nightly jam session. Sneider is a world-class jazz guitarist with top-notch support from Mike Melito on drums and Phil Flanigan on bass. Wynton Marsalis, George Benson, Chris Potter, and Eric Alexander are a tiny fraction of the stars who have sat in with the band. (RN) bobsneider.net

John Mooney and Bluesiana (Delta blues) When Rochester ex-pat John Mooney, now of New Orleans, last played the jazz fest, there were no walls, there were no doors, there was no lid left on the joint. Having studied at the feet of the master, Son House, Mooney plays traditional National slide with the added kick of Satan with his boot up your butt. Don't miss this one (FD) facebook.com/JohnMooneyLive

Lorna Reid (Vocal jazz) Unlike many of her contemporaries, Scottish songstress Lorna Reid's new album contains nothing but her own elegant compositions. She colors outside the lines plenty, but when she sinks her teeth into classic cocktail jazz, the temperature in the room begins to rise. (FD) lornareid.com

Polyrhythmics (Funk) Funk ain't broken, and Seattle powerhouse Polyrhythmics isn't trying to fix it. The band has however re-tooled it and given it a sense of reserve and patience. The horns don't just fire off their salute but rather slither to counter the rhythm section. Holy crap! (FD) polyrhythmics.com

Quinn Bachand's Brishen (Gypsy jazz) Almost every year a star is born at the XRIJF. This year's model may be Quinn Bachand, a 20-year-old from Victoria, Canada, who plays guitar, fiddle, bouzouki, B3 organ, banjo, and percussion. Apparently he can also sing. With a breezy style rivaling that of Django Reinhardt, Bachand swings like crazy. (RN) brishenmusic.com

Sarah McKenzie (Jazz) Australian-born, Paris-based musician, Sarah Mckenzie sings like a bird as her fingers fan the keys. She's as beautiful as her music. What else can be said? I try to articulate more about her and my tang gets tongueled. (FD) sarahmckenzie.info

Scofield-Lovano Quartet (Hard bop jazz) Since starting at the top with Miles Davis in the 1980's, John Scofield has made a name for himself with the raunchiest guitar style in jazz, like Jim Hall meets Jimi Hendrix. For the last four decades, Joe Lovano has been widely viewed as an heir to John Coltrane and one of the greatest saxophonists in jazz history. (RN) johnscofield.com; joelovano.com