Frida Kahlo: the making of an art icon 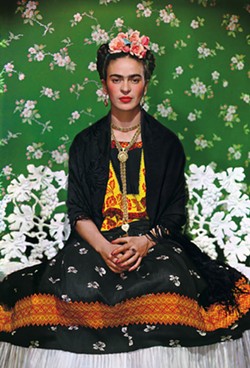 Mexican painter Frida Kahlo died nearly 70 years ago, but her iconic image lives on — arguably more than her artwork itself — with her distinctive unibrowed visage adorning everything from coffee mugs and pins to tote bags and t-shirts.

“Frida Kahlo: Through the Lens of Nickolas Muray,” on display at the Rockwell Museum in Corning through Jan. 22, explores the origins of that image through a series of photos shot by Muray, a Hungarian immigrant who came to the U.S. in 1913 and helped to popularize color photography in publishing and advertising in the 1930s.

“We were engaged by the idea that Nickolas Muray had played such a strong role in crafting the iconography of Frida Kahlo,” said Kirsty Buchanan, the Rockwell’s curator of collections and exhibitions. “Without him being a pioneer in color photography, we would not have seen this vivid, brilliant, colorful Kahlo. Unlike a lot of other visual artists, what we know of her, and her iconography, is grounded in her as a person rather than her artwork.”

From 1931 to 1941, Muray and Kahlo had an affair that overlapped her two marriages to Mexican muralist Diego Rivera, and the ebbing and flowing of their relationship is reflected in Muray’s photos.

“Some of the gazes that they exchanged in the photos are very loaded and meaningful,” Buchanan said. “There are photographs of Muray with Diego and Frida, and everyone's looking at the camera and smiling except for Frida – she’s looking at Muray with very specific intention. And then there are other photographs of Kahlo in front of her easel with Muray in the background, and he's kind of returning that intense gaze.”

Kahlo faced many physical hardships in her life, including a bout with polio at 6, and a severe bus accident at 18 that left her bedridden for two years and in chronic pain thereafter. But she persevered while cultivating an image by adopting the colorful clothing and flowered hairstyles of the Tehuana, a matriarchal culture based in Oaxaca — both as a political statement (reflecting her Mexican-Indigenous roots), and for practical reasons (the flowing skirts helped to hide her metal body braces).

Muray ended his affair with Kahlo in 1941, but they remained friends until her death in 1954. He last photographed her in 1948, capping the series of portraits that captured one of the more memorable artists of the 20th century — one who still resonates today. 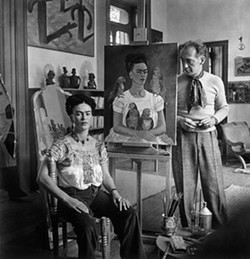 “Frida Kahlo is still so relevant,” Buchanan said. “We are fascinated with her as a person and as an artist, as well as the artwork that she created. We keep coming back to it and re-evaluating it because it keeps having modern relevant content and messaging for us to consider. And for us to be able to apply to our own lives the sense of specifically and intentionally crafting your image, and owning what you are presenting of yourself and editing your image — that's social media, that’s politics, that’s performance art.

“She definitely was aware of that and was able to harness it to communicate additional information and meaning about herself at a time when her country was not putting women and matriarchal ideas forward.”