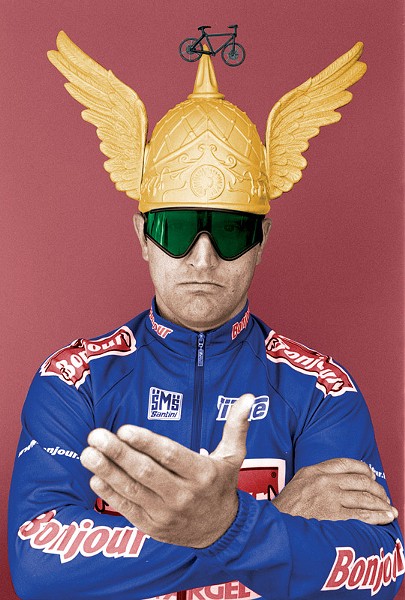 Sometimes once just isn't enough. The musical comedy "The Bicycle Men" was part of the first Rochester Fringe Festival in 2012, and is back as this year's late-evening show in the Spiegeltent.

The racy musical tells the story of Steve, an American tourist whose bicycle ride through France gets derailed in a strange, small town. Original cast members Joe Liss and John Rubano — who met while working at the legendary Chicago improv hub Second City — will be accompanied by cast newcomers Derek Manson and Bruce Green.

CITY recently spoke with Liss, a Clifton Springs native, about the role of improvisation in creating the "The Bicycle Men," the character homages to classic entertainers, and how moving the show to the Spiegeltent will affect the performance, among other things. An edited transcript of that conversation follows.

CITY: To what extent does improvisation play a role in the performance?

Joe Liss: We used improvisation to write the show. We'd be all around the computer, or we'd be sitting around in the office coming up with material, and you know, we would maybe go off and we would improvise dialogue, and someone would say, "Oh, that's good — remember what you said." And we would write that down. But the show is scripted and the songs are all written.

For actors who are experienced improvisers, is it atypical to create the show that way, or is your approach to "The Bicycle Men" common when building a show?

It depends on the project, and it depends on the writer or the performer. There's many schools of thought in improvisation. Well, there's two schools of thought. Some people believe that improvisation is not really a performance — it is not for performance, but it is for creating, writing, and it's a tool to create material. And you know, there's the other school — which is very big now. I mean, it exploded. I myself, here, living in the Bay Area, I perform in improv groups. We get suggestions from the audience and go.

Some of the characters in the show seem to be modeled after classic entertainment icons. For example, your character Offal the mute seems indebted to Harpo Marx. And then there are the characters that you and John play that mirror Jerry Lewis and Dean Martin. Do you find that the inclusion of those characters roots the performance in a way that can provide the audience with familiar archetypes?

They spark to it and then can see — you sort of hit the audience on two levels, like this realization where they see, "Oh, they're doing Martin and Lewis." But they're also laughing about the material they're singing about, too. They kind of get double-edged entertainment, sort of, I guess you'd say.

You've performed "The Bicycle Men" at the Rochester Fringe before. What can audiences expect this time around?

What is it about musical comedy as a medium that makes it so effective? How might "The Bicycle Men" be different if it contained only spoken dialogue?

I've never really thought about the show without music. Music was always going to be part of the show... it would probably be more like a Marx Brothers movie, where it would just be very sort of plot-heavy, and the guys confusing people and doing they're setup jokes, and misdirection and that.

Even with the music, the Marx Brothers comparison can be made. And Monty Python has this, too, where there's a sense of anarchy. The core value is zaniness. That seems to be the common thread that holds "The Bicycle Men" together.

The show is always about Steve wanting to get his bike fixed. It comes up to a few things, about Steve's willingness to subject himself to all this sort of humiliation and degradation from the townspeople, because he really takes a lot of abuse in the whole show. And at the end of the show, of course, he finally musters up enough wherewithal to confront these guys and get his bike back so he can get back on his journey. He's trying not to be that ugly American. He's trying so hard not to be the guy who's loud and obnoxious and not trying to speak French.

Meanwhile he's being confronted with plenty of ugly, loud Frenchmen... Is there anything I didn't touch on that may be worth talking about?

We got the ultimate compliment when we did the show in London. We did like a little talk-back with an audience one night. And [someone] said, "Normally, we the English feel that we're the only ones that can take the piss out of the French, that can make fun of the French the best." He said, "You guys come very close."