The 6-foot, 7-inch statue, which was at the corner of Alexander and Tracy Streets, is one of 13 statues of Douglass that have been placed around the city during the celebration of the 200th anniversary of Douglass's birth. All of the statues were created by Rochester artist Olivia Kim. It was apparently severely damaged, and police took it away. 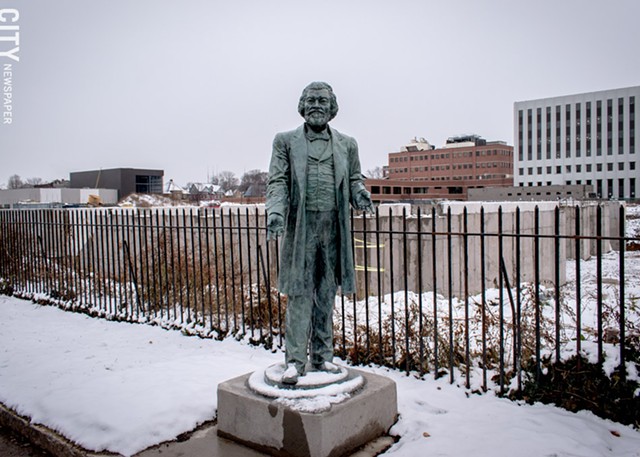 Shortly after midnight, police responded to a report of men trying to steal a statue and arrested 20-year-old John Boedicker of Endicott and 21-year-old Charles Milks of Kenmore. Both are students at St. John Fisher College.

"Me and my friend were extremely drunk," he said, "and for some reason thought it was a good idea to try and take a statue. It had nothing to do with the identity of the statue whatsoever like everyone thinks."

"Me and my friend did a terrible thing, and I will not deny that," he said, "but the motivation to it was 100 percent alcohol related. Nothing else contributed. I apologize to anyone and everyone whom we hurt by destroying that statue and we actually already apologized to the sculptor as well. We just want to make this right."

The vandalism brought an impassioned statement from leaders of the Re-energizing the Legacy of Frederick Douglass commemorative project, Carvin Eison, Bleu Cease, and Chris Christopher. They and others were devastated to hear about the damage and attempted theft and to learn that a witness heard the men using racial epithets, they said. The three also urged the community to “rise above the anger and disappointment” and turn it into “a teachable moment, as Douglass would have wanted us to do."

The group said the statue at the corner of Alexander and Tracy Streets will be replaced as quickly as possible.

St. John Fisher President Gerard Rooney released a statement on Sunday night saying that the alleged behavior “goes against who we are and who we strive to be.” The college shares the community's outrage, he said, and said the college will see that "those who engage in behavior that may violate the values articulated in the college’s mission statement are held accountable through the appropriate internal processes."

Rooney's statement also says the college recognizes the need to redouble its efforts to continue to educate the campus around issues of diversity and race.