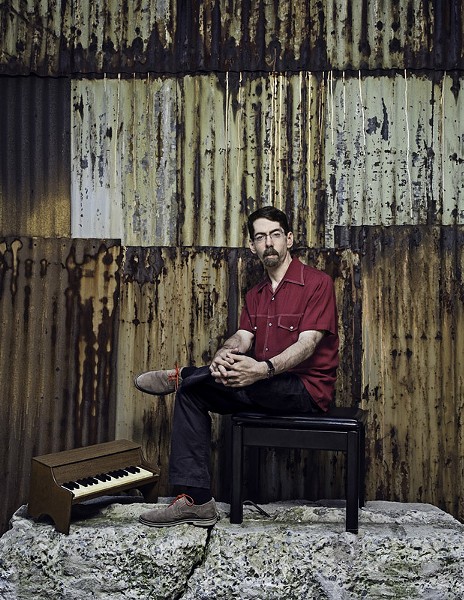 Growing up in Cincinnati, Fred Hersch noticed that there was a piano in his house, so, at the age of 4, he sat down and started to pick out tunes.

That precocious beginning led Hersch to a career as a sideman with greats like Joe Henderson, Stan Getz, and Art Farmer; as a leader on more than 40 albums; and an innovator who has expanded jazz into multimedia and the classical realm.

By third grade, Hersch was already writing music, so he studied theory and composition. It was the only formal composition training he's ever had. He was on the path to a classical career, but by 10, he realized he didn't have the discipline. "I found improvising a lot more fun," Hersch says. "When I found jazz it was a perfect fit."

Hersch played popular music and sang in choirs and high school musical productions, and liked the connections music provided. "Playing jazz, you're making music in real time with real people, not sitting in a practice room grinding out Chopin etudes."

He was soon drawn into the Cincinnati jazz scene. "It was totally below the radar," Hersch says. "You just kind of showed up and played tunes. There were a lot of strange people attracted to the music, not just the players but the colorful characters that hung out. It was all kind of romantic and interesting."

Hersch was already playing professionally in the mid-1970's when he was drawn to Boston's New England Conservatory. Jaki Byard, who played on so many of the records Hersch loved — by Eric Dolphy, Charles Mingus, and others — was teaching there. He drove to Boston and found Byard.

"I just remember going in to a room and playing a few tunes and him saying, 'You're in.' That was the end of it. I never went through a formal jury process."

Hersch flourished at NEC (where he now teaches) but was intimidated by the idea of composing.

"I didn't write my first tunes until I was 24 because I thought I'm never going to write anything better than Billy Strayhorn or Wayne Shorter, so why bother?"

Upon graduation Hersch moved to New York. His reputation was rapidly accelerating and he found himself in saxophone great Joe Henderson's quartet. Was he intimidated?

"I felt, 'Here I am on the bandstand with Joe Henderson, Ron Carter, and Al Foster," Hersch says. "I could be freaked out about it and think how did I get here or say once the downbeat starts we're all one quarter of this band. I wouldn't be here if I wasn't meant to be here."

Hersch went on to play with some of the biggest names in jazz. And over the past 30 years, he has forged a solo career as one of the genre's most original pianists. When he plays a standard, there is nothing standard about his interpretation.

"I know the words and sometimes the words will inform how I arrange or interpret a standard," Hersch says. "I've arranged a lot of tunes against type: 'How Deep Is the Ocean' as a slow ballad; 'You Don't Know What Love Is' is up-tempo in mixed meters. I want to do something that hasn't been done with it."

He's also written two major works that go well beyond jazz. He set Walt Whitman's "Leaves of Grass" to music and wrote "My Coma Dreams," a multimedia performance based on a two-month coma he experienced in 2008. His next major work is a song-cycle about photography with lyrics by poet Mary Jo Salter.

"The lines are blurred because I have a fairly deep understanding of the piano in the European classical tradition as well as the jazz tradition. So many of the great composers were improvisers — Bach, Beethoven, Mozart, Messiaen — so it's not a foreign thing."

In addition to writing music, Hersch is also writing a memoir for Crown Publishing. It will cover his amazing ride in the jazz world, but it will also deal with something he never could have foreseen.

Hersch is HIV positive. Over the last two decades he has raised awareness about AIDS and large sums of money for AIDS research.

"I call myself an accidental activist," Hersch says. "I had an opportunity to speak about something that I hope will be helpful to me and to other people in the same situation. I'm going to be 60 in the fall; I didn't expect to be 40. I'm pretty much a walking chemistry experiment at this point — 34 pills a day."

Hersch has never let the disease rule him; in fact, his career has only continued to expand.

Fred Hersch performs solo on Wednesday, June 24, 4 p.m., at Lyric Theatre, 440 East Avenue. Hersch performs with his trio the day before, Tuesday, June 23, 6 p.m. and 10 p.m., in Kilbourn Hall at Eastman School of Music, 26 Gibbs Street. Tickets are $25 for the Kilbourn Hall performances, and $20 for the Lyric Theatre performance. Or you can use your Club Pass at all performances. fredhersch.com.