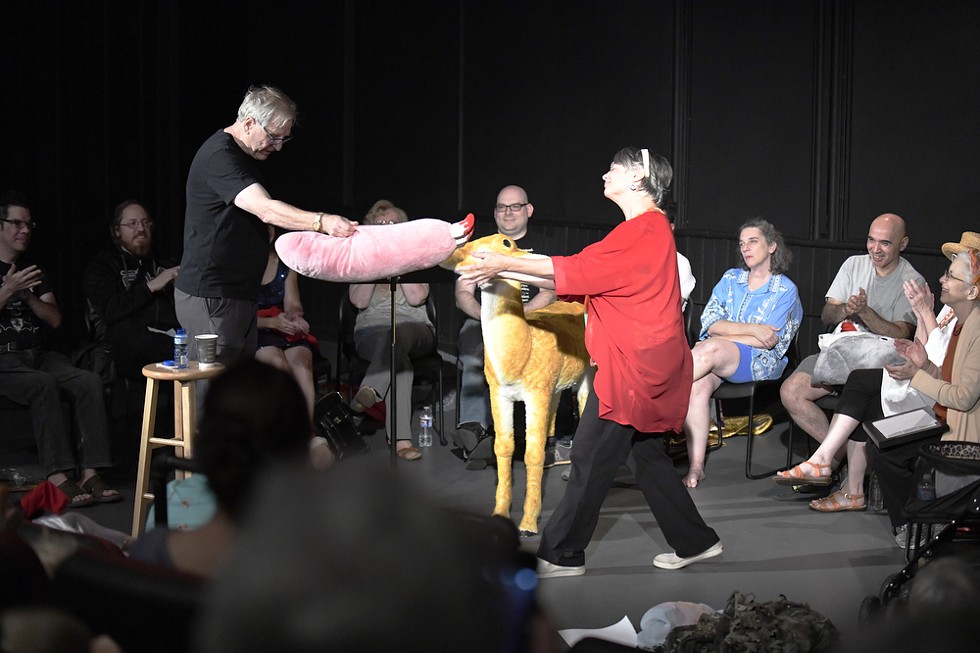 Alt-theater impresario, fringe of The Fringe, and madman John Borek said adios to The MuCCC performance space on Tuesday night after reigning there for 10 years with contrarian and maniacal delight.

The attendees in the joint expected this producer of some of the worst theater to pull off the unexpected and Borek didn’t disappoint; he did exactly the expected, which no one expected —- the fools. It was what he had clearly intended to do and instead of bidding a fine farewell with tears and hugs and hankies, the man joined with a group of local actors (in particular Borek's mentee Spencer Christiano) on stage, and they took that opportunity to barrage him with maximum chin and finger wag.

But don’t pity him. It was Borek who invited the unapologetic shaming in the first place. He has always conjured chaos and calm, insult and salvo as an art and defines it as such. And this time around he mish-mashed them all in 45 minutes of free form art that included a golden Buddha outfit and slightly scary pile of dolls the audience was asked to pick out — I named mine Dahlia and she watched the whole performance with me. The show was a bittersweet, fleeting moment in time. But don’t go gettin’ all broken up about it; I don’t think we’ve seen the last of John W. Borek.

"The Theater World of John W. Borek" will not be performed again during Rochester Fringe 2019.