The Spiegeltent strikes me as a steampunk spaceship sent down to teach us the art of the spectacle. In an unrelenting fast-paced show, a sold-out crowd was treated to Cirque Du Fringe -- jugglers, contortionists, dancers, acrobats, slapstick comics, one guy who balanced 10 spinning plates on sticks the way I saw it done on the Ed Sullivan Show, and two maniacs with crossbows. (I mean, they did that whole William Tell apple on the head routine.)

Our lanky, likeable carnival-barking host started out the show promising to cure your blues and irritable bowel syndrome, but it turned into a psychedelic dream not unlike that episode of "The Simpsons" where Homer trips out on insanity peppers. The real trippy part was the two-man orchestra. Not a duo. Not a combo. Not a band. But a goddamned orchestra, who despite the hi-jinx flying around them, laid an amazing multi-layered, multi-styled soundtrack to the proceedings. Though they were merely two, the guitarist had a pedal board that rivaled Air Force One.

I was in stitches the whole time and laughing soda through my nose when I wasn't using it to wash down the fingernails that I chewed nervously in other spots -- did I mention the crossbows? I don't want to give too much away with a blow-by-blow playback. Suffice it to say, this is an awesome, not to be missed hootenanny.

"Miracle Cure" will be performed each day of the Fringe in the Spiegeltent. Check rochesterfringe.com for specific times. $29. Appropriate for ages 13 and older. 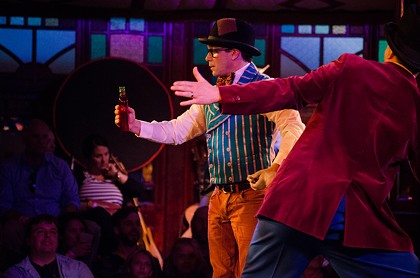 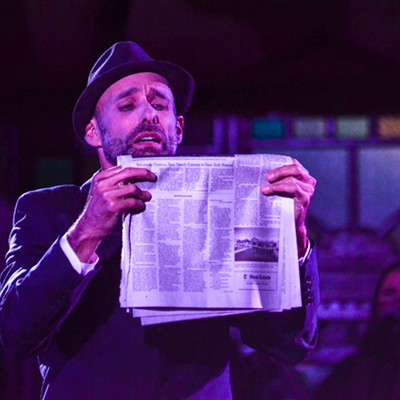