"Under Pressure: Redefining the Multiple"

Last Friday's opening of "Under Pressure" at Rochester Contemporary marks a new collaborative series between the art center and The Print Club of Rochester, taking place annually for at least three years. The four artists featured in this go were selected for the striking ways they each push the media specific to their work, says Bleu Cease, Rochester Contemporary executive director and curator. While debuting the exciting new venture, the show also provides a peek at the expanded boundaries of contemporary printmaking.

I became familiar with the unique, imaginative work of Rochester-based artist Heather Swenson years ago, when City featured her work as part of the first in our series of emerging artist stories. Swenson makes playful silkscreen prints based on her collection of objects and material, creating environments filled with forts or playground-like structures, geometric forms, and a variety of imagery that appears to be taped to the print, but isn't.

Swenson achieves depth on the 2D plane in a few ways. Her sense of perspective when depicting structures within an environment is key, but she also expertly executes trompe l'oeil effect within the prints. Seemingly taped-on papers truly deceive the eye — she's dropped subtle shadows "beneath" them, some appear to be folded with peaks in the paper pointed out toward the viewer, and the tone of the (printed) blue tape is ever-so-slightly different where it overlaps the paper.

She toys with scale, placing vignettes of whole environments next to objects that should logically be much smaller. And she mixes her own colors, achieving some wonderfully pastel tertiary hues that seem to have emerged from a dream. An ongoing set of tiny prints Swenson has challenged herself to make each week of this year is every bit as engaging as her larger work.

Focusing on "the simple act of looking," Swenson says in her provided statement that she hopes to "create a space for observation and imagination to collaborate."

April Vollmer, who is based in New York City, works primarily in Mokuhanga Japanese Woodblock, and prints with a baren using sumi ink and pigment dispersions on handmade Japanese paper. Although her techniques are quite traditional, the prints are utterly contemporary, and Vollmer begins by designing on the computer. Influenced by her travels to Serbia, Italy, Japan, and India, her work is characterized by a mashup of traditional motifs. These may include Greek pottery, ornate architectural borders, chandeliers, and imagery of angels, birds, and plants.

The resulting effect is a series of new associations that are alternately ominous and playful — "Blackout" is a chandelier seen from below, through a portal of fern fronds; while the clever wordplay in "Your Tern, My Tern" alludes to both the swarms of birds filling the plane and the bullseye radiating in the center of the page. 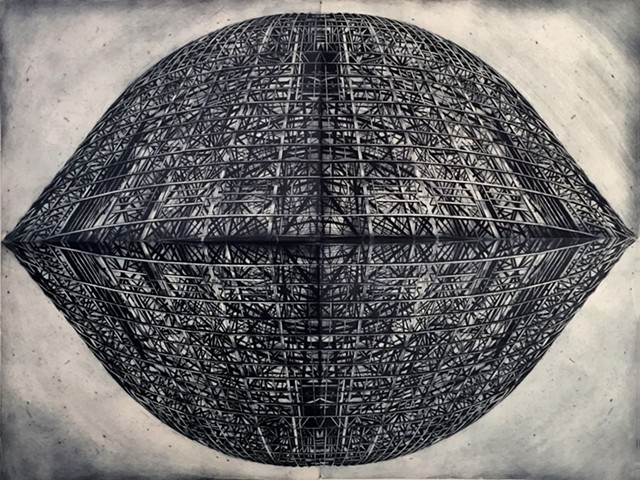 Jenny Robinson's move from London to a post-industrial section of San Francisco is reflected in the gritty, dreams-of-noir subject matter of her monumental drypoint monoprints. Focusing on the wasting and forgotten structures of industry and play, the scale of the massive prints is crucial to conveying both the size and the complexity of these fascinating structures.

Most of Robinson's works sees large objects — such as the exaggeratedly intricate armature of billboard towers or a tall, spiraling waterslide — isolated from their original environments into a grime-textured darkness, but "Paradigm" takes a step beyond, depicting a mind-bending, impossible object of beams that fish-eyes out at the viewer and curves away at its own horizons.

North Carolina-based artist Ellen Heck has two distinct modes of working represented in this show. The "Carolina Color Wheels," which vary greatly in result but are all based on a drypoint print of the same divided-circle plate, function as visual journals and color studies, but are beautiful works in their own right. Two grids, each with nine of these mixed media works, are presented here. Loosely connected by hue, the explorations are a fascinating exercise in exploration, where Heck has set up a structure just to bust out of its constraints each and every time. 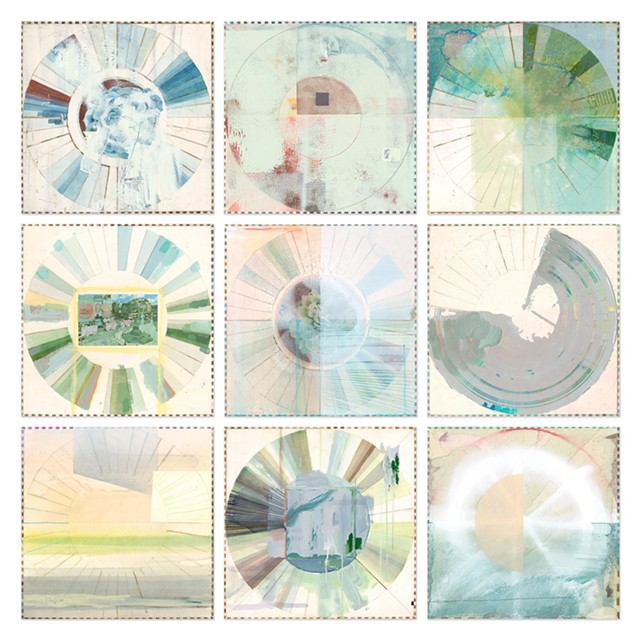 Heck's other series is a dozen portraits of young girls, which she calls "Fascinators." The title is a play on the word for fancy hats as much as it is a reference to the special nature of the hats. Each girl is subtly, surreally adorned with an impossible headpiece, including various Mobius Strips, and a Toroidal Scherk Surface.

The flat, detailed outlines of the drypoint-printed girls contrasts greatly with the paradoxical hats and the wood cut-printed and hand-painted details in their clothing. Each of the girls confronts the viewer with a steady gaze, with confidence or reticence.

The Mobius is a "physical manifestation of abstract or invisible concerns," Heck writes. "Themes that arise include recurrent and paradoxical thinking, the age of reason, communication, femininity, and the choices we make that define identity and our own realities."