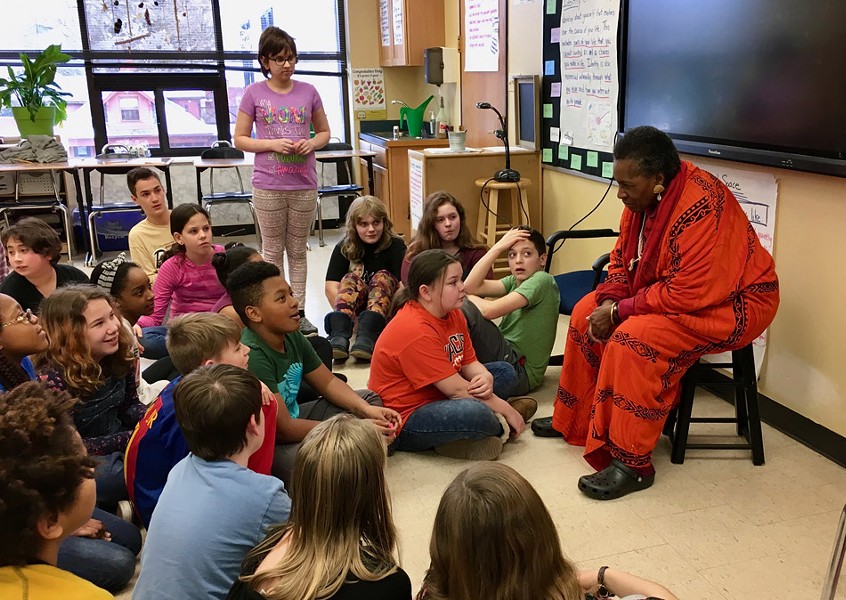 School of the Arts, 45 Prince Street

After experiencing financial difficulties, Young Audiences of Rochester (YAR) in late 2017 ceased functioning in its role of connecting its roster of teaching artists to schools and libraries. For decades the nonprofit would recruit and book artists to bring their creative, educational programming into the classroom. Since then the artists and area educators haven't easily connected, but many of these artists have banded together as an alliance of sorts, calling themselves Teaching Artists ROC (TAROC). On Thursday, September 27, they'll hold a free showcase at School of the Arts for area teachers, administrators, and librarians to attend and get a taste of the programming they offer.

More than 20 artists and ensembles -- including dancers, musicians, storytellers, and variety artists -- will each have their own table set up with materials to share, and educators can chat with the artists to learn more about what they do. They'll also have the opportunity to see shortened versions of their acts on one of two stages (the showcase organizers recommend that educators come in pairs or groups, split up, and compare notes afterward).

But it's about more than just finding opportunities for work, says Larry Moss, artistic director of Rochester's grand balloon art installation group Airigami and one of TAROC's founding members. The group believes in its mission, he says. "It's not even just showcasing our various artistic skills, but using art to enhance the curriculum. We all have our own ways of tying our work into classroom studies. In my case, I'm working with balloons, but I'm teaching science on stage."

One of the programs Moss offers is "How to Catch a Mouse: Simple Machines at Work." Recommended for grades K-6, the show is an interactive, theatrical performance of constructing a balloon-based Rube Goldberg-style mousetrap (who didn't love that game?) that teaches kids how simple mechanical devices work with natural forces, such as gravity.

PUSH Physical Theatre creates workshops in collaboration with teachers, with a range of past themes including weather, metamorphosis, and bullying. TAROC also has storytellers who work history and literature into their acts. But there are also non-lesson-based, kid-oriented shows that get booked for end-of-year celebrations and holiday celebrations. You can see the current roster and the programs they offer at teachingartistsroc.com.

Moss and a core group of teaching artists began planning their first showcase soon after YAR announced it was closing its doors. "The stories being told were the negative ones about artists not being paid, instead of the positive story that there are artists who still want to share what they do."

Less an organization than a collaborative project of the artists, TAROC had two goals, Moss says: To get the roster available for people to find and to create a showcase to give teachers, administrators, librarians a chance to see the artists and talk to them in one location.

"We're still all working independently, we are not replacing the role of Young Audiences, we're not replacing an organization that did all of the booking," Moss says. "Really all it is, is independent artists and ensembles banding together to find a way to be seen and recognized, to let the world know that the teaching artists are still out there. There are a large number of professional artists, professional educators that are also artists, that want to continue bringing the educational content to classrooms in a fun artistic way, in a way that can be meaningful for more students and for teachers."

Much of the funding to support the artists, when they were booked by Young Audiences, came from New York State and through Monroe Country's Board of Cooperative Educational Services (BOCES), which will continue to work with participating school districts to help fund arts-education programs.

And since TAROC began organizing, Young Audiences of Western New York (YAWNY), the chapter based in Buffalo, has stepped up and said they're interested in working to help continue the mission of YAR in the Rochester area.

A benefit of having a middle man is there's "someone to do the paperwork and allow us to concentrate on the programming that we're good at," Moss says. But he adds that there are a number of artists in the group that want, at least at this point, to keep working independently: "After having a bad experience with one organization, they're worried about having it happen again."

An additional bonus of holding the showcase is that it was traditionally the annual chance for the artists to get together and share stories about the schools they're worked with and the things they're working on. "As independent artists, we don't see each other that often," Moss says.

The current TAROC roster of artists only includes artists who had been vetted by Young Audiences. "Our goal was to provide a roster that educators could look at, of programs that artists can provide for the schools, of artists that have experience in the schools, who are going to provide content that is valuable," Moss says. "Having that roster that a teacher or a school administrator, or a PTA rep can just look at and know that it's not just random names, but people who care, who have been in the schools for a while, seemed like a valuable thing to do."

But TAROC is considering adding other artists to the roster who have made inquiries. "I want to work with all of them," Moss says. "So hopefully we can figure out how to do that."


Catch them at the showcase:

For more information about each artist and ensemble, visit teachingartistsroc.com.

In Jest with Nels Ross