Much like photography, accounts of the past have a tendency to project a sense of authority. We may absorb each as bare fact, instead of what it really is: an account, a version, a distortion through an individual or cultural lens. The current exhibit of David Levinthal's photographs in the Eastman House's Project Gallery explores how our understanding of historic events, photography, and our imagination inevitably intermingle by spotlighting toy figures as cultural artifacts, and by not entirely hiding what they are. 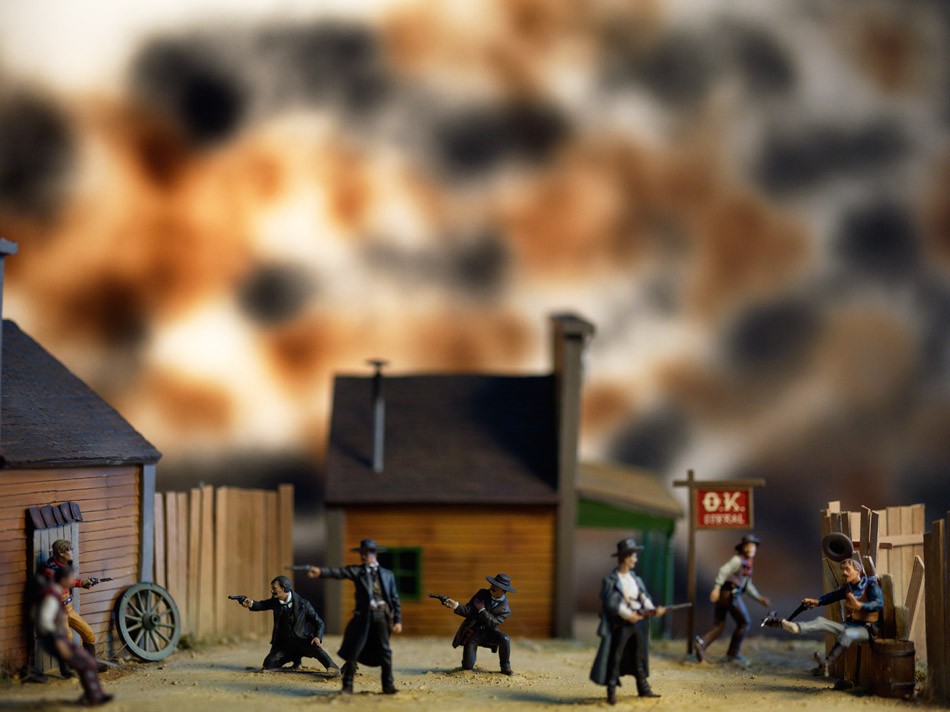 Thirteen of the 80 photographs in Levinthal's "History" series fill two rooms, their massive scale is a reference to the genre of immense history paintings popular in the 16th through 18th centuries. "History" refers not only to moments in time, but also to this genre of cherished, morally-uplifting, often patriotic themes that we pass down though historic anecdote in lecture and art. But here, the artist raises questions of subjectivity in the recounting.

Levinthal launched his career with "Hitler Moves East: A Graphic Chronicle, 1941-43," a book of sepia-toned images of battle, drawn from photo-journalistic representations of World War II, and recreated with figurines and hand-built dioramas. The 1977 book was made in collaboration with Garry Trudeau (the Doonesbury cartoonist), and was a fictional documentary account, which included select archival materials, such as letters from the era.

Eastman House hosted the first exhibition of this work in 1978, and collected some of the photographs from the series. All these years later, Levinthal is back, with more images depicting pivotal moments plucked from the place where history and cultural mythology intersect.

"None of his work is an exact duplication of anything specific," says Lisa Hostetler, Curator-in-Charge of the Department of Photography at Eastman House. The images recall the memory and atmosphere of what they reference, she says. And though some reference specific moments made immortal through countless cultural mentions, those too are nonspecific.

In the first room, the "History" series overlaps with some images from Levinthal's series on the Wild West. These works, pinpointing not moments in history, but scenes from national folklore, explore "America's sense of its own identity, myths of freedom, individualism, and lawlessness, but undergirded by moral code," Hostetler says.

In "Alamo," men tussle atop a shell-shocked fort. "Gunfight at the O.K. Corral" freezes the chaos in the famed 30-second battle between outlaws and lawmen. Here, eight figures hunker, aim to shoot, fall backward, or prepare to bolt. A hat and a boot fly off a man as he hits a wall. Details of weeds growing against a shamble-y fence, a dusty ground, and a leaning wagon wheel suggest an authentic setting, even while a close look reveals plastic expressions.

Many of the toys Levithal works with come with their own sense of action: a flowing cape here, a waving flag there. But he's an expert at suggested arrested motion where there is none, through the use of lighting, focus, and props, like in "Helicopter," from his "Vietnam" series.

Struck by the opening of the film "Apocalypse Now," Levinthal recreated the scene's feeling with a toy chopper, photographed darkly and intimate against an angry, smoke-red atmosphere. In the blurred background, a rain of explosions is suggested with an out-of-focus, shimmering silk fabric catching the light just-so.

Levinthal not only points out the artifice of the constructions in the pictures, but also the artifice in the photographic transcription of history.

"Throughout his career, he's used toys as a way to get at the fungibility of ideas," Hostetler says. "Children play with toys, and they make up fantasies and act them out." It's culturally important to soak up and remember history, she says, but we gain the mistaken illusion that we understand it. 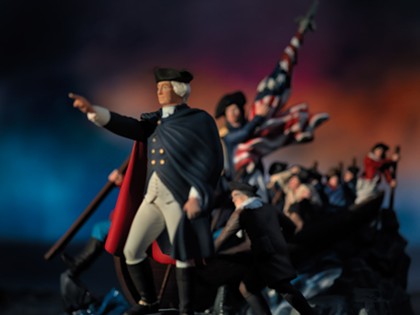 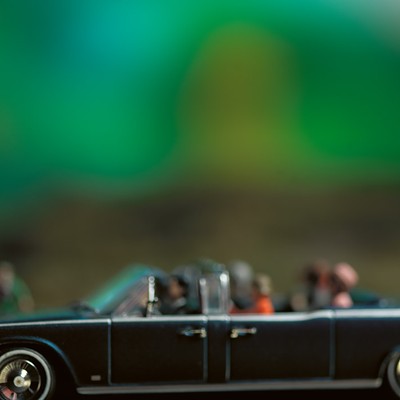 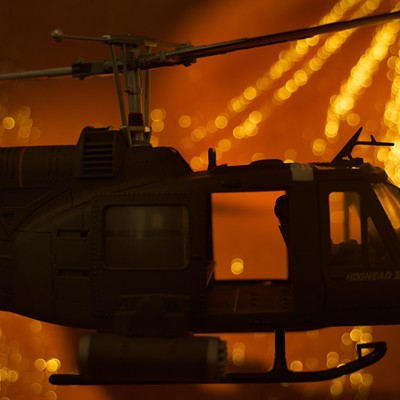 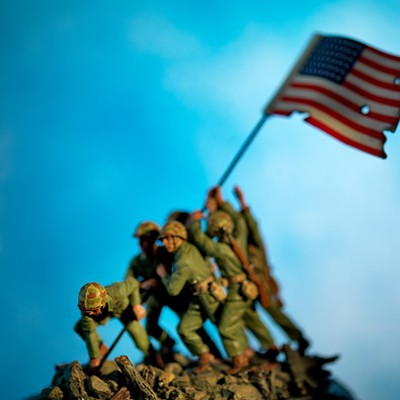 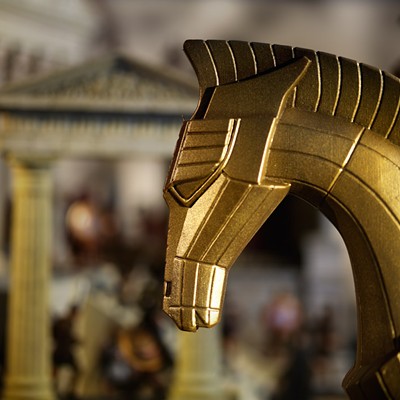 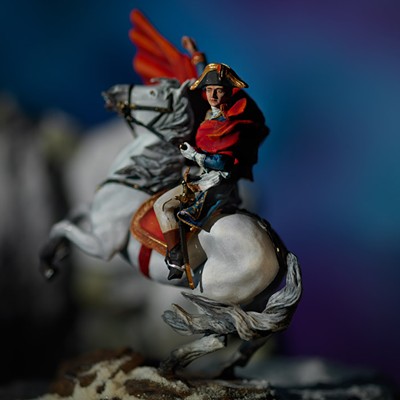 Particular moments from our American history are explored in "Washington Crossing the Delaware," and the ominous car ride in "Dallas, 1963," which is probably (and perhaps appropriately) the most blur-obscured scene, but instantly recognizable via Jackie's iconic pink pillbox hat.

The famous flag raising of "Iwo Jima" is resurrected here, on an island of rubble raised against a pristine blue sky. These sorts of scenes are etched into our memories repeatedly, and what we've seen over years affect how we see the piece, Hostetler says. We end up drawing not only on what we see in Levinthal's print, but also from cultural memory. This particular piece is interesting because it's since come out that the famous moment was staged for a photographer after the original flag raising happened, unwitnessed. The romance of our history is one big manipulation.

While the first room tackles scenes from American History, the second room gets a bit worldlier. In "World War I, The Somme," the scale of senseless horror is depicted with just two dirty figures of soldiers, one carrying the other, stumbling through a wasteland of rubble as far as the eye can see.

Levinthal's recreation of the iconic Jacques Louis David painting of "Napoleon Crossing the Alps" uses a toy that is clearly based off the same work: the leader points onward, in perfect control of a rearing white horse. Here, peaks rise behind the subject, and his cape and the horse's tail roar in the cold wind, and as in the painting, Napoleon's likely grimace is replaced by a plastic mask of calm. In the cell phone tour, Levinthal states that his earliest memory of this subject is of seeing the image in a Courvoisier ad in The New Yorker magazine.

Two images, hung on walls opposite from one another, focus not on historic individuals, but on containers pregnant with doom. In "Fall of Troy," the gilded gift horse dominates the fore, with indistinct columns and hesitant citizens looking on in the background. The scene depicts a tense moment, like immediately before a bomb explodes.

The other image is "The Titanic," as it would have been seen from a short distance on the night of the disaster: No cinematic lights, no star-crossed romance, just the ship jutting at a terrifying angle from the icy water, hopeless and almost invisible in the murky night.

Levinthal will give a lecture and book-signing at Eastman House on April 2, and on April 19, the house will host a kids' day with a hands-on photography activity. Visit eastmanhouse.org for more information.