For these employers, there are no background checks, no drug tests, no interviews, and no problems 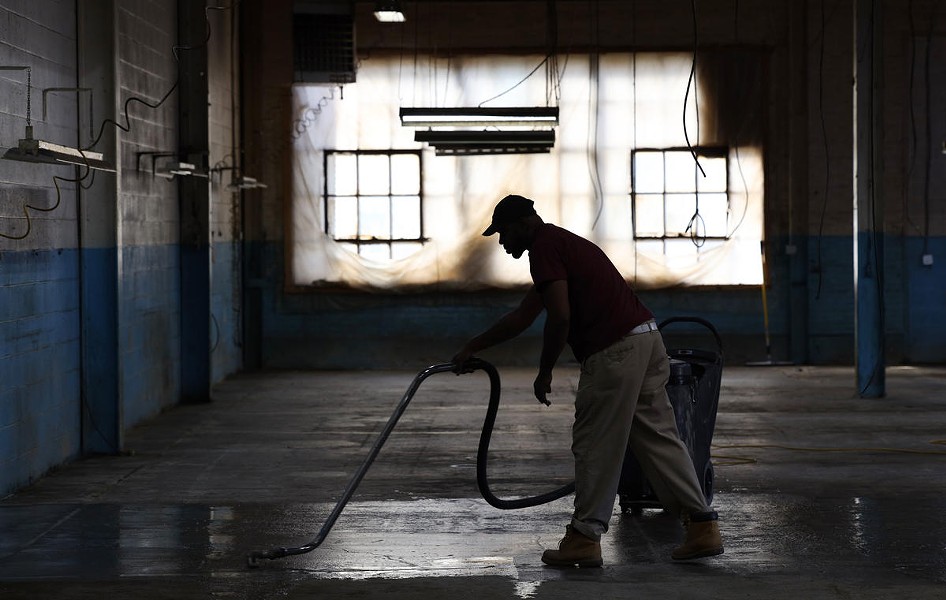 PHOTO BY MAX SCHULTE Eddie Chapple cleans and polishes a floor at an industrial park in Rochester's west side. He landed his job with CleanCraft through the open hiring process.
He probably didn't realize it at the time, but Sanford Coley's life took a dramatic turn in the mid-1990s.

That's when Coley, who is now 66, got a job at CleanCraft, a commercial cleaning company in Rochester. He had already interviewed for 10 or 15 other jobs before this one came through.

"Being an ex-felon," he said, "other companies just looked over me, and it was tough."

Ty Hookway, CleanCraft's founder and president, didn't know about his employee’s criminal history until one day, about six months after hiring him, he noticed an electronic monitoring device on Coley’s ankle.

"And it turns out he had robbed a bank, believe it or not," Hookway recalled. "He had just gotten out of prison and I had no idea, and I was completely nervous and worried and Sanford said, 'Give me a chance, give me a chance.' "

Hookway did give Coley that chance, and Coley earned his trust.

"Twenty five years later, he's one of my best friends. He's one of the smartest guys I've ever met," said Hookway. "He still works for me part-time now, but he retired after watching like 120 people, one of my highest-level and (highest)-paid managers."

Hookway said his experience with Coley inspired him to be more open-minded about who he hires. So when he heard the term “open hiring" for the first time, at a conference on conscious capitalism about six years ago, he had already been practicing a form of it for over a decade.

The concept is the main principle of the Greyston Bakery in Yonkers, New York, which opened in 1982. It was the inspiration of Bernie Glassman, an aeronautical engineer turned Zen master and Buddhism teacher from Brooklyn.

Glassman, who died in 2018, opened the bakery with the help of the Zen Community of New York as a way to employ his Zen students. He began hiring any student who wanted to work, even if they had an arrest record or lacked work experience.

NO BACKGROUND CHECKS, NO DRUG TESTS, NO INTERVIEWS

The Greyston Center for Open Hiring was later established to encourage other business owners to replicate the hiring model. It's targeted specifically at companies that need entry-level workers to fill jobs in areas such as production, construction, or cleaning.

The approach is simple. Anyone who is legally authorized to work in the U.S. can sign up on a first-come, first-served waiting list. When a job opens, the next person on the list gets a call.

"We don't do background checks, we don't do interviews, we don't do drug testing. We, basically, are looking at the person's potential and not issues that may have happened in their past," explained Mubarak Bashir, the regional director of the Greyston Center for Open Hiring of Rochester. "We just want to make sure we give people the opportunity to get to work."

In June, the Rochester site became the first satellite center to open outside of Yonkers, with encouragement from Ty Hookway and financial support from the Rochester Area Community Foundation, the ESL Charitable Foundation, and other organizations.

The center is in northwest Rochester at 55 Rutter St., off Lyell Avenue and adjacent to CleanCraft headquarters. Both the Rochester site and the Yonkers hub spread the word about the Greyston open hiring model throughout their local business communities.

Sara Marcus, director of the Yonkers center, said Rochester is a natural fit for the project.

"In some ways," she said, "even though it's a much smaller city, there are a lot of similarities between Rochester and southwest Yonkers in terms of rates of poverty and unemployment being generally higher than the national average, vast income inequality and racial disparity."

The centers not only urge employers to remove obstacles for prospective workers, they also provide wraparound services to help those who are hired succeed in their work.

That includes assistance with services like transportation, housing, and mental health. At Greyston Bakery and CleanCraft, even employees who were not brought on board through open hiring are eligible for the benefits. When the COVID-19 pandemic hit, executive-level professionals at Greyston received help with child care.

If open hiring opens doors for people who are homeless, have a criminal background, and no high school degree or other barriers to employment, what's in it for the employer?

Both Bashir and Marcus are quick to point out that it's a business model, not a social services program.

Marcus said the open hiring approach has made a difference at Greyston Bakery. Roughly 40- to 50 percent of the employees who start a six- to nine-month apprenticeship remain in the program.

"That's pretty much in line with industry standard, in terms of turnover," she said. "But then, those for whom it works out and they stay, they often stay for quite some time. We find that we get really committed, loyal talent through this model."

The Greyston Center in Yonkers works with a handful of employment partners, including the UK-based cosmetics, skin care, and perfume company The Body Shop.

According to Marcus, the company hired about 200 open hire employees to work at its distribution center in Raleigh-Durham, North Carolina, starting in October 2019. She said the facility then had a 60 percent lower turnover rate and a 13 percent increase in productivity.

"We've heard from The Body Shop at their distribution center that suddenly their supervisors were more engaged in the work because suddenly their job wasn't just moving boxes. They were really in the business of transforming lives," Marcus said.

Still, not all employers are convinced open hiring would work for them. Hookway hears this all the time.

But open hiring doesn't have to be an all-or-nothing proposition. At CleanCraft, for instance, about 10 percent of its 400-person workforce is hired through this model.

And they're not guaranteed a permanent job, only an opportunity. Marcus said the biggest misconception about open hiring is that there is no accountability for workers.

"I think people think that there's chaos in our bakery because we do no screening on our employees, but that's so far from the truth," she said. "Our bakery supplies brownies to Ben and Jerry's, so we have to meet the highest food safety and quality standards, and we also have to run a profitable business and so we have a pretty rigorous accountability model in place."

In the fall of 2019, Adrian Hale, strategic initiatives manager at the Greater Rochester Chamber of Commerce, toured the Greyston Bakery in Yonkers.

He was quickly sold on the concept of open hiring.

Hale said organizations like Greyston don't view corporate social responsibility as a public relations endeavor, but as a way to create shared value for high-needs populations and the community at large.

He thinks Rochester can benefit from the initiative because he believes the practices that employers in the region have been using have not been historically equitable or inclusive.

"I grew up in the 14621 ZIP code, extremely poor," said Hale. "We were dependent on every government program you can imagine, and I just can't help but think if these kind of workforce developers and talent strategists and economic developers were having these kinds of conversations when I was a young kid, how much different my life and the lives of all my peers would be."

Bashir has been cold-calling local business owners to educate them and try to sell them on the open hiring concept.

He's also having conversations with community-based organizations about how open hiring could serve some of the clients they work with.

At CleanCraft, Sanford Coley recently came out of retirement to help the company manage cleaning crews during the COVID-19 era when new standards have to be met.

He has mentored a number of co-workers in his more than two decades with the company and sometimes he sees them climb the ladder like he did. 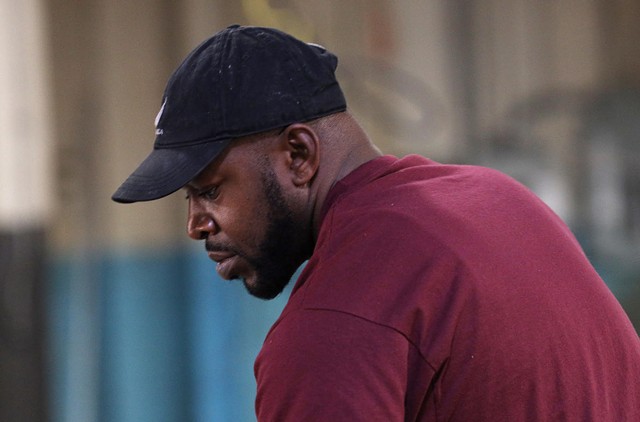 "You gotta be open minded about it and give a person a chance," he said. "You might get a bad seed in here at the same time and then you might get a great guy that goes from cleaning toilets to managing 10, 15 people."

Eddie Chapple, 40, was hired at CleanCraft six years ago. He said he landed the job through the open hiring process. Before that, he was juggling three part-time jobs and trying to build a new life after he served time in prison for drug possession.

"When I filled out my application (at CleanCraft), I didn't lie," Chapple said. "I told them I had a felony. I was actually on light parole when I got hired. Me being honest, they accepted it."

He said he feels respected and valued at work, which was a new experience for him. "It motivated me to do more hard work," he said. "In six years, I probably had nine or 10 raises."

Chapple said when his mother died four years ago, the company supported him through his grief.

On another occasion, he said he was guided through financial difficulties.

As for Coley, he said he has watched his income grow. When he started at CleanCraft more than 20 years ago, he made about $10,000 a year. He worked his way up to $50,000 and knows that because Ty Hookway gave him a chance, it changed the course of his life.