For the poor, search for equal justice continues

Life as a defense attorney for the poor often means long days, modest pay, and crushing caseloads. In the Monroe County Public Defender's Office, attorneys in some bureaus handle more than double the number of cases recommended by national guidelines.

The heavy workload has kept the office from providing some defendants in town and village courts with attorneys at their arraignments, says Public Defender Tim Donaher. The same thing has been happening in defenders' offices across the state, and the issue is part of a comprehensive lawsuit filed by the New York Civil Liberties Union against New York State. 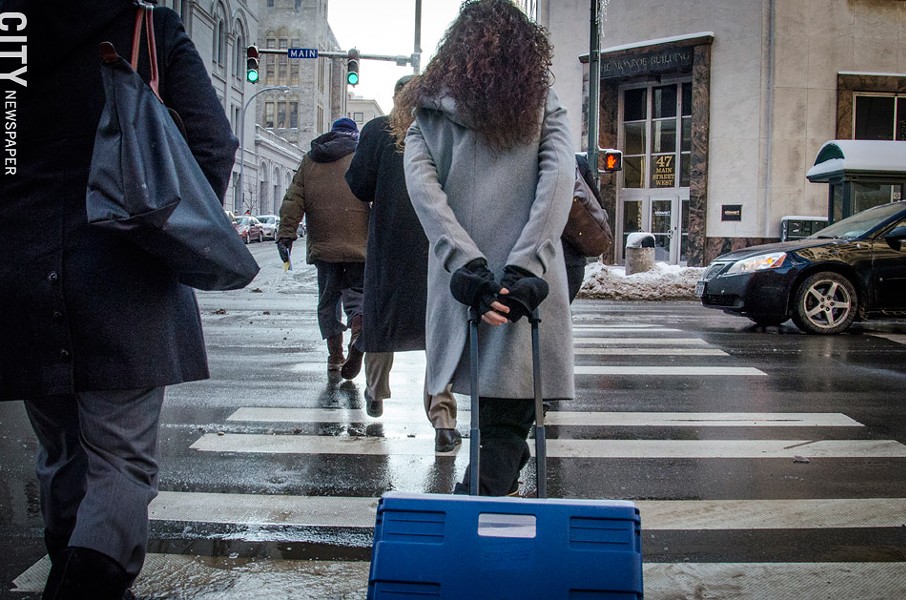 Public defenders have a crucial role in the justice system. Their job is to make sure that better-resourced government prosecutors respect the rights of poor defendants — disproportionately, people of color — who otherwise couldn't afford legal representation. They're by and large a passionate, driven bunch committed to fairness in the justice system.

But they frequently find themselves with inadequate resources — the fundamental factor behind their heavy caseloads. And that leaves them open to criticism: they don't spend enough time on each case, their defense efforts aren't vigorous enough, or they're too eager to take plea offers.

March 18 marks 51 years since the Supreme Court decision that states have an obligation to provide legal representation for poor defendants. The court's reasoning in Gideon v. Wainwright is simple: a defendant who can't afford to hire an attorney isn't able to get a fair trial, which strips the person of fundamental constitutional rights.

But attorneys, governments, and courts are still hashing out the exact obligations states have when it comes to providing legal representation for poor defendants. As each issue arises and is settled, the nation's patchwork public defense system evolves.

And that's what happening in Monroe County. The Public Defender's Office is working to advance a pair of initiatives that Donaher says would improve representation for the office's clients. Both initiatives take on issues raised in lawsuits, though the legal actions haven't involved the local public defender's office.

One effort, which Donaher is working on with other public defenders in the region, would set up a legal center to advise defense attorneys for the poor on immigration law.

And starting March 1, the Monroe County Public Defender's Office will expand the hours when attorneys are available to conduct arraignments. The change sounds minor, but it addresses a series of critical issues.

Another potential change to the county's indigent legal defense is a bit controversial. Late last year, the county began soliciting proposals to outsource some of its indigent defense work. The idea has been met with skepticism from the legal community, with some attorneys questioning the viability of the proposal.

The deadline for submissions has been extended three times, with February 21 as the latest due date. As of last week, the county hadn't received any proposals, says spokesperson Justin Feasel.

The county wants to outsource two of its indigent legal defense programs. The programs function separately from the Public Defender's Office.

The Conflict Defender's Office and the Assigned Counsel Program provide legal representation to poor defendants in criminal and some family court cases when the Public Defender's Office has a conflict of interest.

County officials want two outside firms to take over that work; one would handle mostly criminal cases, and the other would mainly be for the family court cases. The county plans to enter into five-year, fixed-payment contracts with the selected organizations.

"The county is interested in any and all proposals that will save taxpayer dollars while maintaining a high level of quality service," says a county-issued addendum to its original request for proposals.

But the county doesn't say what it would pay for those services. The 2014 combined budget for the Conflict Defender's Office and Assigned Counsel program is $3.9 million.

The caseloads would be substantial. In 2012, the two offices handled a combined total of 7,381 cases in criminal, family, and appeals courts, says the RFP. The Assigned Counsel program handled approximately 3,600 of those cases, and at a higher per-case cost than either the Conflict Defender's Office or the Public Defender's Office.

But Kenneth Hyland, a private criminal defense attorney who takes cases through the Assigned Counsel Program, says the comparison is misleading, since many of the assigned cases are complex felonies.

And assigned attorneys are paid $75 per hour, far below what a private attorney would typically charge.

Some local attorneys question whether any firm would be able to make the math work. Nathan Van Loon, a family court attorney in private practice, says that's probably why the county hasn't received responses to its proposal.

"The real question is can you run basically a business where you handle 5,000 cases for one firm, and 2,500 cases for the other on a total budget of $3 million or less?" Van Loon says.

If cost is the issue, particularly for the assigned cases, then the county may realize savings by hiring a few more attorneys for the Conflict Defender's Office and bringing some of the assigned cases back in house, Van Loon says. The county should study that option, he says.

Hyland, a former first assistant district attorney in the county District Attorney's Office, says he's not aware of any local law firm that could handle the additional caseloads proposed by the county. It's likely any organization would have to hire attorneys, he says.

"It seems like anybody in that situation would have an incentive to minimize what they're paying the attorneys to handle the cases," he says. "That could mean that they have less experienced attorneys handling these cases."

The Monroe County Bar Association, which worked with the county to establish the Conflict Defender's Office, met with county officials to discuss its concerns with the potential change. But officials with the Bar Association wouldn't say what their concerns are.

"The Monroe County Bar Association raised its concern that any delivery system of legal services to the indigent accused be of the highest quality," association President Diane Cecero said in an e-mailed statement. "We were pleased to understand that Monroe County shared those concerns." 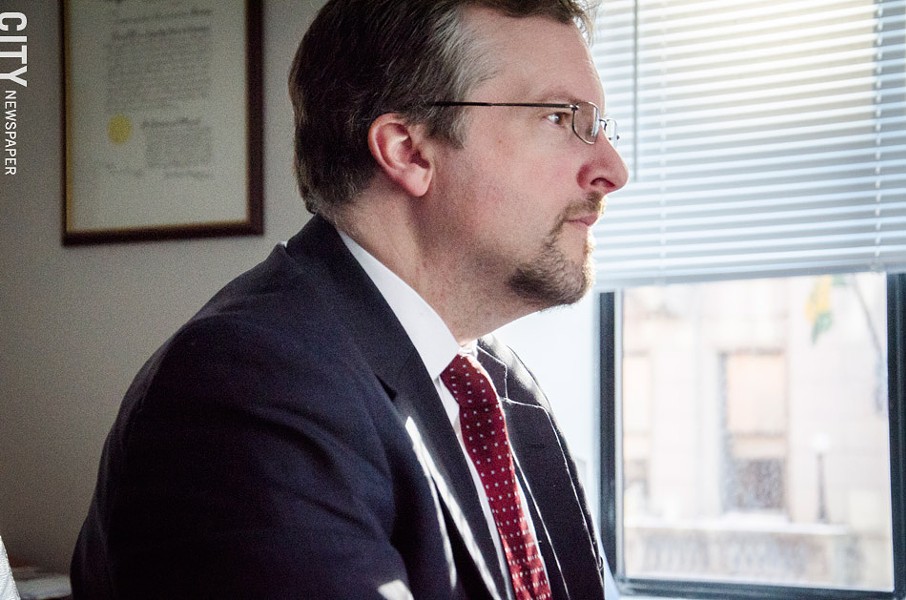 In 2007, the New York Civil Liberties Union filed a class-action lawsuit challenging the adequacy of New York's indigent legal defense system. After years of winding its way through the legal process, the lawsuit will go to trial in September. (Monroe County is not part of the lawsuit.)

In simple terms, the lawsuit argues that the state has failed its obligation to provide effective legal defense for poor people accused of crimes. And that it has left that job to counties, but has failed to provide the counties with adequate funding. One of the lawsuit's key supporting arguments is that defendants in town and village courts haven't always been provided with attorneys at arraignment. A previous court ruling in the lawsuit says that the failure to provide attorneys at arraignments could be a violation of defendants' constitutional rights, says Corey Stoughton, NYCLU's lead attorney on the case.

"What needs to be fixed, fundamentally, is that the state needs to better fund and better oversee the public defense system," she says.

In response to some of the issues raised in the lawsuit, including the arraignments problem, state officials formed the Office of Indigent Legal Services. And in an effort to provide attorneys at more arraignments, the office issued grants to 25 counties.

The Monroe County Public Defender's Office was one of the grant recipients. It's using the money to provide attorneys for arraignments every day of the week from 8 a.m. to 8 p.m., starting March 1.

In the town and village courts, arraignments often happen outside of scheduled court sessions, says Donaher, the public defender. In those instances, a judge has to be called in.

For a variety of reasons, including staffing shortages and lack of resources, no public defender's office upstate has consistently provided attorneys for the impromptu arraignments.

The new arrangement will potentially cut down the time defendants spend in police custody waiting for bail to be set, Donaher says. When a judge is called in to oversee an arraignment, he says, the authorities will be able to call in a public defender, too.

NYCLU's Stoughton says it is critical that anyone accused of a crime have an attorney at arraignment. In some cases, she says, defendants have pleaded guilty at arraignment before consulting a lawyer. (Many judges, however, won't accept guilty pleas at arraignment.)

But for many people charged with a crime, whether a judge sets affordable bail can be a life-changing moment. If it's set too high, or denied, defendants will spend time in jail awaiting trial. And that could motivate people to plead guilty just to get their sentence reduced. In the meantime, Stoughton says, they may lose their jobs or custody of their children.

"For most people, that's the whole game when it comes to being charged with a crime," Stoughton says.

For some indigent defendants, a guilty plea or conviction can mean complications with their immigration status.

It used to be that defense attorneys weren't obligated to discuss these consequences with their clients, says Drew DuBrin, the Monroe County Public Defender's Office in-house immigration law expert.

But a 2010 Supreme Court decision changed that. The decision says that defense attorneys must fully inform their clients about the consequences that a guilty plea or conviction could have on their immigration status.

To address this issue, the state Office of Indigent Legal Services plans to fund regional immigration assistance centers for defense attorneys who represent the poor. The centers will serve as resources for immigration law guidance and training.

Donaher, working with public defenders in nearby counties, says he plans to apply for funding to set up a regional immigration law advisory center; the location hasn't been selected. The defenders are waiting for the Office of Indigent Legal Services to officially open the application process, Donaher says, which is supposed to happen this winter.

Public defenders often deal with clients who are not citizens, DuBrin says, though most are in the country legally. DuBrin, who is the special assistant public defender in charge of appeals, says he consults on immigration matters at least once a week.

Immigration law, particularly when it intersects with criminal law, can be complex and confusing. And the consequences from a plea or conviction can be equally complicated and sometimes counterintuitive.

"It's just too complex and the consequences are just too great," DuBrin says.

For example, consider the difference between charges for possessing a small amount of pot and driving while intoxicated. Criminally, the pot charge carries a much lighter penalty. But a conviction or guilty plea for unlawful possession of marijuana automatically bars a person from getting a green card, DuBrin says. A person who pleas to or is convicted of driving while intoxicated can still get a green card, he says.

DuBrin says the immigration law advisory center sounds like a good idea, partly because it'll serve defense attorneys for the poor outside of public defender's offices. But fundamentally, he says, the concept is about ensuring that attorneys can get fair and just results for their clients.

That sense of fairness and justice for anyone accused of a crime is what the Supreme Court's Gideon v. Wainwright decision was rooted in. Similarly, it's the underlying issue in the NYCLU's lawsuit and the efforts to provide poor people with attorneys at arraignment.

"In the adversarial system of justice, we rely on public defenders to ensure that the right outcomes happen when a person is charged with a crime," says NYCLU's Stoughton.