For the dog days drinks, head to Brindle Haus

PHOTO BY JACOB WALSH If you like pilsners and and schnauzers, head over to Brindle Haus.
Truth be told, there’s no better drinking companion than a good dog.

They’re always down to order food, they don’t judge when you dip into your third barleywine of the evening, and, at least in my case, they’ll seldom walk away when you dive into your inevitable rant about why “The Lonesome Crowded West” is the best Modest Mouse album.

In Rochester, there are plenty of places to mingle with pups in the sunshine while you have your brews, but if you’re looking to belly up to a bar with a furry friend, your brewery options are slim.

For that, Brindle Haus Brewing Company on South Union Street in Spencerport is your best bet. There, patrons are not only permitted to bring their dogs inside, but are actively encouraged to do so.

What better day to do that then July 31, which is recognized as Mutt's Day. Of course, it's also recognized as Cotton Candy Day, National Avocado Day, and Shredded Wheat Day. Godspeed to your stomach if you try celebrating them all.

On a recent afternoon, a four-legged pal could be found in just about every corner of the place. There was Miso, a brown and black mixed breed, lounging on the floor.

There was Maya, a terrier, propped up in her owner's arms. Tucker, a Spaniel, curled up next to the bar.

Hanging around for the better part of the day was Mia, the gray pit bull belonging to the brewery’s husband and wife co-owners, John and Kristine Boothe, who have long been involved in rescuing pit bulls.

Last March, their brewery released an India Pale Ale in cans featuring the mugs of 12 dogs at the Verona Street Humane Society, with proceeds going to the shelter. Brindle Haus plans to revive that project again in the coming months. The brewery also sells glassware and other gear benefiting rescues, specifically those that provide service to pit bulls.

“For us, it was always about living the best of your life, and for us, that’s friends, family, and of course, your dogs,” John Boothe said. 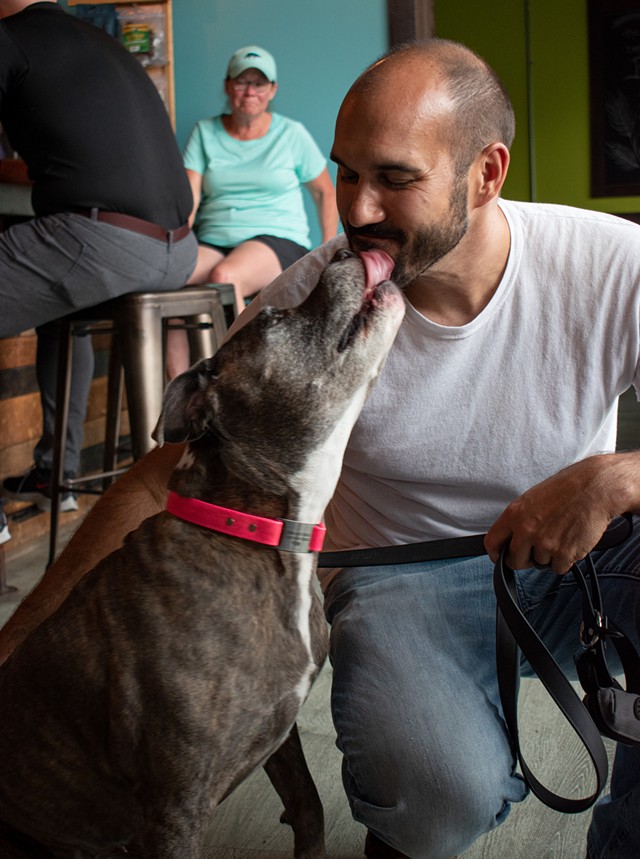 While places like Three Heads, Sager Beer Works, and Swiftwater allow dogs on their patios, dogs are verboten inside.

Triphammer Bierwerks in Fairport and Nine Maidens on University Avenue had long welcomed dogs in their breweries, but that is in the process of being phased out. Both breweries are planning on opening restaurants in the coming months — and dogs will no longer be allowed inside. (On a side note, having tasted several dishes from Nine Maidens’ test kitchen, the restaurant is something to be excited about.)

Triphammer has already stopped allowing dogs in. Scott Denhart, the owner, put an end to it upon re-opening after the pandemic-induced shutdown. As it turns out, introducing a dog to a roomful of people drinking beer tends to send compliance with physical distancing rules out the window.

Denhart added that having animals in breweries feels to him like it falls into a legal area where there is no specific guidance.

“I’ve had [the New York State Department of Agriculture and Markets] in here once a year checking things out, and they saw that I had doggy bowls and signs on the wall, never said a thing,” Denhart said. “It still doesn’t mean it’s okay.”

Executive Director of the New York State Brewers Association Paul Leone offered some clarity on the issue: as it stands right now, allowing dogs inside is up to the owner of the brewery.

Brindle is a coat pattern in animals, particularly dogs, marked by subtle streaks of color. As though its name weren’t a dead giveaway for its affection for canines, Brindle Haus baked dogs into its business model from day one.

When asked why the brewery intertwined beer and dogs, Boothe offered up a simple answer

Simple, unpretentious, and decidedly Belgian-influenced wheat beer with a panache of estery yeast on the finish. An idyllic crusher in the harsh summer heat.

While Brindle Haus caught the fructose-starved affection of Rochester craft beer hipsterdom with their “Brewcy Fruit” fruited sour ale series, it’s the traditionalist roots of the brewery that shine in the taproom. Biscuity, nuanced malts make way for a crispy Hallertau and Saaz hop finish.

A couple years back I spilled a whole jar of turmeric on my countertop and proceeded to wipe it down with water. Dumb move! Don’t do this unless you want to Simpsonify your kitchen. Anyway, this beer is delightfully ripe with zesty citrus notes and subdued spice that are complex yet light, balanced, and endlessly refreshing.

Old but new! The latest edition of Three Heads’ beast of a triple West Coast-style IPA heads east a bit with a touch of hazy, New England influence. Deceptively easy-drinking for a 10 percent brew and absolutely brimming with notes of candied stone fruit and Haribo gummies finishing with a viscous, pithy climax.