Beer is a hedonistic indulgence in its heart and soul, as nothing more than a frothy helping of lovely, empty alcoholic calories and unadulterated carbohydrates. Top off that with a simply absurd amount of puréed berries and heaps of milk sugar, and you're left with a sinfully decadent glass of off-fuchsia excess.

It's nice when you can quell your guilt a little bit by knowing a beer like that is going to a good cause. 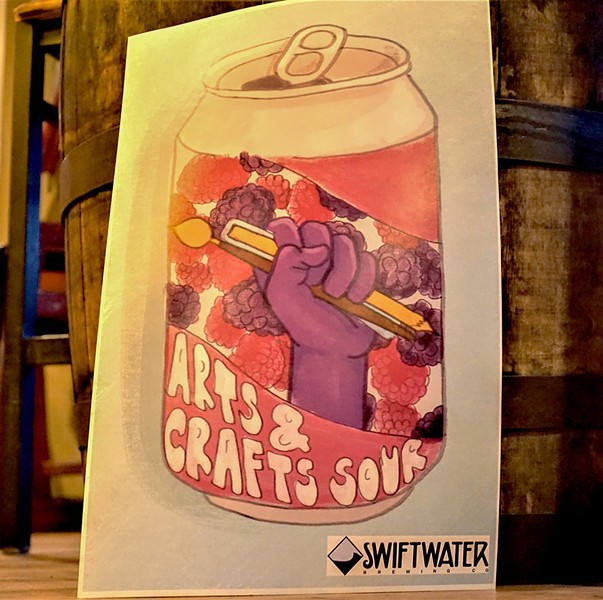 That brew, dubbed Arts & Crafts, is Swiftwater Brewing Company's newest foray into the trendy fruited-sour category. A collaboration with fellow South Wedge beer mainstay Tap and Mallet and the Rochester Education Foundation, all proceeds from the sale of Arts & Crafts will go toward the foundation's Arts for All Fund, which provides free summer music and arts courses for RCSD students.

Swiftwater isn't alone in the beer world on that front — on Saturday, Three Heads also held a fundraiser for the foundation, releasing Arts for All, an IPA with proceeds going towards the fund.

Arts & Crafts, meanwhile, is a sweet reward for your charity. Swiftwater is well-known locally for sour staples like The Knowledge is Sour series and Is This Beer? And while those beers are liberally fruited, there is at least some restraint as to not overpower the base beer.

This is not one of those beers.

Arts & Crafts is jam-packed (pun very intended) with a borderline irresponsible amount of blackberries and raspberries, leaving behind a drink that is more smoothie than beer. A hefty dose of lactose bumps up the sweetness well into the "drinkable pie" category, with a nice dash of tartness to even things out. It's a lesson in maximalism that also shows a surprising attention to balance.

And at a modest 6 percent, it also leaves some room for a second, or third.

It is, after all, for the children.